‘Lady Lazarus’ is one of a group of poems that Sylvia Plath composed in an astonishing burst of creativity in the autumn of 1962. That summer she and her husband Ted Hughes had separated after seven years of marriage. Plath found herself alone with two very young children in Court Green, the old thatched house in the village of North Tawton, Devon, which she and Hughes had purchased in August of 1961. Hughes was mainly in London, where he had embarked on an affair with Assia Wevill. Many of the most famous poems eventually published in Ariel (1965) were written in Court Green in the wake of these disastrous events, although the only time Plath could find to write was between 4 a.m. and 8 a.m. each morning, before her children awoke. During the extraordinarily productive last week of October (in which she turned 30) she composed 11 poems, including the first drafts of ‘Lady Lazarus’. These poems, like her letters from this period, record how her moods swung from elation to despair, from extreme rage to excited belief in her ability to ‘make a new life’, as she put it in a moment of optimism when writing to her mother on 16 October: ‘I am a genius of a writer; I have it in me. I am writing the best poems of my life. They will make my name.’[1] 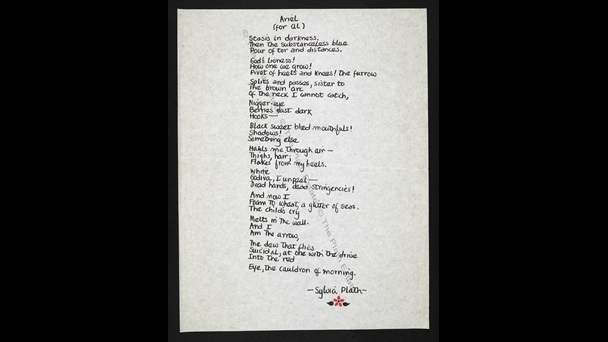 Usage terms © Estate of Sylvia Plath. No copying, republication or modification is allowed for material © The Plath Estate. For further use of this material please seek formal permission from the copyright holder.

The art of dying

The title ‘Lady Lazarus’ refers to the New Testament account of Jesus’s resurrection of Lazarus from the dead. Plath’s inspiration for this may have been the lines in T S Eliot’s ‘The Love Song of J. Alfred Prufrock’ in which the dithering hero imagines himself as ‘Lazarus, come from the dead, / Come back to tell you all’. Plath’s ‘Lady Lazarus’ also, however, explicitly refers to her own biographical history. In the summer of 1953 she had taken an overdose of sleeping pills and hidden in the crawl space beneath the downstairs bedroom in her family home in Wellesley, Massachusetts, where she was eventually discovered by her brother Warren and her mother Aurelia. It is to this suicide attempt, as well as to a swimming accident that nearly cut short her life when she was ten, that she refers midway through the poem:

The first time it happened I was ten.
It was an accident.

The second time I meant
To last it out and not come back at all.
I rocked shut

As a seashell.
They had to call and call
And pick the worms off me like sticky pearls.

The poem anticipates yet another dicing with death, ‘Number Three’, from which, she predicts, she will again emerge like the phoenix from the ashes, though this time as a vampiric, female avenger:

Out of the ash
I rise with my red hair
And I eat men like air.

In fact her next suicide attempt, in the early hours of 11 February 1963, would succeed.

There is a charge

In her late work Plath often appropriates imagery from a startling and, at times, troubling range of sources in order to heighten the emotional intensity and expressionist violence of her poetry. She implicitly justified the various references that these poems make to the Holocaust in a letter of 21 October, again to her mother: ‘What the person out of Belsen – physical or psychological – wants is nobody saying the birdies still go tweet-tweet, but the full knowledge that somebody else has been there and knows the worst, just what it is like’.[2] When, in the second and third stanzas of ‘Lady Lazarus’, she claims her skin is ‘Bright as a Nazi lampshade’, that her face is a ‘fine / Jew linen’, she is provocatively asserting her right to compare her ‘psychological’ Belsen with the experiences of those condemned to real Nazi concentration camps. This has outraged some critics, while others, such as George Steiner, have commended her development of a poetic idiom capable of responding to the horrors of 20th-century history. What makes her references to such atrocities so disturbing is their incorporation into a poetic performance that also deploys the language of advertising, mass spectacle and pornographic self-display – the ‘big strip tease’ that the ‘peanut-crunching crowd / Shoves in to see’. The poem figures the crowd’s fascinated eyeing of her body parts and fingering of her blood as part of a debased, commercialised martyrdom. The reader, in a further irony, becomes uncomfortably aware that she or he is also one of the ‘peanut-crunching crowd’ lured into marvelling at the terrible wounds and scars that the poem tauntingly chooses to parade; and that while the narrator apparently derides and parodies the ‘theatrical’ exploitation of suffering, ‘Lady Lazarus’ makes use of the very techniques that it mocks and elicits precisely the curiosity that it condemns, in order to deliver its ‘charged’ narrative of victimisation and revenge.

Plath wrote before radical feminism had begun to challenge the patriarchal assumptions that governed many aspects of Western society in the post-war era. A number of her late poems, however, mount a vitriolic – though at times conflicted – attack on the myths underpinning the conventions of male dominance. It is striking that in the drafts of ‘Lady Lazarus’ in the Plath Collection at Smith College, the male antagonist is initially presented not only as ‘Herr Enemy’, ‘Herr Lucifer’ and ‘Herr Doktor’ (that is, an evil doctor in a Nazi concentration camp), but as ‘My Great Love’.[3] Plath revised such ambivalences out of successive drafts, and chose to develop Lady Lazarus into a ruthless heroine rather than a wronged and grieving wife. Yet it is clear from the introduction that she made to a recording of the poem for the BBC in December of 1962 that Plath conceived of her speaker as performing her anger in a deliberate, self-conscious way, indeed as a stage in a regeneration myth:

The speaker is a woman who has the great and terrible gift of being reborn. The only trouble is, she has to die first. She is the phoenix, the libertarian spirit, what you will. She is also just a good, plain, very resourceful woman.[4]

Despite her incandescent rage, Lady Lazarus never manages to imagine herself escaping entirely from a relationship with ‘Herr Enemy’: he is needed as both witness to her appalling immolation (‘Ash, ash – / You poke and stir. / Flesh, bone, there is nothing there –’) and as one of the future victims of her reincarnated vampiric self: ‘Beware / Beware’ she threatens him, assuming the role of the transgressive visionary seer of the end of Samuel Taylor Coleridge’s ‘Kubla Khan’ (‘And all should cry Beware! Beware! / His flashing eyes, his floating hair’). This allusion helps to give the incantatory rhymes of Plath’s closing lines (‘Herr Lucifer / Beware / Beware / red hair / like air’) a dangerous uncanny power, as of a spell or a curse.