Looking at examples such as The Germ and Blast, Richard Price examines the defining characteristics of little magazines and their legacy within literature, art, and culture.

A ‘little magazine’ is a literary magazine which, typically, attracts only a small number of readers. Circulation can be numbered in the low thousands, or, as likely, in hundreds or even in tens.

Characteristically, little magazines last only a few years, or even less. Looking back, this can seem surprising because in classic magazines those they publish have since become so famous, influential or popular – or their ideas have.

One good example of this is The Germ, published in 1850, and whose title is used in the sense of a ‘seed’ germinating rather than anything biologically aggressive. A little magazine called The Germ today would be more likely to use the term with a dystopian frisson but The Germ of the 19th century celebrated nature. It was the magazine of the Pre-Raphaelites. They looked back, controversially, to medieval approaches in painting as a way, they hoped, of renewing English contemporary art. If you think of the 15th-century artist Botticelli’s painting Primavera, you can see some of the co-ordinates the Pre-Raphaelites took their bearings from. It is a mythological painting – the fertility of spring is embodied in the pregnant figure of Primavera – but it also attempts an almost scientific exactitude in the intricate flowers on the forest floor and the fruits in the forest canopy. The Pre-Raphaelites wanted to go back to such an approach, which stressed mythical, even religious storytelling at the same time as keen observation of the natural world. 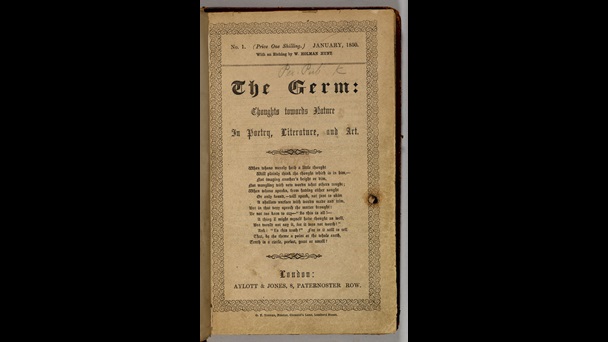 Front cover of Pre-Raphaelite journal The Germ, 1850, which set out the group’s vision and included art, poetry and essays.

This was far from a consensus view in their day, but in time the work of Pre-Raphaelite artists – such as William Holman Hunt, John Everett Millais and Dante Gabriel Rossetti – became very popular. Public perspective on their work has moved from perceiving them as in an almost experimental position, even if a backward-looking one, to what is sometimes criticised today for technical shortcomings and, for example, troubled gender politics.

Their little magazine, The Germ, was published to promote their ideas and poetry. It only lasted four issues, all published in the single year of 1850. Since then, books, articles and exhibitions about their work have been legion, a measure of how the public’s imagination took time to catch alight. Today, who hasn’t heard of Pre-Raphaelite art?

The best little magazines inspire others to think and read differently, to write in new ways and in turn to make their own magazines. 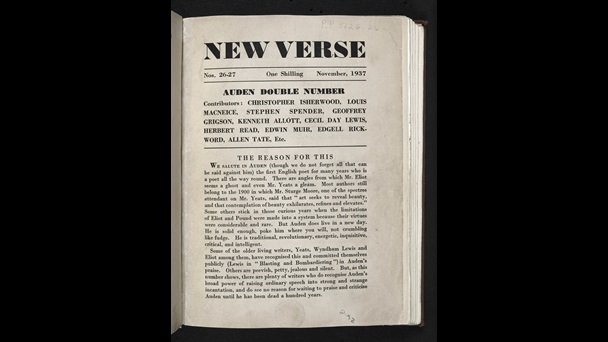 New Verse, edited by Geoffrey Grigson, was one of the most influential little magazines during the 1930s.

Usage terms Christopher Isherwood: Copyright © Katherine Bucknell and Don Bachardy 2012, used by permission of The Wylie Agency (UK) Limited. Except as otherwise permitted by your national copyright laws this material may not be copied or distributed further. Anonymous photographer: This material is in the Public Domain.

More usually, little magazines champion particular styles of writing as well as art; for example in Britain in the 1930s, the Contemporary Prose and Poetry championed literary surrealism at a time when the experimental, or the continental, was hardly encouraged. The attention to the internal workings of the mind, and a sensitivity to the animal in humankind, was at times shocking.

Visual poetry – concrete poetry and its related forms – is another example of aesthetic ‘shock’ brought about by little magazines. Wyndham Lewis’s Blast, first published in 1914, borrowed techniques from the Italian Futurists and the French poet Guillaume Apollinaire to offer striking ‘list poems’, poster-like tallies of who and what the magazine regarded as ‘blessed’ and ‘blasted’ (cursed). These were a firm departure from the polite conventions of literary magazines, a fact signalled by the large size of the magazine, a use of modern sans serif typography, and even its bright pink cover. If Europe had the Futurists, Blast would have the Vorticists – fascinated by the energy of the whirpool.

BLAST no. 1, the Vorticist magazine 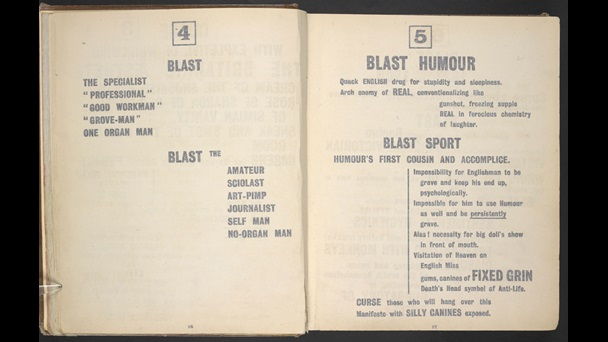 One of the visually striking ‘list poems’ from the first issue of Blast, 20 June 1914.

Usage terms Wyndham Lewis: © Estate of Wyndham Lewis. Except as otherwise permitted by your national copyright laws this material may not be copied or distributed further.

Edward Wadsworth: © Estate of Edward Wadsworth. All rights reserved, DACS 2016. Except as otherwise permitted by your national copyright laws this material may not be copied or distributed further.

Although blessing and blasting sounds like a sheep and goats exercise – drawing firm lines between the ‘good’ and the ‘bad’ – in fact Blast was ambiguous and contradictory in its judgements, almost as if sending up the idea of judgement in the first place. Blessed by Blast were, poetically, ‘all seafarers’, ‘Shakespeare’ (‘for his bitter Northern rhetoric of humour’) and nationalistically, ‘ENGLAND’ (but England was, however, also blasted (‘from politeness’)). Cursed were, poetically, ‘the flabby sky that can manufacture no snow’; the Post Office, the entire span of years Victoria reigned and, nationalistically, ‘FRANCE’ (which was also, however, blessed (‘for its bushels of vitality’)).

Later, in the 1960s, visual poetry became not only a means but a theme of little magazines, including the magazine Arlington and Bob Cobbing’s And. Each issue of Arlington was associated with an actual exhibition of concrete poetry at a gallery at Arlington Mill in Gloucestershire. The tone of concrete poetry in the 1960s was seldom that of shock but rather of play, of celebration and even abstraction. As with The Germ and the Pre-Raphaelites, the idea of art is often hovering close to the idea of a little magazine, as if the magazine is itself a series of ‘group shows’. 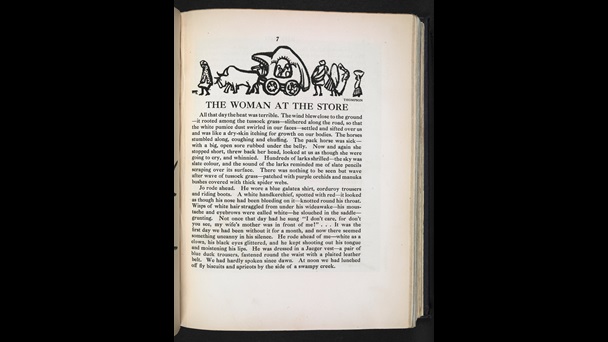 ‘The Woman at the Store’, a short story by Katherine Mansfield published in Rhythm, a little magazine that promoted both literature and the visual arts. Many of the artists it featured were later associated with Vorticism.

Usage terms Katherine Mansfield: This material is in the Public Domain.
Margaret Thompson, aka Marguerite Zorach: © Courtesy of the Zorach Collection, LLC. You may not use the material for commercial purposes. Please credit the copyright holder when reusing this work.

Sometimes little magazines, adding to their particular aesthetic take, concentrate on cultures or territories deemed hitherto under-represented in the literary and political environment at large. In the 1960s, when there was a general flowering of little magazines, Ian Hamilton Finlay’s title Poor. Old. Tired. Horse didn’t only champion visual poetry, it had a distinct penchant for underground American poetry as well. Its title, after all, is named after a line in the Robert Creeley poem, ‘Please’. Creeley was one of the more subversive American poets of his day.

At the same time, Modern Poetry in Translation, founded by Ted Hughes and Daniel Weissbort, particularly focussed on ‘importing’ Central and Eastern European poetry. A long-standing exception to the rule that little magazines tend to be shortlived, MPT, as it is affectionately abbreviated, continues to celebrate poetry from around the world. 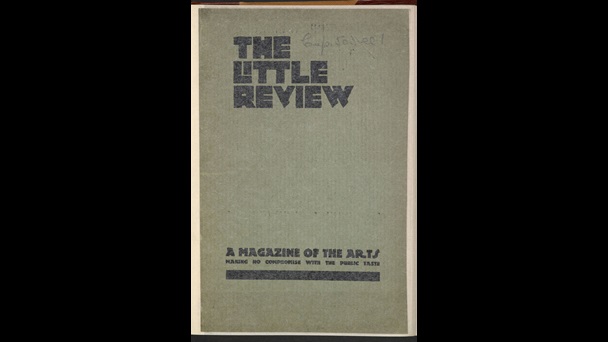 ‘Making no compromise with the public taste’: The Little Review was an American magazine that boldly published experimental, sometimes controversial work such as James Joyce’s Ulysses.

Little magazines are not just about their content, though. It is significant that The Germ styled itself as the magazine of the Pre-Raphaelite Brotherhood. This is something which an anonymous article in The Guardian newspaper picked up on at the time, when it lamented that The Germ was coming to an end:

It is a pity that the publication is to stop. English artists have hitherto worked each one by himself, with too little of common purpose, too little of mutual support, too little of distinct and steadily one whit more jealous than the followers of other professions. But they are less forced to be together, and the little jealousies which deform the natures of us all have in their case, for this reason, freer scope, and tend more to isolation. Here, at last, we have a school, ignorant it may be, conceited possibly, as yet with but vague and unrealised objects, but working together with a common purpose, according to 15 certain admitted principles, and looking to one another for help and sympathy. (The Guardian, 20 August 1850)

The assertion of the magazine as a collective activity – even, in extreme cases, of friendship as close as family – can be very important to these magazines. This is not to say they are all purely progressive in outlook. For example, The Germ’s use of the word ‘brotherhood’ in a way suppresses the idea of ‘sisterhood’ and, despite the masculine label, it is notable that some of the earliest poetry of Christina Rossetti, arguably the finest Pre-Raphaelite poet, was actually published in The Germ (the magazine was, after all, edited by her real brother, William).

World War One patients at Craiglockhart

Sometimes it is through publication that friendship prospers, and this is the case with Hydra, a little magazine in a way. Hydra was edited and written by World War One patients at a Scottish hospital in Craiglockhart, just outside Edinburgh. The hospital had formerly been a ‘hydropathic’ institution, offering various kinds of water-centred therapies for the ill, and so ‘Hydra’ is a play on the hospital’s origins. Hydra was itself envisaged as a kind of therapy – traumatised servicemen could find their way back out of shell shock, it was felt, by writing and collaborating in the process of publication. By working on Hydra the poet Wilfred Owen, a patient there, further developed his poetry, mentored by Siegfried Sassoon, a fellow patient. It is difficult to imagine that poems as powerful as ‘Dulce et Decorum Est’ could have emerged without the friendship catalysed by Hydra.

Front cover of The Hydra, November 1917 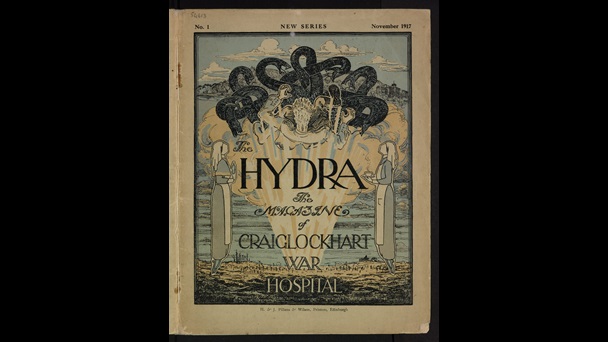 Wilfred Owen edited and contributed poetry to the Hydra magazine while a patient at the Craiglockhart hospital.

Even if there is not real friendship among contributors – and the literary world can be as spiky a place as any – simply by being the collaborative and selectively distributed objects they are, little magazines advance positive ideas of community and specialised networks (sometimes as a corrective to and attack on the specialised network of the Establishment). Today’s world of printed and online ‘zines’ are the inheritors of the little magazine ethos of network-building, sometimes politicised as with feminist zines. Little magazines and zines alike offer publicly the idea that editors, contributors and readers, in various exhilarating configurations, can develop through the ‘conversation’ of publication a new vision of art and literature, and even of society – the conversation is itself the idea.