An introduction to A Room of One's Own

Professor Rachel Bowlby examines A Room of One’s Own as a key work of feminist criticism, revealing how Virginia Woolf ranges beyond the essay’s official topic of women and fiction to question issues around education, sexuality, and gendered values.

What kind of a book is Woolf’s A Room of One’s Own? Opening it first at the description of meals at two Oxbridge colleges, you might think this was some sort of eccentric TripAdvisor review: men’s college dining, halfway to heaven; women’s college dining, one star. At other points, you could take it for an extended list of recommendations for future research, on topics never mooted before for serious study: the everyday lives of middle-class women in other times, or the history of men’s opposition to women’s emancipation, or the value that men place on female virginity. Sometimes Woolf’s suggestions for study sound like a preliminary report on these and other subjects, with information (and exasperation) gleaned from a morning’s reading of works by men on the subject of women. (This reading takes place at the British Library, in its earlier location at the British Museum.)

There is a lot in A Room of One’s Own about literature – about what it says about women (when it’s written by men), about what kind of writing women writers have done or have not been able to do, and about whether writing is helped or hindered by an author’s conscious sense, when writing, of being either a he or she. At the same time – and this ties in with all the suggestions for research – there’s an emphasis on how writers of any sex, but women in particular, need a solid minimum of material support in order to do their job (or create their creation): in order to think, that is, without interference (or ‘impediments’, to use Woolf’s preferred word). Woolf sets this material requirement quite high. Every woman, ideally, should have an annual income of £500 (which was a comfortable middle-class man’s salary at the time). And she should also have that now famous space, a room of one’s own.

A Room of One's Own by Virginia Woolf 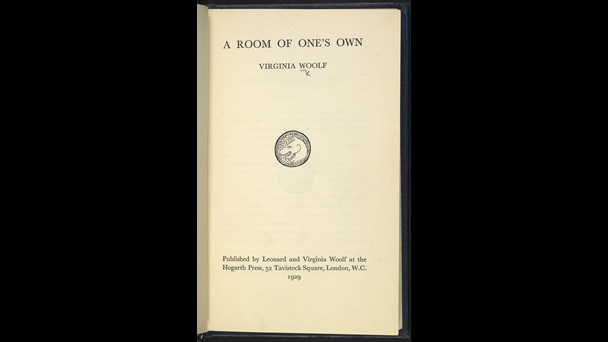 Title page from the first edition of A Room of One’s Own by Virginia Woolf, published by the Hogarth Press in 1929.

The founding text of feminist criticism

Putting together these various features, we might think we can confidently say that what we are dealing with in A Room of One’s Own is a piece of feminist criticism. But in the late 1920s, when it was written, there was no such thing – or at least, there was no established name or practice to give currency or legitimacy to such a notion. In fact, A Room of One’s Own started all sorts of balls rolling – or picked up on nuggets of proto-feminist thought that were barely noticed as such until Woolf took them up and gave them a push on their feminist way. That would lead, by the end of the 20th century, to feminist criticism being a practice of thinking about literature and daily life which requires no special justification (and which is now part of school and university syllabuses in history and literature, to name the two disciplines closest to Woolf’s concerns here). Reading as we do almost a century after Woolf wrote the two lectures on which A Room of One’s Own is based, it is virtually impossible for us to think ourselves back into the world within which she was writing, in which girls and women, as she points out, were almost wholly excluded still from serious academic education at any level, and had only just (in the past 10 years) acquired the vote and the right to practise a profession.

Letter from Virginia Woolf to Frances Cornford about A Room of One's Own, 1929 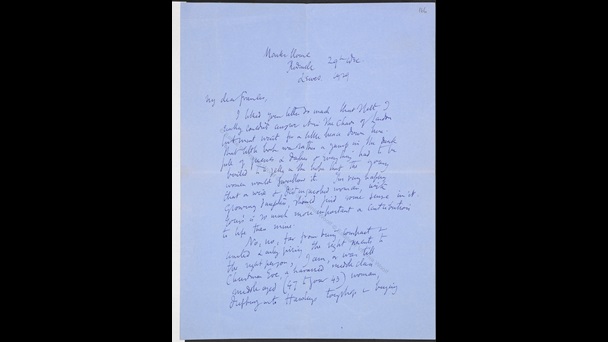 In this letter from 1929 Virginia Woolf describes A Room of One's Own as ‘rather a jump in the dark full of guesses + dashes’.

It would be no exaggeration, in fact, to say that A Room of One’s Own is the founding text of feminist criticism. Not that it was the first British feminist book (most notably, there is Mary Wollstonecraft’s A Vindication of the Rights of Woman as far back as 1792), or the first piece of feminist critique of literature by men or women (for a wonderfully witty mid 19th-century example, there is George Eliot’s essay, ‘Silly Novels by Lady Novelists’). The book’s official subject is women and writing: that was the topic on which, as Woolf says, she was asked to give the lectures. And A Room of One’s Own succeeds, in the smallest of spaces, between its two covers if not its four walls, in broaching just about all the philosophical and historical and specifically literary questions about that topic that have been offered in the many decades since its original publication. Is women’s writing inherently different from men’s? And if so, are men inherently – psychologically as well as physically – different from women? Or is women’s writing different only because women’s social or economic situation has been so different from men’s? How much of the territory of women’s experience is unrepresented, never before shown in literature? And might some of it be unrepresentable in any case within the sentences of our present language?

For instance, Woolf asks, has any writer, man or woman, ever before written about relationships between women, apart from their further attachments to men? Here Woolf has fun teasing her all-women audience: ‘Do not start. Do not blush. Let us admit in the privacy of our own society that these things sometimes happen. Sometimes women do like women’ (ch. 5). Or why are there not more books about the lives of ordinary women? Why is it that woman has been revered – or debased – in literature, one or the other; and virtually absent from historical records? Is the reason that women have not (yet) written great literature, insofar as they haven’t, that they don’t acquire the wide experience that (well-to-do) men take for granted? (Put bluntly, men travel the world, while women are stuck in the home.) Or is it less a matter of social and geographical spaces, and more a problem of the words themselves: that the language available for women to write in accords with male and not female values? So that it would be necessary to wrench or remake the forms of words in order to speak with a woman’s voice, or to represent women’s experience.

Monday or Tuesday by Virginia Woolf 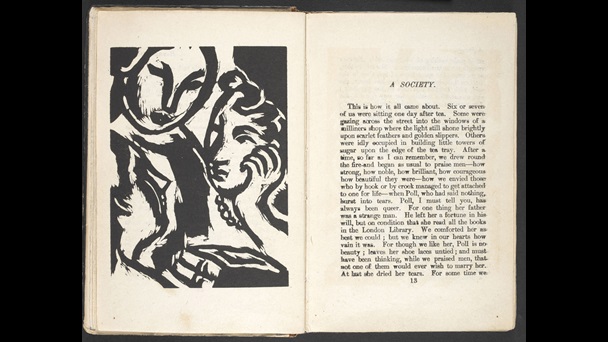 Anticipating A Room of One’s Own (1929), Virginia Woolf explored ideas around gender, knowledge and power in the 1921 short story, ‘A Society’.

Usage terms Virginia Woolf: This material is in the Public Domain. Vanessa Bell: © Estate of Vanessa Bell, courtesy of Henrietta Garnett. Except as otherwise permitted by your national copyright laws this material may not be copied or distributed further.

For if language might already be tilting the understanding of things to a masculine focus, then that must inevitably distort the way that women are able to formulate their own thoughts. Closely related to this is what Woolf calls ‘the difference of value’, epigrammatically exemplified by the case of football vs shopping. ‘Speaking crudely’, Woolf says, ‘football and sport are “important”; the worship of fashion, the buying of clothes “trivial”. And these values are inevitably transferred from life to fiction’ (ch. 4). Later on, she starts to subvert these values herself, by taking her reader shopping: ‘For in imagination I had gone into a shop; it was laid with black and white paving; it was hung astonishingly beautifully with coloured ribbons’ (ch. 5). Having shown and shared the sensual and aesthetic pleasures of this feminine space, a larger and public room of one’s own, she then turns round and looks from another angle than that of the happily enjoying consumer:

And there is the girl behind the counter too – I would as soon have her true history as the hundred and fiftieth life of Napoleon or seventieth study of Keats and his use of Miltonic inversion, which old Professor Z and his like are now inditing. (ch. 5)

It is another subversion of the values (lives of unknown working women, rather than yet more lives of famous men and their influence on each other), but the way it’s presented, through the inviting and surprising look inside the beautiful store, is characteristic of Woolf’s deceptively drifting method throughout this text. She appears to be giving you simple thoughts as they occur to her, one by one and place by place. In reality, she is changing all the directions and expectations for what counts as a valid way of presenting opinions on the erratic, elusive, impossible subject of women and fiction.