An introduction to The Birthday Party

Michael Billington recounts the strong reactions that critics had to early performances of The Birthday Party, and examines the way that Pinter's play engages with ideas about menace, memory and political resistance.

I shall never forget my first experience of Harold Pinter's The Birthday Party. It was the spring of 1960 and I was a student. One night I noticed Pinter's play was being shown on commercial television. I knew it had been trashed by the London critics when it first appeared on stage at the Lyric Hammersmith in 1958. But, sitting in front of the television, I was mesmerised by this story of a strange recluse, Stanley, who is living in a seaside boarding house and finds himself taken away by two mysterious visitors. One scene, in particular, haunts me still. Stanley sits in a chair while the visitors fire a barrage of questions at him. The scene was shot from Stanley's point of view so that the faces of his interrogators filled the screen. Suddenly one got a sense of what it must be like to be subject to brutal intimidation.

Censored script of The Birthday Party by Harold Pinter 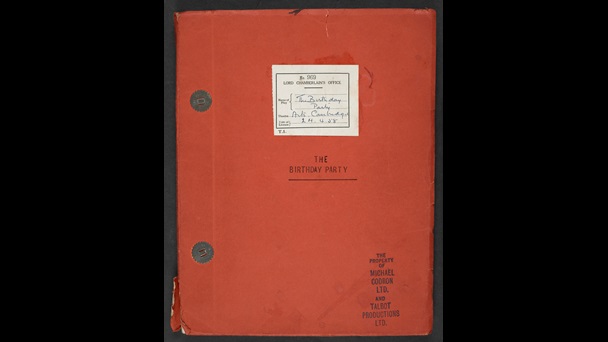 Stanley sits in a chair while the visitors fire a barrage of questions at him. The famous interrogation scene in The Birthday Party.

Usage terms Harold Pinter: © Fpinter Limited is the copyright owner of THE BIRTHDAY PARTY by Harold Pinter. All rights reserved. You may not reproduce these Materials in whole or in part for any purpose whatsoever.  Lord Chamberlain's Office: © Crown Copyright. This material has been published under an Open Government Licence.

The Birthday Party may have been a theatrical failure in 1958 but by the time of his death in 2008 Harold Pinter had become one of the most famous dramatists in the world. Plays such as The Caretaker (1960), The Homecoming (1965), Old Times (1971), No Man's Land (1975) and Betrayal (1978) were constantly revived. Pinter's later plays, including One For The Road (1984), Mountain Language (1988) and Ashes to Ashes (1996), combined a minimalist technique with political anger in a way that made a profound impact in countries that had experienced oppression. Pinter was also a prolific screenwriter and was showered with awards, culminating in the Nobel Prize for Literature in 2005. But, although Pinter's later work brought him fame and prestige, what is fascinating is to discover in The Birthday Party signs of his abiding obsessions. Above all, it now looks like a classic statement of Pinter's belief in the power of political resistance.

Photographs of The Birthday Party by Harold Pinter, 2008 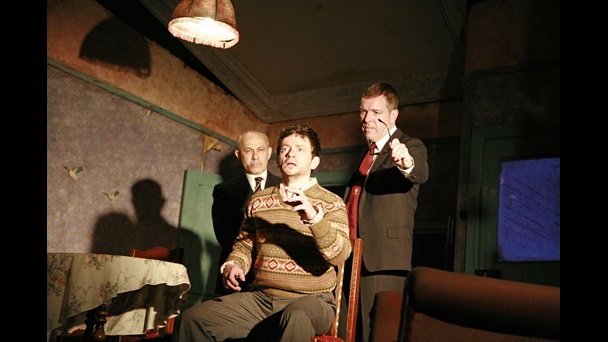 McCann snatches Stanley’s glasses in the interrogation scene of The Birthday Party in the 2008 production of the play at the Lyric Hammersmith, directed by David Farr.

That wasn't necessarily how it was viewed at the time. Many people in 1958 were baffled and bamboozled by the play. Yet, like all Pinter's work, it had its origins in personal experience. In interviews Pinter recalled how, as a young actor in the mid-1950s, he had been on tour in a terrible farce called A Horse, A Horse. Arriving one wet night in Eastbourne, he found himself forced to take grotty digs and share an attic with a chap who claimed to have been a concert pianist and who was always being tickled and tousled by the voracious landlady. When Pinter asked the man why he stayed, he replied ‘There's nowhere else to go’. Out of that remark came the idea for The Birthday Party.

Needless to say, the finished play is not a literal transcription of reality. But it is set in seaside digs and it does show a smothering landlady, Meg, dishing up breakfast to her sole lodger, the truculent Stanley. But the stakes are raised when Stanley learns that two visitors are coming to stay. They turn out to be Goldberg, who has the surface bonhomie of a Jewish uncle, and McCann, a moody Irishman who likes to sit at the table tearing a sheet of newspaper into five equal strips. To Meg, they are welcome guests. To Stanley, they pose a visible threat. A birthday party they arrange for him turns into a nightmare with Stanley's attempted rape of a fellow guest Lulu. By the next morning, the debris has cleared and a besuited Stanley, whose tongue has been badly maimed, is taken away by Goldberg and McCann to an unknown destination. 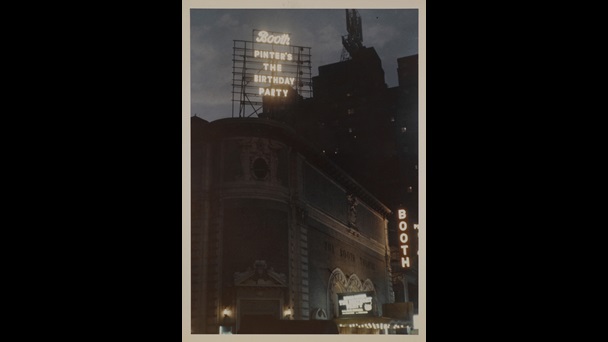 The Booth Theatre where The Birthday Party had its New York premiere in 1967, directed by Alan Schneider.

It is intriguing to chart the play's early history. In 1958 Pinter was a struggling actor whose only previous work, The Room, had also dealt with a disturbing intrusion into domestic order. Performed by Bristol students, the play attracted the attention of a West End producer, Michael Codron, who eagerly decided to present The Birthday Party. Before reaching London, it toured Cambridge and Oxford where it was joyously received by student audiences and critics. One Oxford paper invoked Hemingway's story ‘The Killers’, about a renegade hiding away from a pair of mobsters. Another paper said: ‘It is brilliant, baffling and bizarre – Kafka, almost spiced with humour’.

Then came London and, with one striking exception, a critical massacre. The unidentified critic of the Manchester Guardian wrote ‘What all this means only Mr Pinter knows, for his characters speak in non-sequiturs, half-gibberish and lunatic ravings’. W A Darlington in The Daily Telegraph, noting that one of the characters was a depressed, deckchair attendant, added ‘I can give him one word of cheer – he might have been a dramatic critic condemned to sit through plays like this’. The play closed on the Saturday night. The next day in the Sunday Times, however, Harold Hobson wrote a rave review that compared the play to Henry James's The Turn Of The Screw, in its impalpable, hair-raising terror. ‘Mr Pinter,’wrote Hobson, ‘has got hold of a primary fact of existence. We live on the verge of disaster’.

That review not only attracted the attention of BBC Radio bosses who immediately gave Pinter commissions; it also had a big influence on early perceptions of Pinter: Irving Wardle, reviewing Pinter's play in a theatrical magazine, coined the phrase ‘comedy of menace’. And it is perfectly true that The Birthday Party is filled with intimations of horror. Stanley tries to frighten Meg with the idea that she will be carted away in a wheelbarrow. He himself perceptibly starts when told that two gentlemen are coming to stay. Even the psychotic McCann, after Stanley has been subjected to a night of torture in his bedroom, announces ‘I'm not going up there again’. The notion of Pinter as a prime purveyor of menace has long stuck; as has the idea, given his ability to wrest drama from the gaps in everyday speech, that he is a master of the pause.

Review of The Birthday Party by Irving Wardle 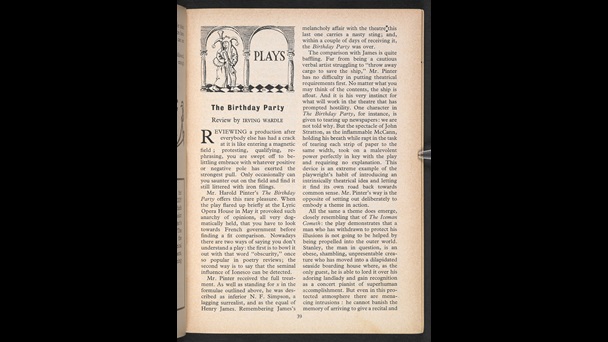 Wardle famously coined the term ‘comedy of menace’ to describe The Birthday Party. Though funny on the surface, the play is loaded with ambiguity which creates an unnerving atmosphere of doubt and fear.

But, while The Birthday Party is full of Pinter trademarks, it has a larger significance. In writing a biography of Pinter, I discovered that he is the poet of memory. In conversation, he would often seize on some exemplary moment in his own experience. And what is striking about The Birthday Party is how often the characters dwell on time past or escape into a vanished world, whether real or imagined. Stanley, who has ended up playing piano on a seaside pier, harks back to an evening when he gave a concert in Lower Edmonton: intriguingly, the very place where the schoolboy Pinter himself enjoyed great success on the running track. Goldberg, concealing his menace under a mask of affability, is filled with memories of golden days. Even in the party scene, that turns so ugly, the infantile Meg and the brutal McCann lapse jointly into a drunken nostalgia. While Meg is cocooned in a childhood world, McCann retreats into a Celtic romanticism and even sings a ballad starting ‘Oh, the Garden of Eden has vanished, they say, But I know the lie of it still’.

If lost Edens constantly recur in Pinter's work, it is partly because the present contains such terrors. In a letter to the play's first director, Peter Wood, Pinter was unusually explicit about what he was up to: Stanley, he said, was fighting for his life against forces ‘compounded of the shit-stained strictures of centuries of  “tradition”’. That is a major key to the play. The young Pinter had already risked imprisonment by registering as a conscientious objector when summoned to do military service. Goldberg and McCann, for Pinter, also embody the repressive aspects of the social, religious and political system. Pinter detested any form of anti-Semitism and had a profound love of Ireland; yet he makes Goldberg and McCann the visible symbols of an established order that demands total submission.

Some say that the mature Pinter, in claiming The Birthday Party as a political play, was being a trifle disingenuous. But I would argue that the evidence was always there. One of the charges levelled against Stanley in the interrogation scene is that ‘You betrayed the organisation’. Goldberg and McCann are not simply manipulative monsters; they are themselves sweatily subservient to an invisible hierarchy. And, as anyone with a sense of history knows, the knock on the door in the middle of the night has long been a feature of European life. You only have to look at Pinter's text to see the point. Stanley, however battered and bruised, emits terrifying, inarticulate noises as he is led away by his captors. As he is carried out, Meg's husband, Petey, cries ‘Stan, don't let them tell you what to do’. In a New York interview in 1988, Pinter described that ‘as one of the most important lines I've ever written’. If The Birthday Party survives, it is not simply because it chills, surprises and entertains. It is also because it contains the seeds of the obstinate defiance that was to become Pinter's defining quality as both a dramatist and a citizen.