An introduction to Una Marson's poetry

Una Marson – poet, playwright, editor, activist and broadcaster – published four collections of poetry between 1930 and 1945 while based in Jamaica and London. Dr Deirdre Osborne introduces major themes and concerns in Marson’s poetry, looking in particular at ‘The Poet’s Heart’ and ‘Little Brown Girl’.

Una Marson – poet, playwright, editor, activist and broadcaster – is a major figure in 20th-century history, known in particular for her role in the interwar feminist and anti-colonial movements. Between 1930 and 1945, while living and working between Jamaica and London, she published four collections of poetry: the self-financed Tropic Reveries (1930), Heights and Depths (1931), The Moth and the Stars (1937) and Towards the Stars (1945). Marson’s poems can be broadly clustered: by geopolitical location (London or Jamaica, anti-colonial politics, Black feminism), by poetic genre (modernist, romantic, nature, love, blues, pastoral), and through reading them in comparative contexts of national literary traditions and the English literary canon. 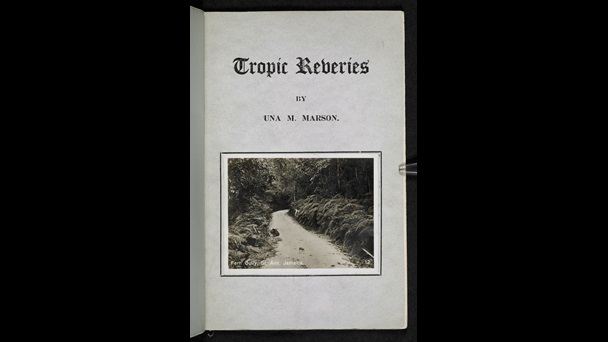 Responding to the literary canon

Marson’s poetry responds to the Western literary canon she has inherited, while also questioning the way in which the canon excludes particular voices based on their race, gender and/or class. Driven by this, Marson’s writing creates emancipatory poetic landscapes.

Drawn to the transcendent pitch and depth of feeling represented by the Romantic poets, Marson’s work challenges the dehumanising of Black people in colonial legacies. ‘The Poet’s Heart’ reconfigures William Wordsworth’s conceits of deep feeling and the sublimation of nature’s beauty. Marson provides both commentary on this inheritance, and satirically muses on what catalyses the poetic imagination, as set apart from ordinary life:

What some will pass and scarce admire
Just sets the poet’s soul afire;
In praise of it he ne’er can tire,
In rapture he is lost. (Tropic Reveries)

Marson employs an irregular Violette form of six quatrains, of rhyming tetrameter and enjambment into a trimeter that disconcerts the familiarity of the rhyme: AAAB, CCCD, EEEF, GGGH, IIIJ, KKKL. When contoured by Jamaica’s history in relation to nature, Marson’s references to the ‘soul’ and how a ‘poet’s heart […] By words of comfort oft he frees / The weary burdened heart’, gives pause for reflection on an environment marked with plantations, forever changed by colonial violence and yet, ‘Still sings of hope’ that to the speaker, ‘brings richest showers / Of blessings unto me.’ 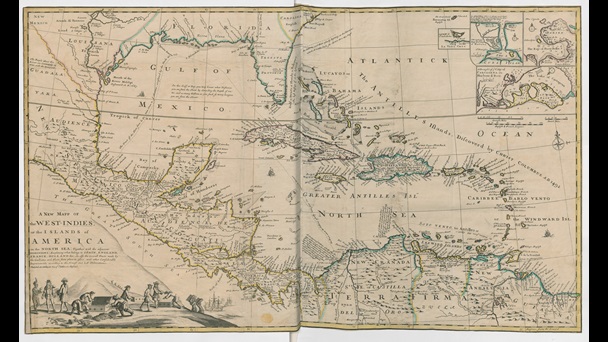 This 18th-century map displays the colonisation of Jamaica and the Caribbean, using coloured lines to highlight the areas controlled by Spain, England, France and Holland.

In her metropolitan poems, Marson explores women’s mobility in the modernist city. They connect her to other international women of the period such as Jessie Fauset, Josephine Baker and Djuna Barnes. ‘Little Brown Girl’ captures the racially conscious voice in which she wrote in an unforgettable evocation of walking in 1930s London streets, where there is never any possibility of anonymity or invisibility for a ‘brown girl’:

Little brown girl
Don’t you feel very strange
To be so often alone
In a crowd of whites?
Do you remember you are brown
Or do you forget?
Or do the people staring at you
Remind you of your colour? (Towards the Stars)

The characteristic enjambment Marson employs in the majority of her poems, here sweeps the reader onto the all-important rhetorical question. It serves to emphasise the experience of being ‘read’ by a racist gaze – literally in the poem and on the page as a text written by a Black female poet. Marson therefore presents a double challenge to readers’ expectations, in both a textual and meta-textual sense. The technique of argumentum ad ignōrantiam (based upon the ignorance of one’s opponent – for this is what the antagonistic, racist, questioning observer evokes) is a technique later used by Scottish Makar, Jackie Kay in ‘Do You Think I’m a Mule?’ (1985) and ‘In My Country’ (1993).

In opposition to the liberty experienced by the white male poets of the city, such as William Blake, Charles Baudelaire and T S Eliot (Marson’s contemporary at BBC radio), Marson’s poetic speakers convey the dangers of being looked at, haunted by the backstory of the Black body as a commodity in white economic history. 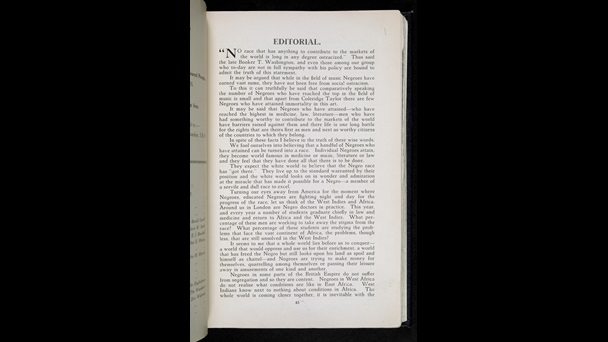 In the 1930s Una Marson edited The Keys, a journal which became a crucial voice for the Pan-African and anti-colonial movements of the time. Shown here is a page from one of her editorials.

Usage terms 'Quo Vadis?' photograph: © Topical Press Agency / Getty. Una M Marson: We have been unable to locate the copyright holder for Una M Marson. Please contact copyright@bl.uk with any information you have regarding this item. League of Coloured Peoples: Public Domain. You may not use the material for commercial purposes. Please credit the copyright holder when reusing this work.

Marson’s war poetry offers a unique and authentic perspective, written as a Black female, British subject, and Jamaican nationalist, domiciled in London, the imperial heartland. However, Marson’s personae are frequently ambiguously gendered. Through this playfulness regarding what the reader might assume (a male authoritative speaker), and as a female poet, she voices the veiled possibilities of same-sex relationships (‘To Connie’ and ‘Love Songs’, The Moth and the Star and ‘Paris and London’, Una Marson: Selected Poems). These poems anticipate Patience Agbabi’s and Dorothea Smartt’s work this century.

Elsewhere, Marson represents the realities faced by those within interracial relationships and families (‘Jamaica’ and ‘Another Mould’ in Heights and Depths, and ‘Brown Baby Blues’, The Moth and the Star). Her poems of maternal responsibility engage readers with the pain of Black children ostracised by white peers, and of their mothers who must protect, raise and endow them with self-worth in such environments that deracinate and oppress Black identity (‘Little Boys’ and ‘Cinema Eyes’, The Moth and the Star).