The Bloody Chamber is a collection of modern fairy tales, many of which incorporate elements of Gothic literature. Greg Buzwell traces the Gothic influence on Carter's stories, from the Marquis de Sade to Edgar Allan Poe.

Like every great author of Gothic fiction, Angela Carter was blessed with an intensely vivid and extremely dark imagination. Gothic imagery permeates all of her work but nowhere more so than in The Bloody Chamber (1979), a collection of tales that delights in moonlit forests, graveyards, isolated castles, locked rooms, guttering candles and the howling of wolves in the night. The stories in The Bloody Chamber primarily have their origins in fairy tales, but Carter gave these old and much-loved narratives a radical twist, providing a feminist perspective to stories in which the female characters were young, demure and helpless or else old, haggard and witch-like. As Carter commented in her essay ‘Notes from the Front Line’, ‘I am all for putting new wine in old bottles, especially if the pressure of the new wine makes the old bottles explode’. Carter also took inspiration from Gothic literature’s rich heritage, adapting themes and motifs from classic tales of terror and giving them her own uniquely individual slant.

One of the most important influences on Angela Carter’s work was the American author Edgar Allan Poe (1809-1849). Carter’s afterword to her first collection of short stories Fireworks (1974) includes the observation: ‘I'd always been fond of Poe and [Ernst] Hoffmann – Gothic tales, cruel tales, tales of wonder, tales of terror, fabulous narratives that deal directly with the imagery of the unconscious – mirrors; the externalized self; forsaken castles; haunted forests; forbidden sexual objects’. Poe himself even features as a character in one of her short stories – ‘The Cabinet of Edgar Allan Poe’ – included in the collection Black Venus (1985). The tale visualises Poe’s imagination being shaped by his troubled childhood and in particular by the hours he spent watching his mother acting on the stage, playing roles in which she died, often violently, night after night only to return to life when the curtain came down and the lights went up. The story doesn’t attempt to explain Poe’s talent, but it does offer a suggestion as to why his imagination so frequently embraced the grotesque and bizarre:

Now and then, as a great treat, if he kept quiet as a mouse, because he begged and pleaded so, he was allowed to stay in the wings and watch; the round-eyed baby saw that Ophelia could, if necessary, die twice nightly. All her burials were premature.

It is easy to imagine how a story such as Poe’s ‘The Oval Portrait’ (1842), in which a male artist’s painting of his female model becomes increasingly lifelike as the model herself fades towards death, could have been an influence on The Bloody Chamber, a collection of tales in which any woman who remains passive under the male gaze invariably finds herself in peril. In a similar fashion Carter’s ‘The Loves of Lady Purple’, published in Fireworks, in which a male puppet-master grows frail while his female puppet becomes ever more animated plays out the artist/subject relationship of ‘The Oval Portrait’ in reverse. Another example of Poe’s influence on Carter’s work can be found in her novel Love (1971), which includes a psychologically unstable woman, Annabel, and her husband Lee, an echo of Poe’s poem ‘Annabel Lee’ which deals with that most morbidly Gothic of all themes – the beautiful but fragile woman, doomed to die young. 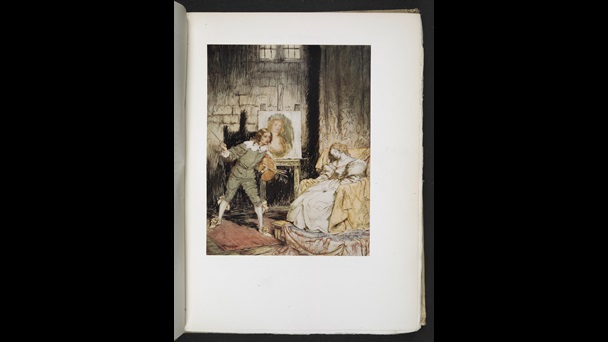 'The Oval Portrait' by Edgar Allan Poe, illustrated by Arthur Rackham and published in Tales of Mystery & Imagination, 1935. 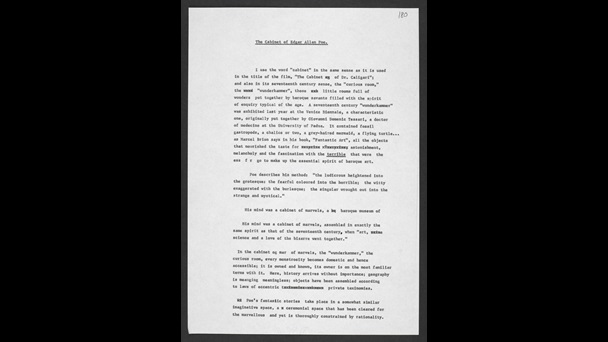 'His mind was a cabinet of marvels': from a draft essay by Angela Carter on Edgar Allan Poe and his short story, ‘The Fall of the House of Usher’.

The main inspiration for the stories in The Bloody Chamber, however, comes from the French author Charles Perrault (1628-1703) and his versions of tales such as ‘Little Red Riding Hood’, ‘Puss in Boots’ and ‘Bluebeard’, along with Beauty and the Beast by Gabrielle-Suzanne Barbot de Villeneuve (c. 1695-1755). Many of these tales had their origins in folklore and myth. Fairy tales and Gothic are closely entwined and a fairy tale’s basis in folklore provides a traditional framework upon which modern fears can be explored. Just as Bram Stoker had taken East European folk tales about vampirism and used them in Dracula (1897) to highlight the anxieties that assailed the Victorian fin de siècle, so did Carter take the fairy tales of the 18th and 19th centuries and use them as a framework to address modern issues. In particular, Carter utilised fairy tales as a basis from which to explore contemporary attitudes towards sex and gender in what was still largely a patriarchal society.

Angela Carter's translation of The Fairy Tales of Charles Perrault 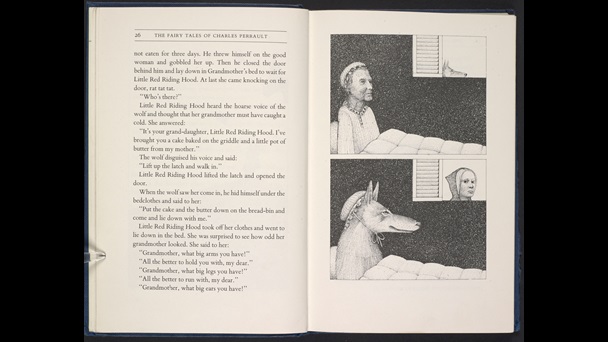 In 1977, two years before The Bloody Chamber was published, Angela Carter published a book of fairy tales by Charles Perrault that she translated from the original French.

Usage terms Charles Perrault: This material is in the Public Domain. Angela Carter: © Displayed with the permission of the Estate of Angela Carter c/o Rogers, Coleridge & White Ltd., 20 Powis Mews, London W11 1JN. Angela Carter’s work is published in the UK by Vintage, Virago, Penguin Classics. You may not reuse the material for commercial purposes. Martin Ware: © Estate of Martin Ware. Published under a Creative Commons Non-Commercial Licence.

Angela Carter also took inspiration for The Bloody Chamber, perhaps surprisingly, from the work of the Marquis de Sade (1740-1814), and especially his novels Justine (1791) and Juliette (1797). In the former, a virtuous woman is continually taken advantage of by men and ultimately dies in despair, while in the latter an amoral nymphomaniac achieves considerable influence, success and happiness by exploiting her sexuality. From de Sade’s sexual fantasies Carter noted the lesson that passivity in a heroine was not merely undesirable, it was also likely to result in her death. Spirited women meanwhile might well be able to turn the tables on their lascivious admirers and beat them at their own game. Carter explored these ideas much further in The Sadeian Woman and the Ideology of Pornography, published, like The Bloody Chamber, in 1979. The Sadeian Woman met with criticism from feminists, unsurprisingly given the sexually exploitative nature of de Sade’s work, and Carter’s refusal to vilify him; and yet the very same conclusions Carter reached when presented as variations on fairy tales in The Bloody Chamber achieved both popularity and critical acclaim – an example of how Gothic fiction can explore unpalatable subjects and challenging ideas in a fashion that people are willing to accept.

Typescript draft of The Sadeian Woman by Angela Carter 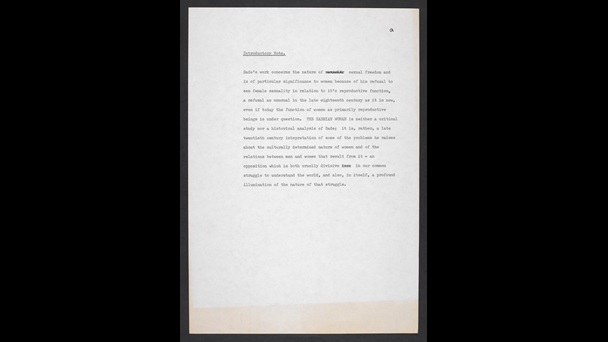 Angela Carter composed The Bloody Chamber and Other Stories during the same period as she worked on The Sadeian Woman, a long essay examining pornography, power and sexuality through the work of the 18th century French aristocrat, the Marquis de Sade.

‘The Bloody Chamber’: fairy-tale Gothic for a new age

‘The Bloody Chamber’ is based on Charles Perrault’s fairy tale ‘Barbe Bleue’ (‘Bluebeard’, in English), the story of a French nobleman who murders his successive wives and keeps their bodies in a locked room within his castle. Carter called her variation on this story ‘The Bloody Chamber’, a title laden with significance. In Perrault’s tale, a ‘bloody chamber’ could indicate the blood-spattered room in which Bluebeard keeps the corpses of his butchered brides. Alternatively, the bloody chamber could be a reference to the womb – seat of life, but also a frequent source of death. And when viewed from the present day, and in the light of Carter’s version of the tale, the bloody chamber could refer to the marital bedroom and the sadomasochistic sexual desires of the heroine’s husband, named in Carter’s version ‘the Marquis’, which inevitably puts the reader in mind of the Marquis de Sade. Sex in ’The Bloody Chamber’ is, after all, often couched in terms of exploitation, violence and murder. At one point the heroine, never named, watches her reflection in a dozen mirrors as her husband takes her virginity:

A dozen husbands impaled a dozen brides while the mewing gulls swung on invisible trapezes in the empty air outside.

The link between the marital bedroom, death and her husband’s murderous intentions are made explicit a few lines later:

My husband, who, with so much love, filled my bedroom with lilies until it looked like an embalming parlour.

Manuscript notes and drafts of The Bloody Chamber by Angela Carter 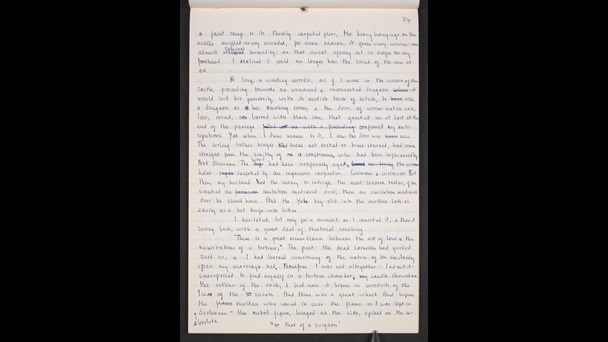 'A long, a winding corridor, as if I were in the viscera of the castle, proceeding towards an unnamed & unconverted dungeon': Angela Carter heightens the Gothic setting and atmosphere as the heroine of 'The Bloody Chamber' approaches the locked chamber. From an undated manuscript draft of the short story.

The story also makes use of quintessentially Gothic settings and props. The castle to which the Marquis takes his virginal bride, for example, is isolated and mysterious, like something straight from a tale by Ann Radcliffe or Edgar Allan Poe:

The faery solitude of the place; with its turrets of misty blue, its courtyard, its spiked gate, his castle that lay on the very bosom of the sea with seabirds moving about its attics … cut off by the tide from land for half a day…

Another quintessentially Gothic touch lies in the way a threat to the heroine is foreshadowed by something seemingly innocent, such as the jewellery worn by the young bride: ‘His wedding gift, clasped round my throat. A choker of rubies, two-inches wide, like an extraordinarily precious slit throat’.

Having set the scene with the trappings of a dark Gothic fairy tale, Carter defies our expectations by ensuring the nameless heroine of the story is not simply going to wait for rescue. Carter’s women are much more dynamic and resourceful. In the original story of ‘Bluebeard’ the last in the succession of brides survives when her brothers rescue her. In ‘The Bloody Chamber’ salvation comes not in the form of dashing brothers, and nor does it come in the form of a heroic father or a handsome prince. Here, salvation comes in the shape of the heroine’s mother, riding to the rescue and toting a pistol. The story concludes with the final triumph of dynamic matriarchy over the traditional patriarchy of the fairy tale. It is quite fitting, perhaps, that in this modern variation on the fairy tale the sexually aggressive and murderous Marquis should meet his end at the hands of his own mother-in-law. Between Perrault’s 17th-century fairy tale and Angela Carter’s late 20th century variation the men have found themselves out-manoeuvred, and the stereotypes of dominant male, fey heroine and rescuing prince have all been overturned.