Two of the Great War’s most powerful and vividly rendered poems have surprisingly literary titles: ‘Anthem for Doomed Youth’ and ‘Dulce et Decorum Est’. Dreamy, bookish and slight, their author, Wilfred Owen, was one of the great lyric witnesses of the action at the front, although his background might not seem to have prepared him to record brutal military catastrophes. For from his school-days onward, Owen had been obsessed by the Romantic poetry – and what he considered the equally Romantic life – of John Keats. Viewing Keats’s manuscripts on a visit to the British Museum in 1911, he observed with satisfaction that ‘his writing is rather large and slopes like mine’ while in an early sonnet, ‘On Seeing a Lock of Keats’s Hair’, he exclaimed ‘It is a lock of Adonais’s hair!’ Indeed, as he confessed to his mother, after a pilgrimage to Keats’s lodging at Teignmouth he was ‘melancholy-happy’ because ‘to be in love with a youth and a dead-un is perhaps sillier than with a real, live maid’. History, however, forced Owen to produce radical revisions of Keats’s themes.

Collection of manuscript poems by John Keats, including the Odes and 'To Autumn' 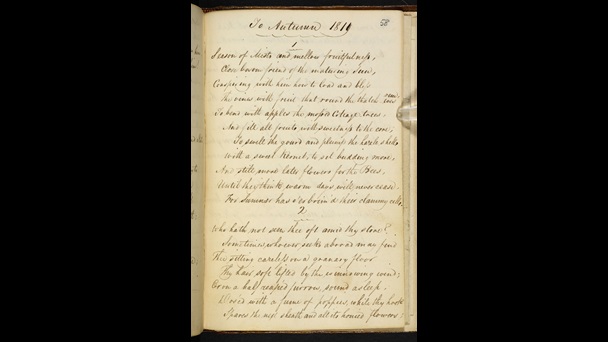 Manuscript of ‘To Autumn’ by John Keats, 1820. In 1911 Wilfred Owen viewed this manuscript of Keats’ poems at the British Museum.

Keats, of course, was one of England’s most brilliant poets of the pastoral. Over and over again, particularly in such famous works as ‘Ode to a Nightingale’ and ‘To Autumn’, he celebrated the redemptive cycles of nature – the eternal song of the nightingale that was not ‘born for death’, the ‘stubble-plains’ of autumn ‘with rosy hue’. But when his 20th-century acolyte, Owen, found himself in the devastated landscapes that the supposed ‘war to end all wars’ had wrought, such pastoral visions were no longer possible. The once fertile fields at the front had become cities of death, or, as Owen himself put it, ‘an infernal cemetery’ filled with ‘smashed bodies and human remains’, a gigantic charnel house. Hence both ‘Anthem for Doomed Youth’ and ‘Dulce et Decorum Est’ bitterly subvert the aesthetic tradition to which their titles allude. At the same time, though, both are marked by a formal elegance and eloquence that aligns them with precisely the tradition they rail against.

The somewhat elevated phrase ‘Anthem for Doomed Youth’ was actually bestowed on the poem by Owen’s fellow combatant-artist Siegfried Sassoon, whom he met while both were recuperating from shell shock at Craiglockhart, an army hospital, and the piece itself is a sonnet that barely deviates from received patterning. Within its intricate structure, however, the poem violently rejects any impulse towards elegiac sentimentality, lamenting instead the unprecedented brutality of the war whose victims the poet wants to memorialise. ‘What passing-bells for these who die as cattle?’ [emphasis added] Owen asks abruptly, and follows the shock of this opening question with a catalogue of the technological horrors that the ‘doomed youth’ of Europe so infamously encountered at the front: ‘the monstrous anger of the guns’, the ‘stuttering rifles’ rapid rattle’, the ‘shrill, demented choirs of wailing shells’. In the opening octave of his sonnet, he revises the imagery of conventional religious mourning (‘passing-bells’, prayers, choirs) to suggest that just as the war has replaced the lyrical fields of pastoral vision with ‘an infernal cemetery’, it has also shattered the consolatory hopes of Christian theology.

The poem’s concluding sestet is quieter, less brutal, but no less sceptical. No ‘candles may be held,’ Owen comments, ‘to speed’ the dead towards a just reward. And even if ‘the holy glimmers of good-byes’ shine in the soldiers’ dying eyes, their only funeral ‘pall’ shall be (punningly) the sorrowful ‘pallor of girls’ brows’, their only ceremonial flowers ‘the tenderness of patient minds’ waiting, no doubt, for bad news, while each ‘slow dusk’ will be marked by an ambiguous ‘drawing-down of blinds’ – shades closed against the dark, or perhaps blinders, suggesting the refusal of those at home to understand the fate of those who ‘die as cattle’. 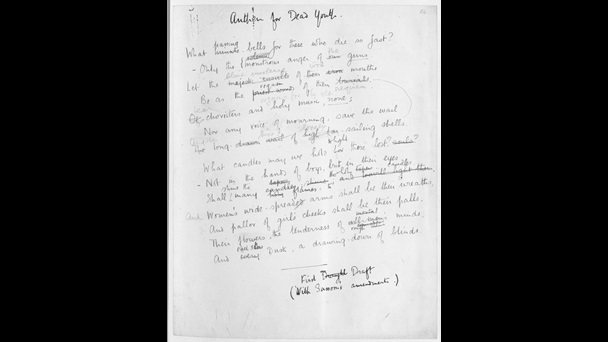 If, in ‘Anthem for Doomed Youth’, Owen is engaged in a struggle with his own admiration for Keatsian Romantic tradition, in ‘Dulce et Decorum Est’, one of his most savagely reportorial works, he extends his quarrel with tradition to an assault on the Roman poet Horace and on ‘a certain poetess’, the contemporary British writer Jessie Pope. In a classical ode studied by countless British school boys and often quoted by those exhorting young combatants to be brave, Horace had declared that ‘it is sweet and proper’ (‘Dulce et decorum est’) to die for one’s country (‘Pro patria mori’). Similarly, in a popular, jingoistic verse Jessie Pope had patronisingly urged young men to join the troops: ‘Who’s for the trench – / Are you, my laddie?’ she asked, scorning anyone ‘who wants to save his skin’ or ‘stand and bite his thumbs’. Even Owen himself had once, perhaps ambivalently, claimed that there is no ‘greater love’ than laying down one’s life for a friend. But in ‘Dulce and Decorum Est’, describing the horror of a gas attack, he passionately disputes the traditional concept of patriotic self-sacrifice while recording in terrifying detail the ravaged landscape of war through which ‘doomed youth’, prematurely aged, trudge ‘Bent double, like old beggars under sacks, / Knock-kneed, coughing like hags’. 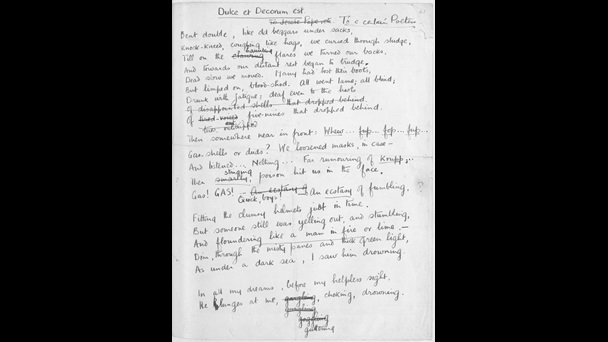 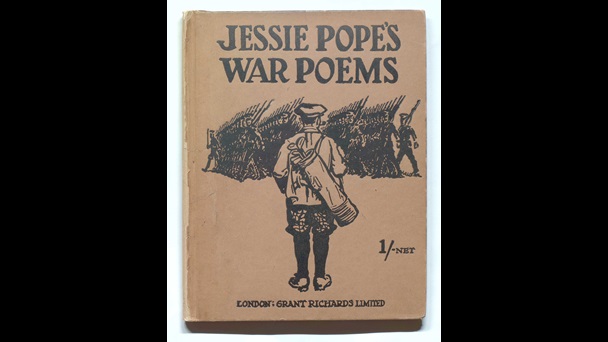 Central to the memory of the sudden gas attack that triggers the poem is Owen’s scrupulously intense description of one nightmarishly unlucky man, who failed to put on his protective helmet in the ‘ecstasy of fumbling’ that saved his mates. With photographic exactitude, the image of this ill-fated comrade is imprinted in the poet’s consciousness, seen through ‘the misty panes’ of his own helmet. ‘In all my dreams, before my helpless sight, / He plunges at me, guttering, choking, drowning’. And thus, in a rage of compassion, Owen attacks not only ‘a certain poetess’ – Jessie Pope – to whom he dedicates the piece, but all those, from Horace on, who would glamorise warfare.

If in some smothering dreams you too could pace
Behind the wagon that we flung him in,
And watch the white eyes writhing in his face . . .
My friend, you would not tell with such high zest
To children ardent for some desperate glory,
The old Lie: Dulce et decorum est
Pro patria mori.

Yet even while Owen testifies so fervently to the scenes that put in question some of the highest themes of literary tradition, he brilliantly demonstrates his skill at versification: ‘Dulce et Decorum est’ links together two Petrarchan sonnets with Keatsian invention, cementing the writer’s alliance with some of the techniques of the tradition against which he is rebelling. In particular, the last three lines, with their sardonic rhymes of ‘glory’ and ‘mori,’ emphasise his bitterness. ‘Pro patria mori’, the only trimeter line in a poem that is composed in resolute pentameter, ends the piece with a strangled snarl, as if only a shattering of received rhythms could match the unspeakable destruction that has doomed so many ardent young men to a ghastly ‘drawing-down of blinds’ – and blinders.