Antonin Artaud and the Theatre of Cruelty

The Theatre of Cruelty, developed by Antonin Artaud, aimed to shock audiences through gesture, image, sound and lighting. Natasha Tripney describes how Artaud's ideas took shape, and traces their influence on directors and writers such as Peter Brook, Samuel Beckett and Jean Genet.

One of the most influential theatre theorists of the 20th century and a key figure of the European avant garde, Antonin Artaud (1896–1948) developed the ideas behind the Theatre of Cruelty.

The Theatre of Cruelty is both a philosophy and a discipline. Artaud wanted to disrupt the relationship between audience and performer. The ‘cruelty’ in Artaud’s thesis was sensory, it exists in the work’s capacity to shock and confront the audience, to go beyond words and connect with the emotions: to wake up the nerves and the heart. He believed gesture and movement to be more powerful than text. Sound and lighting could also be used as tools of sensory disruption. The audience, he argued, should be placed at the centre of a piece of performance. Theatre should be an act of ‘organised anarchy'.

Antonin Artaud in The Passion of Joan of Arc 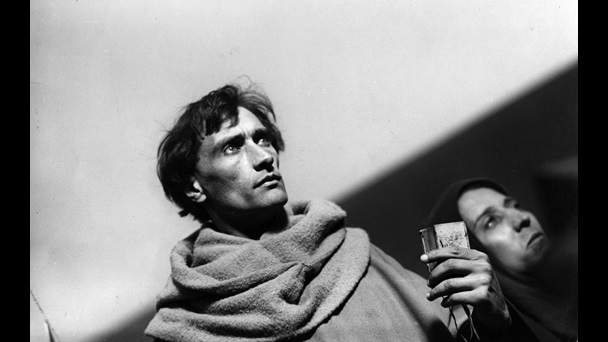 ‘A new theatrical language of totem and gesture’

It was a piece of Balinese theatre that Artaud saw at the Paris Colonial Exposition in 1931 that began to shape his ideas about gesture and performance. He was interested in the use of facial expressions and the relative unimportance of the spoken word. Gesture, he felt, could communicate an artist’s unconscious and conscious intentions in a way that words were incapable of expressing (though a writer himself, he believed that words could only do so much). Gesture could make these things visible on stage. ‘All true feeling is in reality untranslatable. To express it is to betray it. But to translate it is to dissimulate it… That is why an image, an allegory, a figure that masks what it would reveal have more significance for the spirit than the lucidities of speech and its analytics'.

Shortly afterwards he published his 'First Manifesto for a Theatre of Cruelty' in La Nouvelle Revue Française; it would later appear as a chapter in his seminal book The Theatre and Its Double. In it he described his intention to create ‘a new theatrical language of totem and gesture – a language of space devoid of dialogue that would appeal to all the senses'.

Images dominated Artaud’s theory of theatre. He described a ‘spectator seized by the theatre as by a whirlwind of higher forces’. He believed that many of the conventions of theatre, prescriptive play texts – ‘words’, he felt, ‘should have the importance they have in dreams’ – and proscenium arches, worked against what he saw as the magic of the form, the ritual of theatre. He believed in the abolition of the auditorium and the stage to create a single playing space with no barriers between audience and performers.

During his lifetime Artaud’s theories remained primarily theories but their influence has been considerable. While it can be argued that Artaud’s ideas are not always coherent or consistent, it’s fair to say that his theories have changed the course of contemporary theatre. His work had a profound impact on a generation of European writers including Jean Genet and Samuel Beckett. The director Peter Brook was a major advocate for Artaud’s ideas, expressed in his book The Empty Space. His productions of King Lear and the Marat/Sade were most explicitly influenced by Artaud’s thinking. His ideas bled beyond the world of the stage. Jim Morrison, lead singer of the 1960s American band the Doors, was inspired by his writings on ritual and spectacle in performance. John Cage, Merce Cunningham and The Living Theatre have all acknowledged a debt to Artaud.

Susan Sontag famously wrote that his impact was so great that ‘the course of all recent theatre in Western Europe and the Americas can be said to divide into two periods – before Artaud and after Artaud’.

Peter Brook was a director much influenced by Artaud’s theories. This is perhaps most overt in his landmark 1964 production of Peter Weiss’s play – the full title of which isThe Persecution and Assassination of Marat as Performed by the Inmates of the Asylum of Charenton under the Direction of the Marquis de Sade – for the Royal Shakespeare Company’s Theatre of Cruelty season. This production, according to critic Michael Coveney, effectively launched ‘the fringe and alternative theatre in this country, representing an intersection between European theory and new British radicalism.’ There were no props, the soundtrack was jagged and cacophonous, the stage was populated by lunatics and buckets of blood were spilled into the gutters. The effect was an overwhelming of the senses. 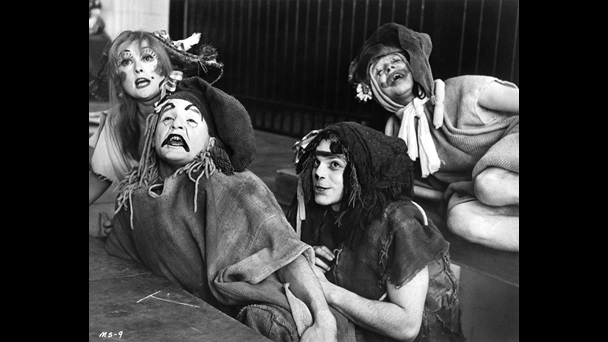 'Lunatics' on the set in Peter Brook's film version of Marat/Sade.

Often deemed unstageable, Artaud’s short play Jet of Blood, or Spurt of Blood as it is sometimes known, was written in 1925, but not performed in his lifetime. The text is sparse and the stage directions are surreal. Scenes of destruction abound. There is an earthquake, a giant hand – and a jet of blood. Scorpions crawl out of a woman’s vagina. Dead bodies are left strewn across the stage. It was first presented by the RSC as part of its Theatre of Cruelty season in 1964; a film version, The Spurt of Blood, by Albie Thomas, followed in 1965. A 2006 production at Theatreworks in Melbourne consisted of ‘a series of oneiric scenes sweep[ing] through the theatre to the accompaniment of a bruising soundtrack’, according to critic Alison Croggon. In her view, Artaud offers ‘a catalyst and a provocation, rather than a model’.

Joe Hill Gibbins’s production of Thomas Middleton and William Rowley’s The Changeling at the Young Vic employed Artaud’s methods to create his vision of a madhouse populated by grotesques. The characters jibber and dribble as Hill Gibbins revels in the ‘mess of the body'. Jelly and ice cream are splattered about with abandon, and the production ended in a disorientating looping, the same line repeated into a microphone until the words cease to have any meaning.

Artaud was born in Marseilles, France, in 1896. He contracted spinal meningitis as a young child and spent long stretches in sanatoriums during his youth. While he read widely during this time, he also developed a laudanum dependency that resulted in a lifelong dependence on opiates.

In 1920, he moved to Paris intending to pursue a career as a writer, but he became interested in the avant-garde theatre scene and began training and performing with directors, including Charles Dullin and Georges Pitoeff. He continued to write poetry and essays during this time.

He had a great interest in cinema and wrote the scenario for an early surrealist film by director Germaine Dulac, The Seashell and the Clergyman (1928). This film was an influence on surrealists Salvador Dalí and Luis Buñuel, who made the iconic Un Chien Andalou, with its infamous eyeball-slicing scene, in 1929.

Artaud appeared in over 20 films. He played Jean-Paul Marat in Abel Gance’s Napoleon (1927) and a monk in Carl Theodor Dreyer's The Passion of Joan of Arc (1928). Feeling shut-out, he co-founded the Alfred Jarry Theatre with Roger Vitrac and Robert Aron; during its brief period of operation was visited by a number of prominent artists, writers and thinkers, including Nobel-winning author André Gide.

An adaptation of Percy Bysshe Shelley's The Cenci premiered in 1935, with a set designed by Bauhaus, but it was a commercial failure, and most of the reviews were hostile or indifferent. Soon afterwards, Artaud travelled to Mexico, where he studied and lived for a period with the Tarahumaran people, experimenting with peyote.

After a strange and disastrous episode in which he travelled to Ireland and was deported in a straitjacket – he had acquired a cane that he believed holy and sought its creators, an episode ending in an altercation with the police – The Theatre and Its Double was published in 1938.

Already behaving erratically and increasingly fascinated with magic and astrology, Artaud spent much of the Second World War in asylums and psychiatric hospitals. Electroshock treatments were administered. During this period he began writing and drawing again. He wrote a study of Van Gogh and recorded Pour en Finir avec le Jugement de dieu (To Have Done With the Judgment of God) in 1947. Because of its political content and its cacophonous quality – including grunts and moans – a panel was assembled to discuss the merits of the piece. While they found in favour of it, it was never broadcast on French radio. In 1948, Artaud was diagnosed with cancer and he died shortly afterwards at the age of 51.