Cultural references in The Buddha of Suburbia

John Mullan considers Hanif Kureishi's The Buddha of Suburbia as a historical novel, and tracks its references to high and low culture.

‘Culture is ordinary’ said the critic Raymond Williams, and The Buddha of Suburbia seems to illustrate it. Hanif Kureishi's narrator, Karim Amir, fills his narrative of teenage misadventure with allusions to music, films and books. The brilliant cover of the paperback edition is a Peter Blake pop art collage, and mid-1970s pop culture is everywhere. Changing buses on the way to a party with the alluring Eva Kay, Karim stops off with his father at a pub in Beckenham. ‘Kevin Ayers, who had been with Soft Machine, was sitting on a stool whispering into a microphone' (ch 1). His father, who is contemplating adultery, is moodily oblivious. 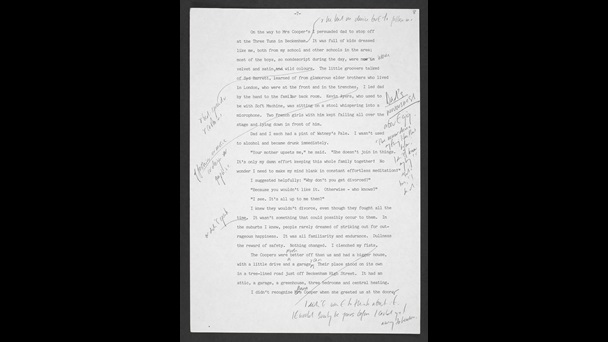 On their way to Eva Kay’s party Karim and his dad stop off at a pub where ‘little groovers’ hang out, wearing ‘velvet and satin, wild colours’, and Kevin Avers from Soft Machine is performing. The Three Tuns – a real pub in Beckenham – was frequented by David Bowie as a young man.

This is for a sense of period too. Karim has Marc Bolan posters on his wall, and favours the ‘tuneless’ musical meanderings of King Crimson and Captain Beefheart. Coasting the streets of Bromley in his pink Vauxhall Viva, the manager of his friend Charlie's band plays The Byrds' ‘Eight Miles High’ from thundering quadraphonic speakers. We are in a historical novel. Out on a Saturday night, the boys from his school are festooned in velvet and satin, ‘little groovers’ who ‘talked esoterically of Syd Barrett’ (ch. 1). The magnetic, uber-cool Charlie models himself on David Bowie:

He stood out from the rest of the mob with his silver hair and stacked shoes...It was Bowie’s influence, I knew. Bowie, then called David Jones, had attended our school several years before… (ch. 5)

Culture might be ordinary, but it takes application and know-how (otherwise what is the point?): ‘I had to study the Melody Maker and New Musical Express to keep up’ (ch. 1). 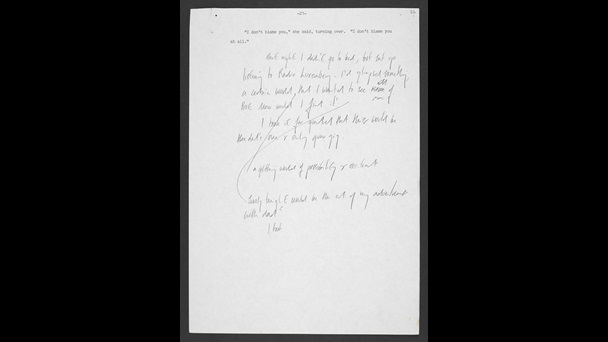 ‘That night I didn’t go to bed, but sat up listening to Radio Luxemberg. I’d glimpsed something, a certain world, that I wanted to see more of’: Karim stays up all night listening to music on the radio and yearns to escape his suburban life, after he experiences an epiphany at Eva Kay’s party. From the first typescript draft of The Buddha of Suburbia, 1987.

Sometimes there is real historical exactitude. Although Karim is blithely uninterested in the politics going on around him, the story that he tells ends in a Soho restaurant on the day of the 1979 general election: ‘Everyone in the place seemed to have been told I was going to be on television, and who was going to be the next prime minister. It was the latter that made them especially ecstatic’ (ch. 18). The novel registers the moment that Punk arrives, when we encounter mysteriously surly kids in ripped black clothes in a West Kensington pub – an ‘alien race dressed with an abandonment and originality we'd never imagined possible’ (ch. 9).

High culture is just as nonchalantly invoked as pop culture. Donne and Shelley are quoted without attribution. Setting off to meet a girlfriend, Karim is ‘determined to be suave and dismissive, a real Dick Diver,’ (ch. 3) as quick to assume familiarity with F Scott Fitzgerald's Tender is the Night as with the keyboard melody on the Doors' ‘Light My Fire’. Naturally, when his father's friend Anwar is forcing his daughter Jamila into an arranged marriage, Karim takes refuge from all the rows in a literary analogy: ‘I'd had enough of family dramas. If I wanted all that Ibsen stuff I could have stayed indoors’ (ch. 4). 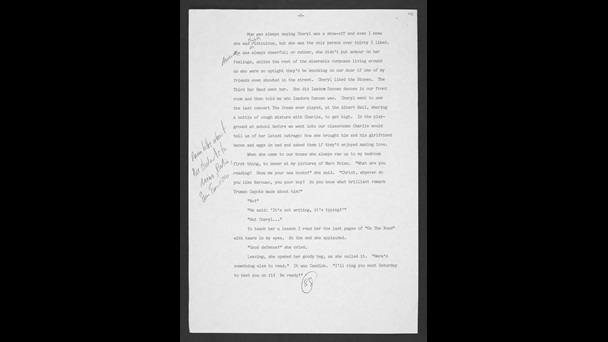 ‘“Here’s something else to read”’: after a discussion about 20th century American Beat writer Jack Kerouac, Eva Kay, here named Cheryl Cooper, casually gives Karim a copy of Candide, an 18th century satire by Voltaire, a philosopher of the French Enlightenment.

It is incongruous and yet comes easily to this narrator. He laughs at Charlie, who compensates for his failure as a pop singer by ostentatiously reading poetry on social occasions, ignoring the president of the Oxford Union in favour of a slim volume of verse: ‘The man's eyes popped in disbelief as Charlie imbibed a beakerful of the warm South’ (ch. 8). Karim, of course, has some elevated diction and an unglossed quote from Keats to hand. ‘I didn't want to be educated,’ (ch. 7) Karim protests, but books have got inside his head. Taught alongside girls for the first time – mocking, sexually experienced, middle-class girls – he gets in with ‘a bad bunch of women’ (ch. 7). ‘The ceremony of innocence was well drowned as far as they were concerned’ (ch. 7). Nice to be able so aptly to misuse that line from W B Yeats.

High and low keep meeting. Even Karim is surprised when, having migrated to west London, he encounters a local roadsweeper called Heater who has a penchant for Balzac (‘in translation’) and is always ready with ‘his bitter and big-mouthed opinion on the latest production of Lear or the Ring’ (ch. 11). Culture is for clashes. When Karim's aunt Jean and uncle Ted turn up at the house in Chislehurst, where his father is performing as a guru for a couple just back from trekking in India, they are ‘like characters from an Ealing Comedy walking into an Antonioni film’ (ch. 3). Karim's late-teen presumptuousness (he always expects you to get his references) is pitch perfect. In plenty of novels authors throw in cultural references in an effort to ‘place’ the fiction; here they belong to the narrator. 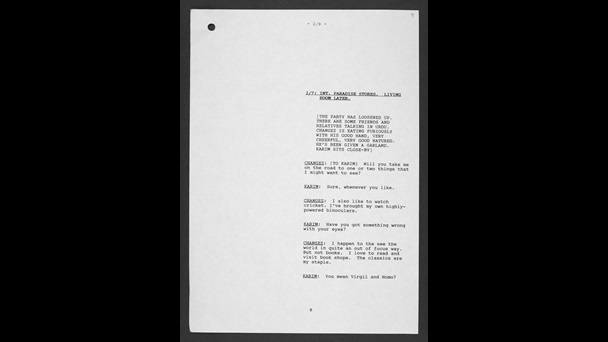 ‘The classics are my staple.’ ‘You mean Virgil and Homo [sic]?’ ‘No, no. […] P. G. Wodehouse and Conan Doyle for me. Also The Saint and Micky Spillane.’: Changez and Karim talk at cross-purposes about ‘the classics’.

Usage terms Hanif Kureishi: © Hanif Kureishi. You may not use the material for commercial purposes. Please credit the copyright holder when reusing this work.

Culture provides a reliable index of character. Seeing Jimmy, his mother's new lover, through the sitting-room window, Karim registers that he is ‘lower-middle class like us’  and ‘clever-looking’ (ch. 18); ‘the sort who'd know the names of all the actors in Vincent Minnelli films, and would go on television quizzes to prove it’ (ch. 18). The double allusion – to film history and TV culture – is characteristic. You should know just what he means.