Since its premiere at the Royal Court Theatre in 1982, Max Stafford-Clark has directed numerous productions of Top Girls, Caryl Churchill’s ground-breaking feminist play. The British Library talks with Stafford-Clark about the play’s political context and why he called it the ‘Best play I’ve ever directed’.

Top Girls premiered in 1982. How was Caryl Churchill’s play a product of that time?

Top Girls appeared at the beginning of Mrs Thatcher’s term in office [Thatcher was elected as Prime Minister in 1979].

Mrs Thatcher being the first woman Prime Minister was seen as a triumph of feminism. Yet was it really a triumph if, in fact, she was [politically] to the right of Attila the Hun? How was she using the success of women? Top Girls questions success and explores its cost.

The generation of students now only have a vague idea of what Mrs Thatcher represented. My daughter is 28 and she knows something of who Mrs Thatcher was, but certainly not quite the visceral response that audiences had at the time to her.

How do the central characters of Marlene, Angie and Joyce reflect the political context of Thatcherism?

In a way, Marlene, in the first scene, is slightly misleading. She meets people from history who have been created by Caryl’s imagination: Pope Joan, characters from fiction, Dull Gret who is a character in Bruegel’s painting. They’re all women who have triumphed in one way or another over adversity, whereas Marlene is simply the newly appointed executive of an employment agency. Marlene is arrogating her achievements to the level of those women right from the beginning.

The play is called Top Girls but it could equally have been called Bottom Girls. That’s to say, the dilemma is that Angie is not going to be a ‘top girl’. She’s in special measures at school. Joyce is a cleaner; there aren’t many job opportunities in East Anglia. At the end of the play Angie comes downstairs having had a nightmare and, half-awake, says ‘Frightening! Frightening!’ Of course she’s literally referring to the dream that she’s just had, but she’s also referring to the decade ahead which is going to be frightening for people who aren’t top achievers – who aren’t ‘top girls’.

The play contrasts the journey of Marlene with the possible difficulty of any kind of journey at all for Angie and indeed for Joyce, who’s opted to stay behind and look after Marlene’s daughter. They don’t fit into Thatcher’s vision for what a successful person should look like. 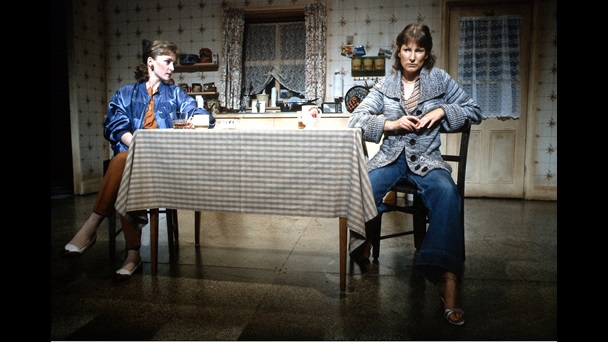 Lesley Manville as Marlene and Deborah Findlay as Joyce in the last act of Top Girls.

Given that Top Girls is a direct response to the early 1980s and Thatcherism, what was different about directing the revival in 2011, 30 years on from the original production?

In 1982 images of women in Vogue and magazines showed them with shoulder pads and bursting into a masculine world; this was celebrated. When I revived the play in 1991, models were now photographed holding babies. Motherhood was emphasised. While the play itself remained the same, the context had changed – and audiences responded differently, too.

In 2011, it was even more different. You’re looking back at the beginning of something. The play’s last word, ‘Frightening’, applied to the decade ahead and in a sense the gap between rich and poor. That gap has grown and is continuing to grow.

That’s really what Caryl is predicting. She’s predicting a time when the welfare state will be cut back and that is indeed what’s happened. As funding is cut from education and from the National Health Service, those that can afford private health care are going to live longer than those who have to wait at A&E for three hours. With a production now you look back and see how wise she was.

What first attracted you to stage and direct Top Girls?

I had a previous history with Caryl, both with Light Shining in Buckinghamshire and Cloud 9. I knew she was writing another play and I was very keen to be involved. My memory is slightly different from hers – it’s such a long time ago – but I recall that we went for a walk from the Royal Court into the Chelsea Physic Garden and she handed me some sheets which were in fact monologues. I was a bit daunted by the, as it were, non-dramatic nature of interaction. But what she did was intercut those monologues, so that became the first and rather extraordinary scene where Marlene is giving a dinner party in a restaurant with Pope Joan, Patient Griselda and Dull Gret as guests.

As often with Caryl’s work, I was attracted to the play but I didn’t know how to do it. That’s both daunting and challenging and exciting. Caryl pushes you as a director. 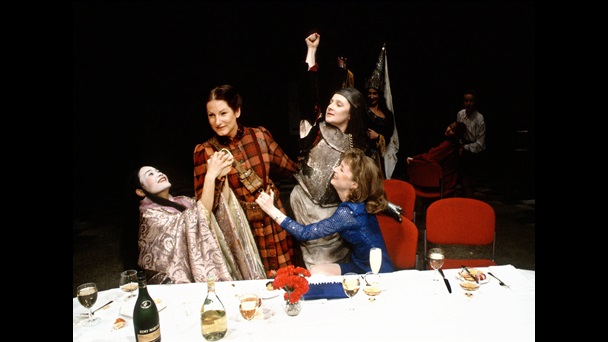 You’ve just touched upon how Top Girls was a challenging play to direct. Can you talk a little more about the play’s complexities?

Well, part of the difficulty is how the separate worlds of the play join up. It has a complex structure.

The published script is 94 pages long, and it’s only on page 79 that an audience learn that Angie is in fact Marlene’s daughter. So Caryl deliberately challenges and teases the audience by withholding exposition until the last minute. In a more conventional play, you would expect that Angie’s relationship with Marlene would be revealed much earlier. This disclosure leads to the argument between Joyce and Marlene about politics which is concentrated in the last ten minutes of the play, but is in fact central to it.

What’s worth remembering about Top Girls is that although it was a Royal Court success when we first put it on, it played to about 55% of the Royal Court – which is perfectly respectable – but it didn’t by any means get unanimously rave reviews or sell out all tickets.

In your production diary for 1982, you describe Top Girls as the ‘best play I’ve ever directed’. Why was that?

I think its boldness in structure makes it a remarkable play. Of course, I was also struck by its political pertinence. It was, and still is, a very important political comment.

And for Caryl’s well-known determination to emerge fresh from the starting gate of every play she does. It’s quite extraordinary and has sustained her career.

In England and throughout my working career, which now extends to 45 years, the theatre has been the forum in which political and social debate is held. I think that’s a great privilege and a great source of energy to all of us working in the theatre. 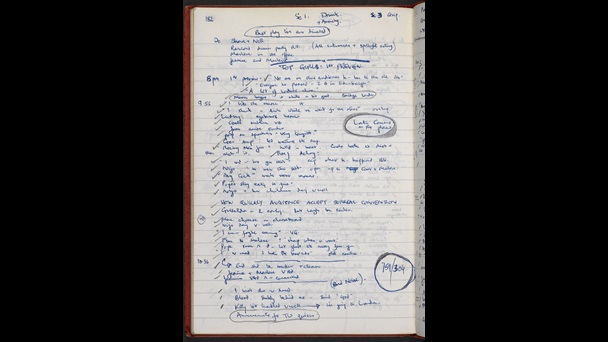 ‘Best play I’ve ever directed’: an entry from one of Max Stafford-Clark’s production diaries, written around the first preview of Top Girls.

Can you give us a flavour of what it was like to work as Artistic Director at the Royal Court in the 1980s?

Bill Gaskill, who I worked with on Joint Stock and who was my predecessor at the Royal Court, said to me early on, ‘Your first job is to ensure the survival of the theatre, Max’. That seems ridiculous now, when the Royal Court is once more being restored to the kind of third jewel in the Arts Council of England’s crown after the National [Theatre] and the RSC [Royal Shakespeare Company]. But we fought in that decade to preserve the life of the theatre. It was a decade when we were under siege, all right.

As well as being committed to commissioning new writing, what has defined your vision

I’ve never, neither at the Royal Court nor here [at Out of Joint], followed a particular political platform, but I think the plays I’ve chosen to do have what could be called a political sensibility. They poke into the corners of English life; lift up the stones and see the animals that scuttle underneath. They’re a response to English society.

Recently, for example, we did a play called This May Hurt A Bit by Stella Feehily which was about the encroaching privatisation of the National Health Service. So having a political sophistication, sensibility and outlook has been very important both for the plays I did at the Royal Court and I’ve carried that over, I hope, to Out of Joint.