A striking manifestation of the punk rock uprising’s social vitality was the upsurge in the production, distribution and consumption of fanzines across Ireland and the UK. Small-scale specialist music publications weren't in themselves new. Enthusiast zines, such as Brian Hogg’s 60s-centric Bam Balam, pre-dated the arrival of Sniffin’ Glue. And Other Rock 'n' Roll Habits (to give it its full title), produced by south London Punk fanzine pioneer Mark Perry in July 1976. But, to contain and explain UK punk’s shock of the new – and document the local scenes it engendered – took a multitude of cheaply made, often hand-written, invariably stencilled, Guerrilla-style publications.

Nationally, there was a pre-existing appetite for writing about music. In 1976 the UK mainstream already had five music papers published weekly. The establishment-owned weeklies would have a symbiotic relationship with the independently produced fanzines. As the zines that followed from Sniffin’ Glue (SG) sold in impressive numbers – at gigs, and on the counters of independent and chain store record stores – journals such as the NME and Sounds, were duty bound to document the new self-publishers in their own pages.

In this pre-Internet era it was also in these mainstream publications where more ambitiously minded zine editors could find addresses and contact numbers for the record stores that might stock their wares further afield. Many future mainstream music journalists came through the fanzine network. Danny Baker wrote for SG before becoming the NME’s star scribe of the late 1970s. Like music critics Adrian Thrills, Paul Morley and Jon Savage, I published my own fanzine (Alternative Ulster – AU) before making it onto the pages of NME. 1990s publishing magnate James Brown began his storied career printing Leeds-based zine Attack On Bzag and before BBC broadcaster Andrew Marr’s journalistic career took off he contributed a cartoon strip to a zine called Chainsaw. Future pop stars also published their own fanzines – Mike Scott of the Waterboys (Jungleland), Fatboy Slim/Norman Cook (Peroxide) Martin Fry of ABC (Modern Drugs), the Pogues’ Shane MacGowan (Bondage) and, prior to forming the Smiths, Morrissey contributed columns to both AU and Belfast’s Private World. 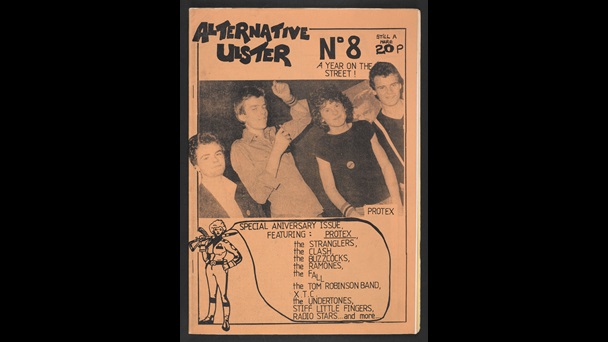 Usage terms © Gavin Martin. Except as otherwise permitted by your national copyright laws this material may not be copied or distributed further.

Punk’s DIY rallying cries and the fervent belief in self-expression it championed were key factors in the proliferation of fanzines. Xerox printing machines had become accessible to many, through one route or another, just as punk emerged. Almost anyone who cared to try to have a go and have their say could now, potentially, do so. Perry has said he approached the first edition of SG ‘like a school project’ but,as this former grammar school boy can bear witness, its influence was far greater than anything he could have achieved in a formal educational setting. ‘The notion that a magazine didn’t have to be saddle stitched and could just have a staple in one corner was the big idea that Mark Perry gave the world,’ remembers Lindsay Hutton, whose American punk-centred The Next Big Thing began printing in Grangemouth in 1977. Alongside cut-out newspaper ‘blackmail’ print, popularised by Sex Pistols’ designer Jamie Reid, SG’s handwritten headlines, manual typewriter texts and vernacular, irreverent prose set a stylistic template. Others tweaked or subverted it.

Early in SG’s 12-issue lifespan Perry was approached by Tony D at a Damned gig in London. Perry refused Tony's offer to write a review of the performance for SG and, instead, told him to start his own fanzine. In November 1976 Perry strengthened his line in SG5: ‘Don't be satisfied with what we write,’ he wrote, ‘... go and start your own fanzines’. That same month, back in his native Glasgow, Tony D produced the first issue of Ripped & Torn – one of the 50-plus fanzines writer David Laing suggests were published during the next two years.

With an ever disdaining popular press, radio and gig bans, not to mention violence against punks as a nationwide street thug pursuit, fanzines helped cohere the music’s sense of communality. ‘Everyone wanted to do something to help and join in, there was a vision or a spirit of enthusiasm,’ Martin Cass of Liverpool’s Bombsite zine recalls. When even the Sex Pistols’ recording career was (temporarily) curtailed with the end of their EMI contract in January 1977, a sense of punk under siege was palpable. The growth of fanzines throughout marked a fightback of sorts.

Perry called time on SG in June 1977 to pursue a thrilling career with his own band, Alternative TV. By that time, retaining its primitive presentation, upper left-hand corner stapled format, and eschewing the established magazine distribution network, SG was selling 15,000 copies per issue. Perry’s then girlfriend had printed the first issue at her place of work, but Rough Trade’s London base in Ladbroke Grove soon became fanzine central, the shop’s address published in several zines as a mail clearing house, while nearby company Better Badges printed many of them.

SG’s end did not mark the end of fanzines. Far from it – many felt it imperative to take up the challenge and continue where Perry had led. The fanzine scene would grow and mutate under the more directly politicised post-Crass, anarcho punk scene throughout the early 1980s.

Back in 1977 events spurred ever more into print. That summer the Pistols’ 'God Save the Queen' was banned. Aged 15, in the Loyalist stronghold of Bangor, Northern Ireland, while attempting to pogo to that historic release at the local, police-run (RUC - Royal Ulster Constabulary) disco, I received what was locally known as ‘a hiding’. A few months later, with the help of two school pals, we produced the first ever Alternative Ulster, which was numbered '7' (to create an air of mystique), had a 20 pence cover charge and 10 A4 pages stapled at the corner. Just like SG.

My father had offered to print AU at his place of work but, concerned that incautious generosity might create problems with his employers, I sought an alternative, independent enabler. The Buzzcocks in Manchester, whose 'Spiral Scratch' EP had been the first independently produced punk record, were the nearest, obvious target. A phone call to their New Hormones office secured an appropriately costed deal to print 50 copies of AU – duly delivered to my address in Bangor. 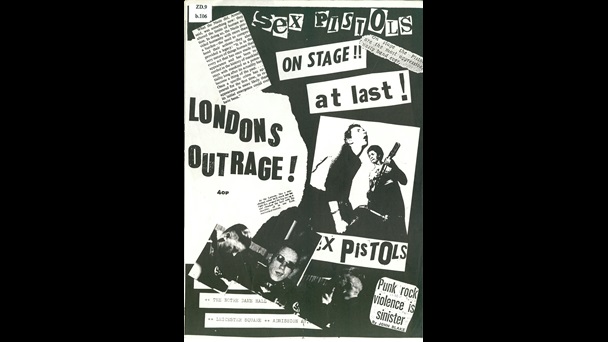 London’s Outrage was created by Jon Savage, who would go on the write the definitive history of punk, England’s Dreaming.

Usage terms © Jon Savage. Except as otherwise permitted by your national copyright laws this material may not be copied or distributed further.

John Lennon, of all people, had prefigured the fanzine era’s furtive pamphleteers and word bandits. As a Liverpool schoolboy in the 1950s he had produced one-off copies of the Daily Howl, a satirical journal comprising words and illustrations in a school jotter. But now duplication and willing outlets, like Terri Hooley’s celebrated Good Vibrations record shop (discovered on a nervy fanzine fact-finding trip to Belfast) meant zines such as AU could multiply.

Across the country a new playground ritual was enacted as others – Laughing Gravy, Complete Control, Positive Reaction – followed suit. Like Hooley’s shop, the upstairs, co-operative Just Books print outlet was run by 0960s activists – readily welcoming Northern Ireland's teenage punks and their fanzines. A cross-generational compact inherent in punk scenes elsewhere in these islands was joined.

Given superior printing and now stapled in the middle, the Just Books-produced AU was printing 1,500 copies per issue (and turning a small profit) when it ceased publication in 1980. After its first issue, the band Stiff Little Fingers (usually abbreviated to SLF) had offered to finance the release of their incipient punk anthem, its title taken directly from the fanzine, as a seven-inch cover mounted flexi-disc. The offer was turned down – retaining independence was key, and SLF’s new manager and co-lyricist Gordon Ogilvie was an English journalist employed as Belfast correspondent from one of the dreaded London-based tabloids. Years later I too would end up working for one of those same tabloids. But in the late 1970s such a prospect was unthinkable – fanzines gave voice to a generation outside the mainstream. That was, almost, the point – for several they were also a stepping stone to the future.

The Sex Pistols aside, punk rock’s mainstream commercial impact may have been minor but its cultural impact was deep and lasting. The fanzine culture that grew from the seed Perry planted shows just how deep and how lasting.