Looking at the original script for A Taste of Honey

That Joan Littlewood cut down the script of A Taste of Honey and added her own theatrical flavour is well-known. Louise Kimpton Nye takes a look at Shelagh Delaney’s original manuscript and explores some of its themes.

A Taste of Honey caused a storm when it was first staged in 1958. Its candid portrayal of working-class Salford life – with themes of interracial love, teenage pregnancy and theatre’s first serious gay character –shocked and delighted audiences and brought instant fame to the 19-year-old Shelagh Delaney. Never out of print and with many theatrical revivals and a film adaptation, the play had a profound and long-lasting impact on British popular culture, inspiring artists from the Beatles to Morrissey and blazing the trail for northern working-class drama from Coronation Street to Last Tango in Halifax. When it was included on the secondary school syllabus in the 1980s, new generations of young people came to identify with its central female character, Jo, and marvelled at the equally remarkable story of its young creator, Delaney.

Programme for A Taste of Honey at Wyndham's Theatre, 1959 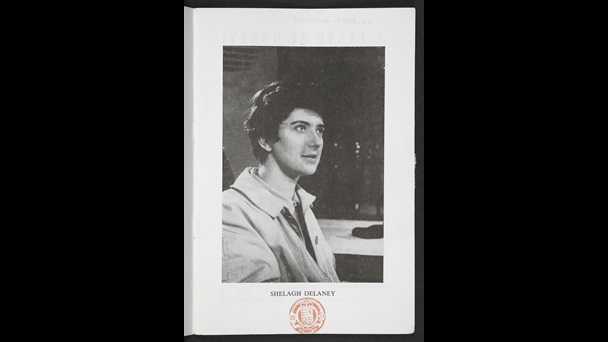 Shelagh Delaney’s A Taste of Honey premiered at Theatre Royal Stratford East in May 1958 and transferred to Wyndham’s Theatre in London’s West End in February 1959.

The story of how Shelagh Delaney sent her typescript to the radical theatre director Joan Littlewood, who then knocked it into shape, has become the stuff of theatre legend. Littlewood pruned the script, reorganised the action, introduced elements of music hall and comic routines and added a live jazz band. While it is widely agreed that these changes improved the play, all of its essential ingredients were there in Delaney’s original typescript – the keen dialogue with its Lancashire rhythms and cadences (and some brilliant one-liners), the bleak storyline and some of the most memorable characters in British theatre.

Photographs of A Taste of Honey 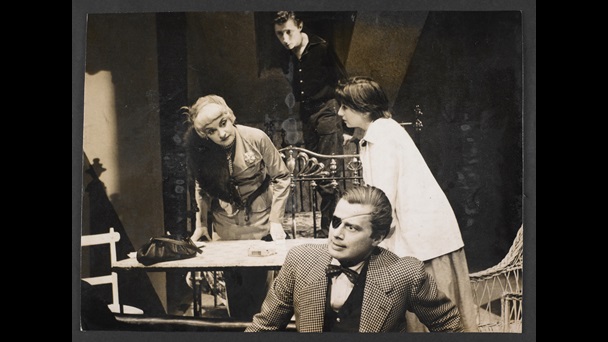 Theatre Workshop’s production of A Taste of Honey by Shelagh Delaney premiered at the Theatre Royal Stratford East, London, 1958, directed by Joan Littlewood.

Usage terms © Estate of J V Spinner (born in Walthamstow). Except as otherwise permitted by your national copyright laws this material may not be copied or distributed further.

The overwhelming consensus about A Taste of Honey is that it is about plucky working-class characters who remain optimistic in spite of their tragic life circumstances. This limited view, expressed by some theatre critics when the play was first staged – the hugely influential critic Kenneth Tynan praised the characters’ ‘zest for life’ and ‘indestructible’ Salfordian quality[1] – has prevailed in the six decades since.

Manuscript of A Taste of Honey by Shelagh Delaney The full manuscript of A Taste of Honey which Shelagh Delaney sent to Joan Littlewood, director of Theatre  Workshop, in March 1958.

Death and darkness in the original script

On reading Delaney’s typescript, what strikes the reader most is how much darker it is than the Theatre Workshop version. It is peppered throughout with references to death in all its forms – including suicide, infanticide and murder – and though some of these remain in the final text, there are far fewer than Delaney originally included and their effects are mitigated by the use of comic routines, shorter sequences of dialogue and lively music.

In Act 2, when Jo threatens to throw herself in the river, Geof’s reaction is a terse, ‘Stop pitying yourself’. The longer sequence in the original script has Jo reiterating her desire for death in response to Geof’s suggestion that her paintings will be valuable after she has died: ‘I’ll probably be much better off dead than I ever was alive’ (f. 40r).

In a remarkable juxtaposition of themes, Geof then asks, ‘Are you hungry? At the end of the week we don’t have much to eat. I did my best with the bits we had left over…’ Next, Geof recounts a memory of making a cake with tea leaves while at scout camp, hinting at the post-war food shortages endured by both characters (f. 40r).

What is startling in this scene is how Delaney combines themes of death, hunger and art. As Jo contemplates throwing herself in the ‘miserable’ river, the dying flower bulbs and her unsold paintings hint at unrealised talent and a stunted life. It is impossible to create art when you’re freezing and hungry.

The connection between hunger, starvation and death is made again by Helen in Act 2:

Haven’t you got yourself into a mess! … Half-starved – you look like death! What are you living on – fresh air and his sympathy? … I can see where you’ll finish up – in the bloody river or peddling your body on the streets… (f. 45r)

Here – and throughout the uncut script – the motif of the river, slimy and contaminated, serves as a reminder of where poor girls like Jo can end up.

In a later scene in Act 2 (ff. 57r–59r), a heavily pregnant Jo confides in Geof her desire for her baby’s death, and describes the numerous ways in which she claims to have tried to take her own life. References to suffocation, to tying a brick around the baby’s neck, to gassing herself in the oven, using pills or a carving knife culminate with Jo predicting a time ‘… when they drag my poor mutilated body from the river. Suicide while the balance of her mind was disturbed!’ (f. 59r).

Most of these references to violent death are cut from the reworked version of this scene in the final text, which condenses Jo’s emotions into one brief outburst: ‘I’ll bash its brains out. I’ll kill it. I don’t want this baby Geof. I don’t want to be a mother. I don’t want to be a woman’. In the end sequence of the original script, Jo again alludes to suicide when she tries to grab a knife as she goes into labour. Helen takes it from her, saying ‘spare me the blood and thunder [death scenes] … what were you trying to do to yourself?’ (f. 63r).

An intense study of death, of poverty and of the need for love, the original script has at its heart an overriding sense of fear. Fear not just of death, but of many things – of hunger, of sex and pregnancy, of prostitution, of madness and – most strikingly – fear of abandonment.

The origin of some of these themes can perhaps be traced to Delaney’s own background. She was born in 1938 in Salford where pollution, ill-health and high child mortality prevailed. War brought disruption, fear and privation to the young Shelagh, whose father was away at war for several years.[2] These conditions affected her health, and after the war, at the age of 11, she was sent to a children’s convalescent home near Blackpool which was run by a strict order of nuns – a period in her life which is recounted in her haunting memoir, Sweetly Sings the Donkey.[3]

The home brings new restrictions – a library full of books which are forbidden, no music and no radio. Food is hidden and becomes an obsession for the young Delaney: ‘I investigated the cellars … I found [they] are filled with food… sacks of spuds, turnips, carrots … flour bins and bread-bins’. Everyone is ‘ghostly pale and faded’ except a new young nun with whom there are visits to the beach. She calls the seaside in winter ‘lonely and quiet in a way I have never come across before’.

In her solitary room at the top of the house, awake and listening to the nuns walking up and down stairs and the sound of the sea below, she realises she is ‘frightened being here in this place and miles away from home but when I try to find a cause of being frightened I can’t and begin to think that it is not fear I feel at all but something else’. In A Taste of Honey, it is darkness that Jo fears – and its suggestion of loneliness or abandonment.

The theme of abandonment runs through A Taste of Honey. Jo’s tiny family unit – just her and her mother – is under pressure from the start of the play as Helen’s itinerant lifestyle and lack of care suggest she could leave at any moment. In the uncut script, the possibility of rescue for Jo and the reconstruction of the family unit exists in the form of a more caring version of Peter.

A potential father figure for Jo, Peter offers her a room of her own in his flash new house and, unhappy about leaving her alone at Christmas, gives her money before leaving with Helen (ff. 21r–23r). Later, he persuades Helen to ask Jo to come and live with them when the baby is born – and Helen even extends the invitation to Geof (f. 54r).

Connected to the theme of abandonment is the recurring motif of holding hands. In the section ff. 50r–54r, Jo asks Peter to hold her hand and says:

In the published script the character of Peter is transformed into an abusive staggering drunk, and, in an adapted version of the speech above, Jo asks Geof to hold her hand. When Jo reaches the point of ultimate fear and goes into labour near the end of the play, she asks Helen to ‘hold my hand’(f. 63r) as her desperate search for someone to love and care for her comes full circle.

As a brief look at Delaney’s typescript reveals, A Taste of Honey is not a simple story of cheery working-class people surviving against the odds in a hostile world. Cultural theorist Stuart Hall commented on Delaney’s ‘extraordinarily fine and subtle feel for personal relationships’, and called Jo a combination of ‘tough idealism and mature despair’ in a play which is infused with ‘a spirit of acceptance’.[4] Like most critics, he avoids using the word ‘tragic’, yet Jo’s situation has all the hallmarks of tragedy. This is all the more apparent in Delaney’s uncut script which is an altogether much darker and more intense study of human desperation than the final text.