Looking back at Empire: the background to Empire of the Sun

J G Ballard was born and raised in Shanghai, and spent the last two years of the Second World War interned in a civilian camp with his parents. He explains how these experiences inspired Empire of the Sun, and reflects on seeing his novel made into a film.

Memories have huge staying power, but like dreams, they thrive in the dark, surviving for decades in the deep waters of our minds like shipwrecks on the sea bed. Hauling them into the daylight can be risky. Within a few hours, a precious trophy of childhood or a first romance can crumble into rust.

I knew that something similar might happen when I began to write Empire of the Sun, a novel about my life as a boy in Shanghai during the Second World War, and in the civilian camp at Lunghua, where I was interned with my parents. Coming to England after the war, and trying to cope with its grey, unhappy people, I hoarded my memories of Shanghai, a city that soon seemed as remote and glamorous as ancient Rome. Its magic never faded, whereas I forgot Cambridge within five minutes of leaving that academic theme park, and never wanted to go back. The only people I remembered were the dissecting room cadavers.

During the 1960s, the Shanghai of my childhood seemed a portent of the media cities of the future, dominated by advertising and mass circulation newspapers and swept by unpredictable violence. But how could I raise this Titanic of memories? Brought up from the sea bed, the golden memory hoard could turn out to be dross. Besides, there are things that the novel can't easily handle. I could manage my changing relations with my parents, my 13-year-old's infatuation with the war, and the sudden irruption into our lives of American air power. But how do you convey the casual surrealism of war, the deep silence of abandoned villages and paddy fields, the strange normality of a dead Japanese soldier lying by the road like an unwanted piece of luggage?

Manuscript draft of Empire of the Sun by J G Ballard 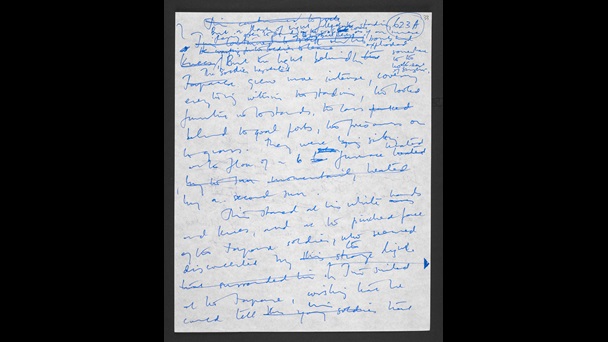 ‘a flash of light filled the stadium’: Jim describes witnessing the atomic bomb in Nagasaki from hundreds of miles away in the transit camp in Shanghai, in Chapter 31 from the autograph draft manuscript of Empire of the Sun, c. 1983.

Usage terms Manuscript draft of Empire of the Sun, by J. G. Ballard © J. G. Ballard. Reproduced by permission of the J. G. Ballard Estate. All rights reserved. You may not use this work for commercial purposes and the copyright holder must be credited.

I waited 40 years before giving it a go, one of the longest periods a professional writer has put off describing the most formative events in his life. Twenty years to forget, and then 20 years to remember. There was always the possibility that my memories of the war concealed a deeper stratum of unease that I preferred not to face. But at least my three children had grown up, and as I wrote the book I would never have to think of them sharing the war with my younger self.

In fact, I found it difficult to begin the novel, until it occurred to me to drop my parents from the story. We had lived together in a small room for nearly three years, eating our boiled rice and sweet potatoes from the same card table, sleeping within an arm's reach of each other, an exhilarating experience for me after the formality of our pre-war home, where my parents were busy with their expat social life and I was brought up by Chinese servants who never looked at me and never spoke to me.

But I needed to move my parents out of the story, just as they had moved out of my life in Lunghua even though we were sharing the same room. They had no control over their teenage son, were unable to feed or clothe him or pull those little levers of promise and affection with which parents negotiate domestic life with their children. My real existence took place in the camp, wheedling dog-eared copies of Popular Mechanics and Reader's Digest from the American merchant seamen in the men's dormitory, hunting down every rumour in the air, waiting for the food cart and the next B-29 bombing raid. My mind was expanding to fill the possibilities of the war, something I needed to do on my own. Once I separated Jim from his parents the novel unrolled itself at my feet like a bullet-ridden carpet.

Even then, I had to leave out many things that belong in a memoir rather than a novel. Lunghua camp, with its 2,000 internees, was a grimy bidonville, a slum township where, as in all slums, the teenage boys ran wild. There were unwatched screwdrivers or penknives to be snaffled, heroic arguments with a bored clergyman about the existence of God, buckets of night soil to be hoisted from the G-block septic tank and poured into the tomato and cucumber beds that were supposed to keep us alive when the Japanese could no longer feed us. In a bombed-out building I found a broken Chinese bayonet, sharpened the stump of blade and used it to prise away the bricks of the kitchen coal store, filling a sack with precious coke that would briefly break the chill of our unheated concrete building. My father said nothing, feeding the coke into a miniature brazier as he rehearsed his lecture on science and the idea of God. I ran off, and nagged the off-duty Japanese guards in their bungalows until they let me wear their kendo armour, laughing as they thumped me around the head with their wooden swords.

In 1984 the novel was published, a caravel of memories raised from the deep. Enough of it was based on fact to convince me that what had seemed a dream-like pageant was a negotiated truth. Curiously, my original memories of Shanghai still seemed intact, and even survived a return trip to Shanghai, where I found our house in Amherst Avenue and our room in Lunghua camp – now a boarding school – virtually unchanged.

Photographs showing the remains of the Lunghua Civilian Assembly Centre, where J G Ballard was interned as a child 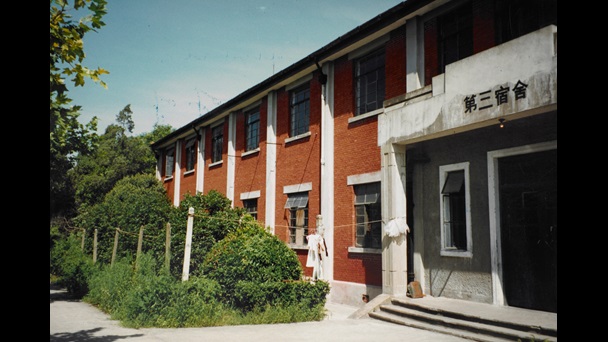 J G Ballard returned to Shanghai and the Lunghua camp in 1991. These photographs were taken on his trip.

Usage terms © J. G. Ballard. Reproduced by permission of the J. G. Ballard Estate. All rights reserved. You may not use this work for commercial purposes and the copyright holder must be credited.

Then, in 1987, like a jumbo jet crash-landing in a suburban park, a Hollywood film company came down from the sky. It disgorged an army of actors, makeup artists, set designers, costume specialists, cinematographers and a director, Steven Spielberg, all of whom had strong ideas of their own about wartime Shanghai. After 40 years my memories had shaped themselves into a novel, but only three years later they were mutating again.

Hazy figures now had names and personalities, smiles and glances that I had seen in a dozen other films: John Malkovich, Nigel Havers, Miranda Richardson. With them was a brilliant child actor, Christian Bale, who uncannily resembled my younger self. He came up to me on the set and said: ‘Hello, Mr Ballard. I'm you.’ He was followed by an attractive young couple, Emily Richard and Rupert Frazer, who added: ‘And we're your mum and dad.’

Coincidences were building strange bridges. Thanks to the film studios in Shepperton, many of my neighbours worked as extras, and now called out: ‘Mr Ballard, we're going to Lunghua together.’ Had some deep-cover assignment led me to Shepperton in 1960, knowing that one day I would write a novel about Shanghai, and that part of it would be filmed in Shepperton?

Spielberg, an intelligent and thoughtful man, generously gave me a small role as a guest at the opening fancy-dress party. Warners had rented three houses in Sunningdale to stand in for our Shanghai home. When I arrived at the location I found an armada of buses, vans and coaches that filled entire fields and resembled the evacuation of London. Bizarrely, it also reminded me of the day we were bussed into Lunghua from our assembly point at the American club near the Great Western Road. I can still see the huge crowd of Brits, many of the women in fur coats, sitting with their suitcases around the swimming pool, as if waiting for the water to part and lead them to safety.

The Sunningdale house where the fancy-dress party was filmed closely resembled our Amherst Avenue home, but this at least was no coincidence. The expat British architects in the 1930s who specialised in stockbroker's Tudor took the Surrey golf course mansions as their model. Past and present were coming full circle. The Warners props department filled the house with period fittings – deco screens and lamps, copies of Time and Life, white telephones and radios the size of sideboards. In the drive outside the front door, uniformed Chinese chauffeurs stood beside authentic Buicks and Packards. A 12-year-old boy ran through the costumed guests, a model aircraft in one hand, racing across the lawn into a dream.

Surprisingly, it was the film premiere in Hollywood, the fount of most of our planet's fantasies, that brought everything down to earth. A wonderful night for any novelist, and a reminder of the limits of the printed word. Sitting with the sober British contingent, surrounded by everyone from Dolly Parton to Sean Connery, I thought Spielberg's film would be drowned by the shimmer of mink and the diamond glitter. But once the curtains parted the audience was gripped. Chevy Chase, sitting next to me, seemed to think he was watching a newsreel, crying: ‘Oh, oh . . . !’ and leaping out of his seat as if ready to rush the screen in defence of young Bale.

I was deeply moved by the film but, like every novelist, couldn't help feeling that my memories had been hijacked by someone else's. As the Battle of Britain fighter ace Douglas Bader said when introduced to the cast of Reach for the Sky: ‘But they're actors.’

Actors of another kind play out our memories, performing on a stage inside our heads whenever we think of childhood, our first day at school, courtship and marriage. The longer we live – and it's now 60 years since I reluctantly walked out of Lunghua camp – the more our repertory company emerges from the shadows and moves to the front of the stage. Spielberg's film seems more truthful as the years pass. Christian Bale and John Malkovich join hands by the footlights with my real parents and my younger self, with the Japanese soldiers and American pilots, as a boy runs forever across a peaceful lawn towards the coming war. But perhaps, in the end, it's all only a movie.

This article was first published in the Guardian in March 2006