'Musée des Beaux Arts', 'Their Lonely Betters' and 'The Shield of Achilles'

John Sutherland describes the life of W H Auden and takes a look at three of his poems.

Wystan Hugh Auden has two identities. He is, many would argue, the greatest English lyric poet of the 20th century. He is also, few would deny, a top-ranked American lyric poet of a rather different, more reflective character.

He was born, in 1907, in York, into the professional middle classes – the son of a doctor. He got on well with his parents and his two male siblings. He took from his childhood two main ideological elements which would remain at the centre of his verse. One was the High-Church Anglicanism of his family. Auden is, in one of his many parts, a religious poet, concerned as much with the human spirit as John Donne or Gerard Manley Hopkins.

The other ideological element was a fascination with psychoanalysis, picked up from volumes by and about Freud in his father’s library. Fascination became admiration which reached its highest point in his poem on the death of Freud, in 1939, with its much quoted lines: ‘to us he is no more a person / now but a whole climate of opinion’. Young Wystan came to consciousness as the world was plunged into a war more terrible than any that had preceded it. War would be, in his term, ‘the climate of his time’.

A clever child, he was educated at the ‘minor public school’ Gresham's, in Norfolk. Minor or not, Gresham’s was an unusual institution in that it encouraged artistic talent in its pupils. The future composer Benjamin Britten was a near contemporary of Auden’s, as – a year or two below him – was future poet Stephen Spender and his brother (later the distinguished photographer) Humphrey Spender. Gresham's was also unusually tolerant of boys, like Auden, Britten and the Spenders, whose sexuality, as they passed through adolescence was gay or uncertain.

Auden went on to Oxford University, interested in one thing only – his poetry. Notoriously eccentric, he incarcerated himself in his undergraduate rooms, curtains drawn, a revolver, it was rumoured, in his desk, writing all the time. He received without any remorse a third-class honours (‘a gentleman’s third’, as it was called by those too proud, or otherwise engaged to work at their studies). He had not gone to Oxford for higher education. 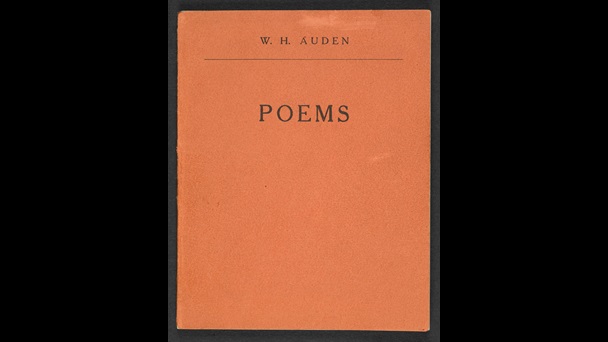 Usage terms Poems: Copyright © 1928 by W.H. Auden, renewed. Reprinted by permission of Curtis Brown, Ltd. Except as otherwise permitted by your national copyright laws this material may not be copied or distributed further.

Along with the so-called ‘gang’ – Spender, Christopher Isherwood and himself at the centre – he spent time in pre-Nazi Germany, cultivating personal and literary freedoms. He taught when he needed money, and was remembered as a good teacher.

His early promise as a poet was recognised by T S Eliot, at Faber and Faber, who published – with great fanfare – Poems, 1930. The date was significant. Auden was now recognised as the leading ‘Thirties’ poet. In the years that followed he kept body and soul together freelancing, writing all the time. He travelled obsessively to scenes of war, notably Spain and China.

Now confirmed gay, he would never find a truly rewarding relationship. The 1930s were, as he memorably put it, ‘The Age of Anxiety’ and ‘a low dishonest decade’. His personal anxieties added to a sense of general malaise.

In January 1939, he and his comrade Isherwood migrated to America, fearing Europe was finished. Both would stay there and eventually take on American citizenship. In America, Auden was an honoured man of letters, but a less engaged poet than he had been. His work was more reflective.

He returned regularly to England, particularly in his role as Professor of Poetry at Oxford, where he was very happy, from 1956–1961. He decided to end his days at the University he loved. He died in Austria, in 1973, where he had a second home.

‘Musée des Beaux Arts’ is not, in itself, a difficult poem but it is baffling if one does not know where it is coming from. Auden was a much travelled poet. In 1938 he spent several months in Belgium. They were ominous months: war was looming.

The ‘Musee’ in the poem is the Royal Museums of Fine Arts of Belgium, in Brussels. It has a magnificent collection of the 16th-century artist Pieter Bruegel the Elder’s paintings. We should picture the poet sauntering, on a quiet summer afternoon, through the galleries, savouring Bruegel’s masterpieces. The poem has no rhyme scheme – it’s a stream of unstructured consciousness.

The first painting the poet sees is that of Herod’s census – the sinister search for the unborn Jesus narrated in the Gospel of Luke. Mary and Joseph flee to Bethlehem. In the gospels ‘the miraculous birth’ is an all-important event. But in the painting it is no big thing. Not as important, for example, as unloading a cart is to the carter, or skating is to children on their ‘pond at the edge of the wood’. A baby is born in a barn? So what. It happens every day in Bethlehem. The census-taking is going on at an improvised office window. The painting is all detail, as is everyday life.

The Census at Bethlehem 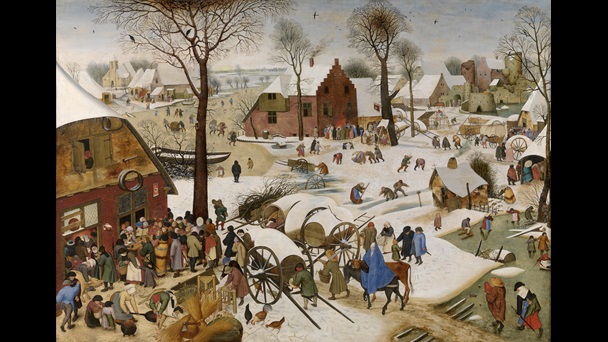 And the crucifixion, that ‘dreadful martyrdom’. It too for those at Calvary is just, as Bruegel depicts it, another execution.

The bustling crowd’s interest is no greater than that of the dogs and horses. The Romans are crucifying someone. So what?

And, finally, The Fall of Icarus.

Landscape with the Fall of Icarus 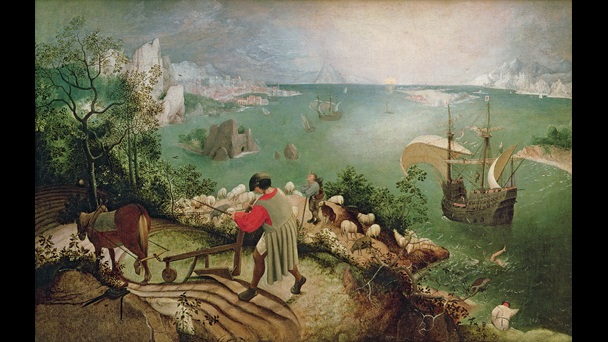 There are no seething crowds here. The painting is a parable on human aspiration. Daedalus and his son, Icarus, were imprisoned on the island of Crete. Daedalus created wings to fly away. Icarus, ambitiously, flew too near the sun. The wax holding his wings together melted and he plunged into the sea and was drowned.

If you look carefully, you can see his legs as he drowns, in the far distance of the painting. They are dwarfed by the horse’s rump. Most visitors to the Museum miss the detail which gives the poem its title.

Earth abides: the ploughman ploughs. Trading vessels go about their commercial business. Life goes on. The death of an unlucky aviator is of no more importance than the fall of a sparrow. Mankind deludes itself if it thinks otherwise. The poem is an exquisitely written sermon, advocating what? Stoicism.

But does 'Musée des Beaux Arts' mean anything without the pictures? Probably not. It is a poem dependent on things outside itself. With that thought in mind, move on to ‘Their Lonely Betters’.

This poem was published in a collection called Nones, in 1951. In the ecclesiastical clock, ‘nones’ is the fifth of the canonical hours. Three o’clock in the afternoon. Auden, his biography tells us was in Ischia, by the Bay of Naples, where he liked to summer at this period of his life.

We picture him sitting in a deck-chair, under a tree in his garden, thinking what the poet Marvell called ‘green thoughts in a green shade’. This poem is much more self-contained than the previous one – something created formally by the tight rhymes and strict decasyllabic (ten syllable) lines. Its meaning must be unlocked, like a jewel in a box.

The poem ponders the proverbial saying – ‘I’m as happy as all the birds in the air’. Why, though, are the birds happier than we are? We, their betters, have so much more than they do to enrich our lives.

The poem goes on to wrestle with that perennial problem for poets: is language a blessing or a curse?

Would we be happier if, like the beasts in the field, the birds in the air, the fish in the sea, we did not have words to lie with or to think with?

Underlying the poem is an essay by Freud which Auden returns to time and again in his poetry: ‘Civilisation and its Discontents’. What, simply, Freud argues here is that the more civilised we become, the unhappier we shall be. Our aspirations, achievements, human ‘progress’ and our increasing ability to communicate, is a one-way trip to loneliness and despair. But what choice do we have? We are the planet’s only linguistic species. Best relax in our beach chair, enjoy the sunny remains of the day, and live with our plight. The poem ends on a note of sad serenity.

'The Shield of Achilles'

'The Shield of Achilles', be warned, is Auden’s most terrible poem – terrible because it is hopeless.

War which threatened to destroy civilisation was the background to Auden’s life – from the Great War of 1914–1918, through WW2, to the cold war, with its imminent threat of planetary extinction within four minutes from the launch of the rockets. The first H-bombs, weapons of awesome destructive power, were exploded a few months before Auden published the poem.

The Shield of Achilles by W H Auden 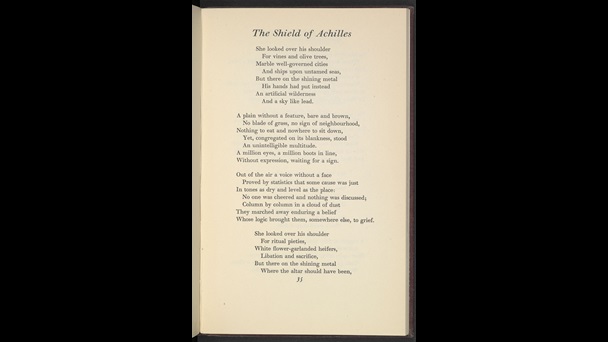 Auden’s poem ‘The Shield of Achilles’, published in the anthology of the same name in 1955.

Usage terms ‘The Shield of Achilles’: Copyright © 1952 by W.H. Auden, renewed. Reprinted by permission of Curtis Brown, Ltd. Except as otherwise permitted by your national copyright laws this material may not be copied or distributed further.

20th-century war bore no resemblance to the heroic conflict chronicled in the oldest, greatest poem we have – Homer’s The Iliad – the story of the Trojan War. Auden had been sent, by the US military authorities to examine damage in post-war Germany. What he saw left an indelible mark on him. Equally as terrible as the actual destruction was the wasteland which modern war left: there are few more chilling lines in the whole of English verse than the stanza beginning ‘A ragged urchin …’.

Some understanding of the mythological framework of the poem is necessary. Thetis, the mother of the great Greek warrior Achilles had the armourer Haphaestus forge, and ornament, a shield for her son to protect him in battle. Emblazoned on it were all the things a ‘good war’ is fought for. See the stanzas beginning ‘She looked over his shoulder …’.

Pope's drawing of the shield of Achilles 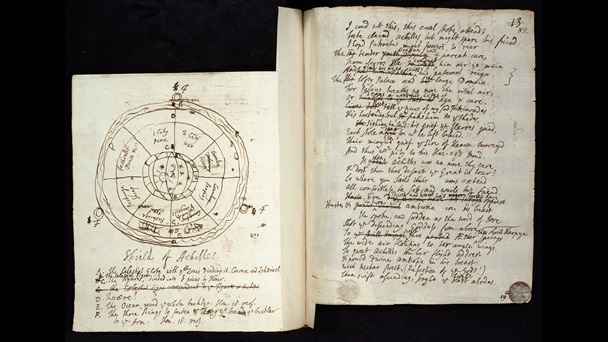 Alexander Pope included this sketch of the shield of Achilles in the manuscript draft of his translation of Homer’s Iliad.

But what, in the age of Auschwitz, Dresden, Hiroshima, would be etched on the shield? The poem gives a grim answer. Poets, said Shelley, ‘are the unacknowledged legislators of the world.’ No poet of the 20th century fulfilled that role better than Auden.