Barbara Morden looks beyond the period detail and romantic conventions of Rebecca to uncover an archetypal story of female identity formation.

Rebecca: an allegory of love

Who and what is Rebecca? Is this a novel of social realism or a popular romance? Maybe it is a hybrid like Charlotte Brontë’s Jane Eyre which Daphne du Maurier admitted was an influence. Let us investigate.

It is said that during World War II Field Marshal Erwin Rommel kept a copy of Rebecca at his headquarters, and that it was the source for a Nazi spy-code. Perhaps more significant was the German plan to use the novel as a field-guide to British life and habits in the event of an invasion. Undoubtedly then, Rebecca contains social realism.

In the opening sequences, describing hotel life in the south of France between the wars, social manners and the nuances of polite and not so polite discourse are captured faultlessly, with the motif of Mrs Van Hopper extinguishing her cigarette in a pot of cold-cream described with vulgar clarity. Back in England, the representation of upper- and middle-class attitudes, dress codes and contemporary speech patterns rings true, while the aural and visual features of the Cornish landscape are realised with confidence born of intimate knowledge. Rebecca, the author acknowledged, is based on facts: her uneasy relationship with her father (the actor-impresario Gerald du Maurier); her profound home-sickness for Cornwall when posted with her husband, Major Frederick ‘Boy’ Browning, to Alexandria in 1937; and her all-consuming jealousy of his first fiancé, Jan Ricardo, who later committed suicide. The novel reflects ‘real’ time, place, emotions and experience.

However, the fact that Rebecca, a sensation in 1938, today sustains paperback sales exceeding 4,000 a month, suggests an appeal other than period or biographical verisimilitude. Many read the novel for the glamour and love interest, and some categorise it as light reading – a popular romance. But this is not a love story of the sentimental kind. After all, the Cupid figurine in the morning-room is shattered, and it is the statue of a ‘naked faun’, playing ‘his part’ against the backdrop of lurid red rhododendrons, that sets the tone. Rebecca, I suggest, is an ‘Allegory of Love’ of a dark, introverted kind: an exploration of the ‘fever and the burden’ of loving, its apprehensions, passions, perversions and moral ambiguities acted out as psychodrama. 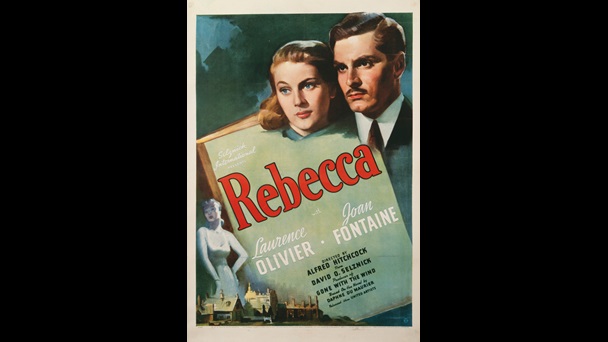 Rebecca’s popularity accelerated even further after the release of Alfred Hitchcock’s film adaptation in 1940, starring Laurence Olivier and Jane Fontaine.

From the opening paragraph ‘Last night I dreamt I went to Manderley again …’ we enter the ‘moving unquiet depths’ of dream. Here linear time is suspended, the narrative moving seamlessly between past, present and potential futures. This, the dream convention, is a long-established literary trope which through dissociation allows us to probe beneath material reality to discover other layers of perception and identity.

The whole narrative is made up of a series of dreams, daydreams and nightmares, accessed through an anonymous and, it seems at times, androgynous avatar: the Girl. Her actual name evades us, and her significance is only understood by her not being the vibrant, glamorous figure that was the late Mrs Rebecca de Winter. This definition through negation is embedded in a network of binary oppositions: the Girl’s straight, lank ‘bob’ and flannel skirt juxtaposed with Rebecca’s cloud of lustrous black hair, pearls and black satin; the enclosed rose garden contrasted with the open expanse of an unquiet sea; and the rhododendrons, ‘blood red and luscious’ set against the fallen, bruised petals of white azaleas in the grounds of Manderley, itself a place of contrasts and ambiguity. On the one hand, it is an elegant social space with vistas across the lawns, a ‘thing of grace and beauty, exquisite and faultless’. On the other, it is a brooding Gothic mansion with a ‘great stone hall’, mullioned windows, a minstrels’ gallery, dark staircases and long corridors, closed doors withholding secrets: the ‘fatal castle’.

In gender theory this is space contested by another binary opposition: patriarchal repressive authority set against the urge for female self-realisation. However, the castle can also serve as an ungendered psychic space. Here we meet a range of familiar archetypes found in storytelling across the centuries: the innocent ‘maiden’; the attractive, enigmatic older man, often doubling as ‘beast’ or ‘ogre’. Then there is the ‘chatelaine’ or old crone – the keeper of the keys of the castle and its secrets; and the experienced older woman mutating into vampire or serpent. Because this is a psychic, dream landscape where normal laws do not hold, these types frequently merge and exchange in the phantasmagoria. In the castle the avatar/soul confronts its demons and terrors, works though dilemmas, explores options and faces challenges, shaping an identity and perhaps a role. Manderley is this castle.

The avatar-narrator-protagonist in the novel has, we are told, just come of age and at this threshold is granted a choice: to remain in a state of undeveloped dependence or discover personal autonomy. In choosing the latter and Manderley, she/we enter the fatal castle and embark on a tortuous process of image-making, self-fashioning and role-playing, trials and experiments.

Early in their relationship the Girl admits to Maxim her desire to shed her youth and awkwardness and emerge as a sophisticated woman of 36. She wants to be a ‘Rebecca’, beautiful, gifted, confident and vividly alive. In adopting Rebecca’s distinctive signature, the process of modelling oneself in her image begins. This requires concentrated doubling, merging and shape-shifting, for ‘Rebecca’ has many facets: a cosmetic image framed in the looking-glass; the elegant model in couture clothes; the accomplished yachtswoman and lithe equestrian of her Academy portrait; a sweetly demure Rebecca in fancy dress – the portrait of Caroline de Winter brought to life and catastrophically reprised by the Girl for the Manderley ball. Gradually, the Girl is subsumed by her model. Eaten up with ‘bitterness and resentment’, she loses weight, colour and vitality until the face reflected in the mirror is that of ‘Rebecca’, showing symptoms of a broken heart, or is it pregnancy, even cancer? For such obsession means total abnegation of the self – a kind of death.

The several aspects of the woman that is/was Rebecca shift again when Maxim, confessing the sham that was his marriage and his own crime, introduces another portrait into the mix. Mention of Rebecca’s ‘slow treacherous smile’ confronts us with the Mona Lisa. In the late 19th century Walter Pater appropriated Leonardo’s portrait as the epitome of the ‘femme fatale’ – her smile that of insidious, destructive desire born of hate. As Mrs Danvers howls, Rebecca ‘hated all men … it was like a game to her … They were all jealous, all mad for her’.

This Rebecca is a mythic creature, both Sphynx and Lamia (she ‘gave you the feeling of a snake’), a woman with a heart dry as the desert and with passions volatile and violent as the sea. The ocean that ebbs and flows throughout the narrative, throws up the wreck of Rebecca’s boat and her corpse – a Harpy claiming retribution. Is this the inevitable outcome of female empowerment? Possibly, for there is a final dream of a woman before a mirror ‘very pale, very lovely, framed in a cloud of dark hair’, laughing with narrowed eyes, her luxuriant hair brushed by a lover who winds her ringlets into a rope around his own neck, as a hangman’s noose. Goaded into committing murder, Maxim has been ‘framed’ by Rebecca the man-hater and will be sacrificed.

But it is not inevitable. There are other kinds of ‘framing’ and loving. On their first meeting, the Girl ‘frames’ Maxim in the likeness of a Gentleman Unknown, conjuring up ‘dim dungeons, a past of whispers in the dark, of shimmering rapier blades, of silent, exquisite courtesy’. Here is another key archetype, the hero-villain of Gothic romance, a character feared and yet to whom we are drawn and compelled to pursue ‘“Adown Titanic glooms of chasmed fears”’ in a bid to understand, perhaps to save from despair. The quotation is from Francis Thomson’s The Hound of Heaven, offering a hint in Chapter 4 of the lie that is Maxim and Rebecca’s marriage and that romantic ideals can be flawed.

Possessed or in possession?

And so we come to Mrs Danvers, ‘tall and gaunt, dressed in deep black, whose prominent cheek-bones and great, hollow eyes gave her a skull’s face’. She holds the keys to the fatal castle and its secrets. Possessing and possessed by Rebecca and Manderley, she is sensed as an omnipresent, all-seeing malignant force. The terror is ratcheted up in Chapter 18 when ‘fawning, intimate, unpleasant’, she forces the Girl/us to handle the first Mrs de Winter’s underclothes and imagine sexual congress in the bath, in the bed, with multiple partners and at numerous degrees of depravity. At that point we are taken to the edge, identities dissolve and merge as the abyss opens up beneath a now tripartite archetype comprising maiden, grown woman and the old crone. Some have suggested this device signifies lesbian attraction and repulsion, identifying elements in the novel and in its author that endorse this. However, the trope is an ancient one representing the ‘ages of (wo)man’, signifying the inevitable depredations of time and its impact on life and love: a reality to be embraced.

Essentially, Rebecca is a narrative of love, fear, jealousy, passion and retribution, refracted through the conventions of romance. It tells of child-like desire to hold on to golden moments, and believe in ’Once upon a time’ and ‘happy ever after’. It also tells of how, awakening from the dream, we must grow up and take possession of what we are, what we have and what is possible. Until Maxim confesses his guilt as a murderer, his marriage to the Girl (the ‘in-between maid’) remains unconsummated. Then, with the admission that Maxim’s love for Rebecca is a fiction, the transformation from Girl to Woman can be realised: ‘I was the self that I had always been … But something new had come upon me that had not been before … I was no longer afraid’. So, self-possessed (whatever that ‘self’ has proved to be) and in real time they march ‘in unison’, abandoning the blackened ‘sepulchre’ of ‘fear and suffering’ that is Manderley, accepting the moral and social compromise of a life lived rather than dreamed.

In fact, that reality was a foregone conclusion, spelt out in Chapter 2: ‘I suppose it is his dependence on me that has made me bold at last’. But then we chose to ignore it, abandoning ourselves to Rebecca’s spell.