Culture in Weimar Germany: on the edge of the volcano

Andrew Dickson explores the vibrant, experimental and precarious culture that developed in Weimar Germany in the 1920s and early 1930s, where figures such as Paul Klee, Kurt Weill and Christopher Isherwood were making art, music and literature.

The Weimar period has gone down in history as a period of remarkable artistic energy – a roaring surge of modernist art, music, theatre, design, dance and film, when the constraints of 19th-century manners and mores were torn down, and experimentation of all kinds remade the cultural landscape. The surprising thing is that the legend is true, at least in outline. For an all-too-brief window during the ‘golden 1920s’ and early 30s, while Germany’s political life was in turmoil and the country was being battered by an economic hurricane, the arts had rarely been so vibrant. It is no exaggeration to say that in the Weimar years, Germany was the most exciting place in Europe to be. Possibly even the world.

In the words of one historian, it was ‘a dance on the edge of a volcano’.[1] The entry of the United States into the First World War in 1917 helped seal Germany’s fate, and the Allies did everything in their power to ensure that the country would never again threaten the balance of world peace. As well as demilitarising Germany, the Versailles agreement plunged the nation into a profound economic slump: inflation rapidly became hyperinflation (by late 1923 the dollar was worth over 4 billion marks), and unrest swept through the German states, with violent struggles between extremist groups from every point of the political spectrum.[2]

At the same time, the ambitions of the Weimar Republic, which was founded in 1919 – openness and tolerance, underpinned by radical social democracy – created a new and more liberal atmosphere. The constitution guaranteed every German the right to ‘express his opinion freely in word, writing, print, picture or in any other manner,’ and German artists, many of whom had been exposed to modernist movements in France, Italy and America, rushed to find forms that could reflect the tumultuous realities that surrounded them.[3]

One innovation emerged in Weimar, the very town where the 1919 assembly ratified the German Republic’s new constitution (in, as it happened, the town theatre, where Goethe and Schiller had once directed plays). That same year, the young architect Walter Gropius founded a school that would unite the applied arts in a new organisation he christened the Bauhaus (roughly ‘house of building/architecture’). Gropius’s vision was of a community which could collaborate in what he described as ‘the new building of the future, which will be everything together, architecture and sculpture and painting, in a single shape, rising to heaven from the hands of millions of craftsmen as a crystal symbol of a new emerging faith’.[4]

Offering tuition in a remarkable variety of activities – furniture design, painting, photograpy, typography, factory planning, ceramics, theatre design, textiles, architecture, dancing – the Bauhaus was part artistic movement, part utopian social commune, and as much of an experiment as the Weimar Republic itself. Artists from many areas of Europe passed through: painters Paul Klee, Vasily Kandinsky and Josef Albers were on the visual arts faculty, designer Marcel Breuer taught cabinet-making, and the constructivist photographer and painter László Moholy-Nagy offered instruction in metalworking.

After moving to a purpose-designed building by Gropius in Dessau in 1925, the Bauhaus became celebrated for promoting a rational and functionalist style, elegant in its restraint, often using cutting-edge materials such as aluminium, chrome and glass. Its products – Breuer’s tubular steel chairs, Wilhelm Wagenfeld’s bulbous lamp – brought high-concept modernism to mass consumers, and reflections of bold, clean Bauhaus lines are visible in product design even today.[5] 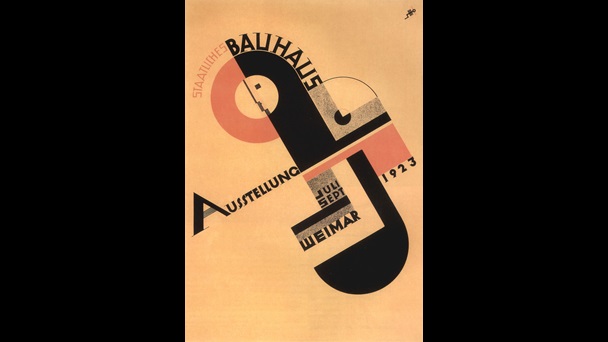 This poster, for the first Bauhaus exhibition in 1923, shows the School’s experimental style, its use of geometric shapes and bold primary colours.

Exterior of the Bauhaus school at Dessau, designed by architect Walter Gropius in 1926 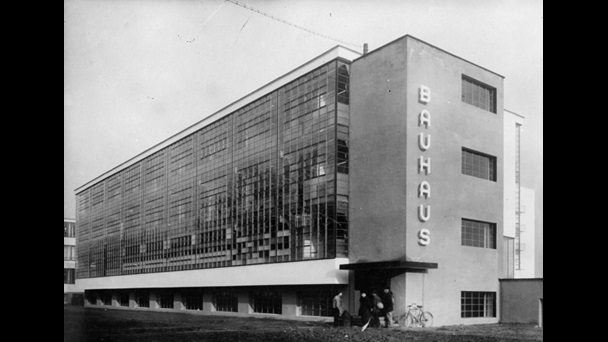 The Bauhaus School, originally located in Weimar and later in Dessau, was an influential modernist art school which pioneered the blending of art, functionality and mass-production, paving the way for product design as we know it today.

Across in cosmopolitan Berlin – whose gaudy, electric-lit streets were endlessly remarked on by visitors – even bolder experiments were being tried out. One of the biggest theatrical events of the Weimar period came in 1928, with the debut of Der Dreigroschenopera (‘The Threepenny Opera’), billed as a ‘play with music’ by its co-creators Bertolt Brecht and Kurt Weill. Based on John Gay’s 18th-century English ballad opera The Beggar’s Opera, the piece relates the story of the villainous but charismatic Macheath, nicknamed ‘Mack the Knife’, as he dodges the authorities and attempts to cheat the hangman’s noose. Though notionally set in the underworld of 19th-century London, Brecht and Weill’s update satirised both the Berlin they knew – with its ready-made cast of cut-throats, conmen and small-time crooks – and, by extension, the entire capitalist system.

Laced with bitter irony and propelled by Weill’s raucous, jazz-inflected score, The Threepenny Opera scandalised many critics (one paper called it a ‘noxious cesspool’), but it became a huge hit, being performed over 4,000 times at over 50 theatres across Germany within a year.[6] A defining example of what Brecht had recently christened ‘epic theatre’, in which the naturalistic ‘fourth wall’ was torn down and the audience forced to question the nature of dramatic spectacle, it also broke daring new ground in its blend of ‘high’ and ‘low’ culture.

Premier of Brecht’s musical, The Threepenny Opera, at the Theatre am Schiffbauerdamm, Berlin 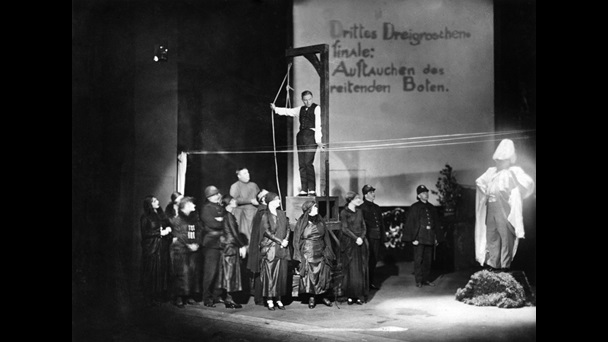 In what was one of the biggest theatrical events of the Weimar period, Brecht and Weill’s Threepenny Opera was a powerful satire of capitalist society.

Brecht had got his start on the thriving Berlin Kabarett scene, and many other artists were drawn to this gaudy, seductive underworld, with its indulgent approach to sexuality, ethnicity and gender. In 1925 the African-American dancer Josephine Baker brought her ‘Revue Négre’ show across from Paris, where it was a rampant success, and four years later the English writer Christopher Isherwood moved to the city to join his friend, the poet W H Auden. Isherwood found Berlin a revelation – not just creatively, but via the burgeoning gay scene, which both he and Auden explored with considerable energy and enthusiasm.

Having fallen in love with a young German man, Heinz Neddermeyer, Isherwood distilled many of his experiences into the autobiographical short novels Mr Norris Changes Trains (1935) and Goodbye to Berlin (1939), which offer a cool evocation of life on the fringes of Berlin society.[7] ‘I am a camera with its shutter open, quite passive, recording, not thinking,’ Isherwood writes on the first page of the second work,[8] a sentence that seems to catch the casual hedonism of the period, at least among the city’s expatriates. Yet another depiction of this world appears in Josef von Sternberg’s 1930 Der blaue Engel (‘The Blue Angel’), Germany’s first full-length sound film; hugely popular, it made a star of Marlene Dietrich, who played a seductive cabaret performer.

Auden and Isherwood leaving for China in 1938 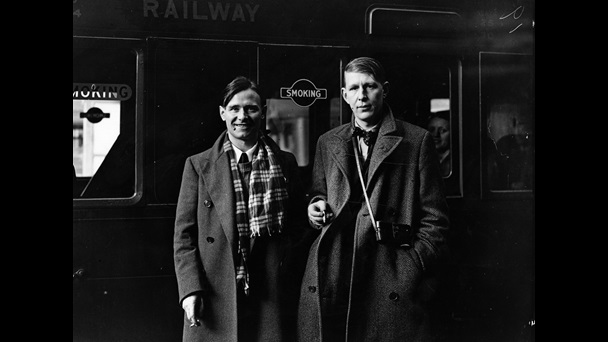 Photograph of W H Auden (right) with his friend, and occasional lover, the novelist Christopher Isherwood (left) on the platform of Victoria Station, London, in 1938.

The era of decay

Other artists saw the bleaker side of Weimar life. The expressionist painter Otto Dix, haunted by his experiences as a machine-gunner during the First World War, channeled his energies into sardonic and often ghoulish depictions of Berlin. The central panel of Dix’s famous triptych Metropolis (1927–28), portrays a jazz club teeming with jitterbugging, bobbed ‘New Women’, but its side panels tell a different story. In one, a wounded veteran stands by, his companion dead on the pavement; in the other a crowd of scantily clad young females streams past, insensible to the suffering that surrounds them. The pen-and-ink caricatures of Georg Grosz, like Dix a member of the Neue Sachlichkeit (‘New Objectivity’) movement, are even more unsparing – a rogue’s gallery of plump businessmen, leering prostitutes, corrupt officials and hollow-eyed down-and-outs.

Two of the most remarkable films of the Weimar boom in film-making, Robert Wiene’s Das Cabinet des Dr Caligari (1920) and Fritz Lang’s Metropolis (1927), also tend towards the realm of nightmare – Caligari plays up to contemporary fears about Lustmord (sexual violence) with a Gothic saga of a hypnotist who manipulates a patient to commit murder on his behalf, while Metropolis offers a dystopian vision of the future, set in a city segregated between wealthy industrialists and a numberless army of drones who toil in underground factories. Though hugely different in form, both works could be said to reflect the schisms that divided German society in the ‘golden 1920s’. 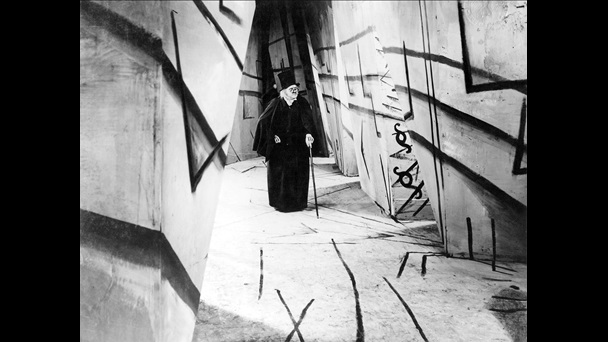 In any case, this world – golden or otherwise – was not to last long. After a series of running battles with the communists, right-wing groups gained the upper hand; membership of the NSDAP surged from 25,000 in 1925 to 180,000 four years later, and rose still higher after the Wall Street Crash in October 1929, which plunged the heavily indebted Germany into even deeper economic chaos.[9] In the 1932 national elections, the Nazis became the largest party. Within a year, Hitler was in the Reichstag.

Clubs and theatres were shut, books were burned on the streets of Berlin, and fierce campaigns against feminism, jazz, modern architecture and much else were launched. Experimental art was held up to public ridicule – most infamously in the 1937 exhibition of ‘degenerate’ art, which paraded works from what Goebbels labelled ‘the era of decay’, among them canvases by Klee, Dix, Max Beckmann and Ernst Ludwig Kirchner.[10] Many artists – particularly those who were Jewish – fled overseas, never to return. Less than 15 years after it had begun to stir, the first truly modern culture that Germany had known was brought brutally to a halt.

[1] Peter Gay, Weimar Culture: The Outsider as Insider (London: Secker and Warburg, 1968), p. xiv. Gay is the classic introduction, and despite its tendency to hyperbole remains still the best place to start. Walter Laqueur’s Weimar: A Cultural History (London: Weidenfeld & Nicholson, 1974), is also good, though more circumspect in its assessment of the importance of Weimar culture. Essays and documents from the period are usefully anthologised in The Weimar Republic Sourcebook, ed. by Anton Kaes, Martin Jay and Edward Dimendberg (Berkeley and Los Angeles: University of California Press, 1995).

[5] Examples of Bauhaus work feature in numerous histories of design; one of the most appealing is Magdalena Droste’s illustrated Bauhaus, 1919–1933 (Cologne: Taschen, 1998), which draws on the collection of the Bauhaus Archive in Berlin.

[7] Fittingly, Isherwood’s Berlin novels later found their way back on stage when they were used as source material for John Kander and Fred Ebb’s 1966 musical Cabaret, the film's Kit-Kat Klub bears an intimate resemblance to the seedy real-life joints haunted by Isherwood and his circle.

[9] Detailed accounts of the historical backdrop are offered in Stibbe (which is particularly good on the social context) and Weitz.

[10] A useful account of the exhibition – which was, fascinatingly, remounted at the Neue Galerie in New York City in 2014 – is by Michael Kimmelman, ‘The Art Hitler Hated’, New York Review of Books, 19 June 2014 <http://www.nybooks.com/articles/2014/06/19/art-hitler-hated/>. On Nazi approaches to culture, the most detailed recent survey is  National Socialist Cultural Policy, ed. by Glenn R Cuomo (New York: St Martin’s Press, 1995).