Punk - Oh bondage up yours! A personal point of view

Shelagh McCarthy first saw the Sex Pistols on television the day before her fourteenth birthday. She remembers how this experience changed her life and reflects on what punk has meant to her.

I was 14 in 1976. I lived in suburbia and went to a catholic all-girl school. My initial experience of punk – like the majority of proto-punks – was mediated through magazines, my best-friend’s older brother’s record collection and posters, newspapers and colour supplements, mix-tapes, record covers – backs and sleeves, a few popular culture TV programmes like Top of the Pops, Marc, So it Goes, radio and word of mouth. There was no social media, no YouTube – there was no internet. I saw my first live gig in 1978. My pop idol was David Bowie, so I expected at lot from potential pin-ups. I wasn’t let down by punk. 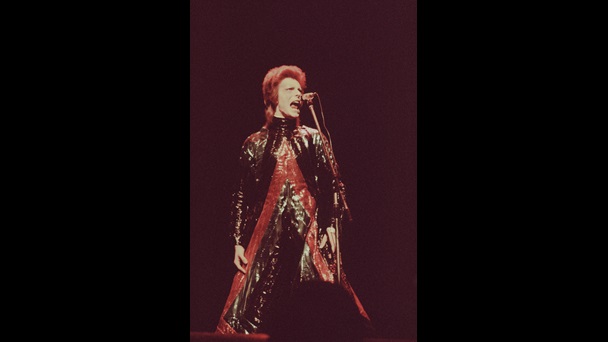 Bowie, with his outrageous 1970s clothing – and especially his use of eyeliner – influenced punk which shared his spirit of rebellion and reinvention.

The day before my 14th birthday, I was sitting on the sofa watching television. British rock band Queen was scheduled to be on an early-evening current affairs show. Instead of Queen, the Sex Pistols and accompanying Bromley contingent appeared on screen – they’d replaced Queen at the last minute. History was made in front of my eyes. Punk careered kicking and spitting into public gaze through the medium of television. The lived experience of seeing and hearing that interview profoundly influenced my subsequent way of thinking. At the time I was just gob-smacked. The whole broadcast was spectacular. I stopped buying Jackie magazine and started reading the NME.

The following day’s newspapers were filled with the voices of the morally outraged. Anarchy in the UK seemed imminent.

Sticker to promote the Sex Pistols’ single God Save the Queen 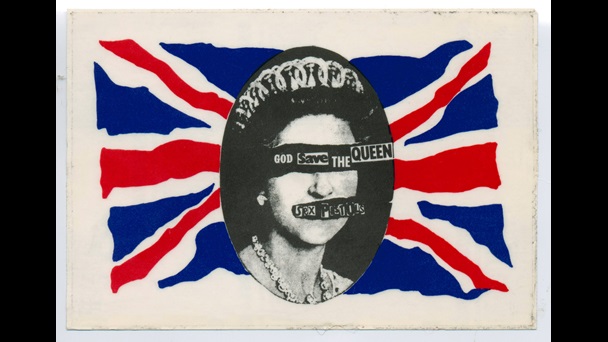 Nothing sums up the visual imagery of punk quite like the artwork on the iconic cover of the Sex Pistols’ single God Save the Queen.

Punk didn’t come out of nowhere. Malcolm Maclaren, was The Sex Pistols’ manager and partner of designer Viviene Westwood. Very influenced by previous avant-garde artists and writers from the Dadaists to Guy Debord’s Situationist International, he appropriated their ideas and re-presented them. Twentieth-century avant-garde practitioners, their influence and legacy in America and Britain, inspired the counter cultures of the 70s, encouraging them to cut-up, play with, subvert and destroy establishment culture…from Tristan Tzara to David Bowie, the way had been paved and signposted to the screaming emergence of punk in 1970s London. Here, as expected from an avant-garde (literally meaning the part of an army that goes forward ahead of the rest – think Viking Berserker), it became a caustic, filthy, furious and, to my sensibilities, joyous rebellion against the tyranny of the majority. Zeitgeist. But cultural and critical theoretical readings came much later. Punk was about doing.

Anarchy did not come. Culture as we knew it did not crumble, but it did grow positively in part as a result of the punk movement. Nothing happens in isolation, we are more than the sum of our parts. Maclaren didn’t single-handedly invent punk, Punk didn’t single-handedly right the wrongs of society, but both played parts in the formation of a more liberal, better-informed society.

Punk railed against convention and conventional means of production and consumption. I didn’t know anyone at the time who’d actually bought clothes from Vivienne Westwood’s notorious King’s Road shop SEX, (I heard much later how easy it was to shop-lift there) but ideas could be plundered. Maclaren’s carefully constructed aesthetic was ripe for the picking.

Portrait of a British punk girl with Mohican hairstyle 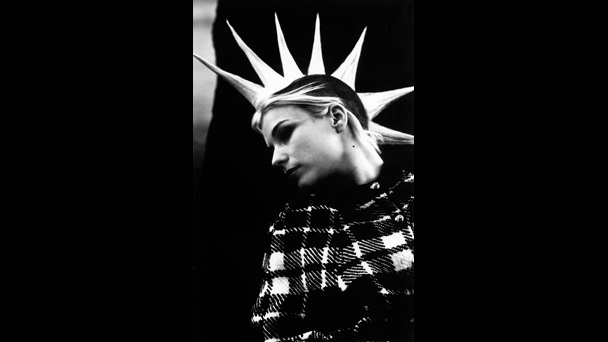 During the 1970s and 80s punks flocked to their cultural epicentre, the Kings Road in London, to see and be seen with their massive spiked hair, ripped up and remade gear - and safety pins - through skin as well as clothing.

A DIY methodology emerged. Customising clothes was a fast way of appropriating the look – cutting the sleeves off t-shirts, altering their printed designs with biro, adding other fabrics and designs – ripping up and remaking - appliqué punk-style. Safety pins became an instant badge identity and allegiance and you could hide them on your school uniform. Jamie Reid’s cut-and-paste artwork inspired a wealth of record covers, flyers and fan-generated documentary. Comics like 2000AD and music papers like the New Musical Express and Melody Maker provided platforms for alternative voices to be heard, but relied on larger established industries for their production and distribution. Home-made fanzines became a popular means of sharing information about bands and politics, recalling historical revolutionary pamphlets and pamphleteers, similar to some contemporary culture blogs and bloggers.

Revolutionary tracts old and new, manifestos, critical reviews, news, written, plagiarised, typed, montaged; hand drawn images, photographs and text collaged together through careful cutting out and pasting by hand – we had no home computers, and reproduced; screen printed, photocopied (not many of those – more likely a Bander duplicating machine), carbon papered, stapled at the top, or simply folded. These would be distributed, usually by hand, free or for a small cost to growing audiences at gigs and protests. Small independent alternative record companies were set up devoted to punk and New Wave music with brilliant radical low-tech art-work. New press and publishing companies emerged. Authors and audience alike became bricoleurs acquiring ‘new objects from across social divisions to create new social identities’.[1] We made our own stuff.

Many years later I worked for Mick Jones of The Clash. We began archiving his own extensive collections, including material from the formative years of the band. I opened a large black bag and found it filled with old cigarette boxes. The boxes were covered in handwriting. As I read the words I experienced the same intensity of mischievous joy and delight that had filled me when I first encountered punk. The words were the nascent lyrics of London Calling. Treasure indeed. Another few boxes were full of fanzines and gig flyers. We invited a valuer from Sotheby’s to give his opinion. As he leafed through the piles he would pull various flyers out and reel off four-figure sums. Authentic punk ephemera is worth big money.

The lyrics poured over as teenagers, found on the backs of records, Smash Hits, or carefully listened to and painstakingly written out by hand (no google search available) became topics of conversation and study. Through listening to punk, a significant part of a generation learned about gender inequalities, racism, civil rights, sex and poetry in a way as valuable, and in some cases more useful, as lessons learned at school. Punk politicized me along with countless others. Racism, homophobia, disability discrimination, have no acceptable place in our society. Gender inequality is a crime.

The punk movement was an influential agent of change and has become the stuff of legend judging by the numbers of people who claim to have seen the Sex Pistol’s live debut at St Martin’s College of Art in London.

I finally got a copy of Never Mind the Bollox – not a bought one – in 1978. My friend’s brother made me a cassette, The Pistols on one side, plus some stuff by the Buzzcocks, The Only Ones and the Clash. On the other side Another Green World by Brian Eno. It was recorded over two older home recordings – Love the One You’re With by Crosby, Stills, Nash and Young, one side, Robert Fripp’s In the Court of the Crimson King on the other. I made an insert out of newspaper and tipex. That’s pretty punk.

So punk is old and established now. As are many punks. Much has been written about punk’s impact and legacy, the people involved, its influences. Its unique style and methodology are well recognised, its status as a political and cultural movement endorsed by the state and capitalist market it initially sought to destroy.

Is what punk espoused still pertinent or has it become just a nostalgia-inducing fetishised commodity? Maybe it’s a bit of both. I always found punk very accommodating. All comers welcome – except hippies and bigots. It taught me valuable life lessons: nihilism only gets you so far, question authority, know your rights, don’t wear flares.