Shelagh Delaney: The Start of the Possible

Jeanette Winterson describes how Shelagh Delaney's imagination, humour and self-belief helped her to make a place for herself in the male-dominated world of 1950s and 1960s British theatre and become the country's first working-class female playwright.

The story of Shelagh Delaney, just 18, watching Terence Rattigan's Variation on a Theme and reckoning that she could do better is well known. Less talked about is her upset at a badly attended, poorly understood performance of Samuel Beckett’s Waiting for Godot. Delaney was a working-class woman in Salford, in the 1950s, who had left school at 15. She spent her wages on books and theatre tickets, and she wanted to be a Writer.

Letter from Shelagh Delaney to Joan Littlewood, sending the script of A Taste of Honey 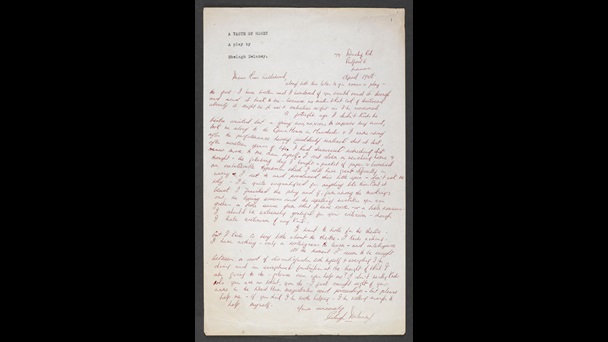 ‘A fortnight ago I didn’t know the theatre existed’. The covering letter sent by Shelagh Delaney with her typescript of A Taste of Honey.

Usage terms © With jolly kind permission Charlotte Delaney. You may not use the material for commercial purposes. Please credit the copyright holder when reusing this work.

Later, in a filmed clip for ITV available on YouTube, she tells a pompous young interviewer who asks her how she feels about the critics, that it was seeing the bricklayers and the cabbies going to her play in London's East End, that had meant most to her. Hers was an inclusive drama – socially and theatrically.

Review of A Taste of Honey by Lindsay Anderson, 1958 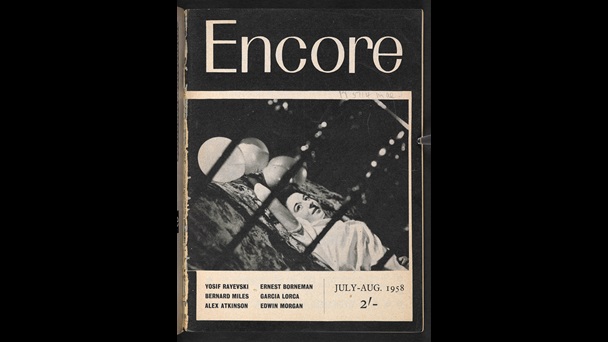 Lindsay Anderson understood the importance of A Taste of Honey as a socially and theatrically inclusive play, calling it a work of ‘complete exhilarating originality’.

Usage terms Lindsay Anderson: © Lindsay Anderson Archive, University of Stirling. Published under a Creative Commons Non-Commercial Licence. Otto Karminski: © Estate of Otto Karminski, The Wildlife Trust of South and West Wales. Except as otherwise permitted by your national copyright laws this material may not be copied or distributed further.

She hated being dubbed an ‘angry young woman’ – she didn't see herself as a female version of John Osborne. Osborne's 1956 play Look Back in Anger presented the British stage with raw, passionate writing, the new ‘kitchen sink drama’, as distinct from those drawing room comedies of manners that Rattigan and Noël Coward had popularised. Delaney wasn't angry – she was restless – her favourite word, and oddly full of optimism. A Taste of Honey isn’t a cynical play; its characters are each different kinds of survivors in a world that throws no lifebelts.

The northern spirit is tough, it is also without self-pity – and that leaves room for humour. A Taste of Honey has none of the bitterness of Osborne, but the laughs aren't the epigrammatic knock-about lines of Joe Orton either. She's deeper than Orton. Delaney had what Alan Bennett put to such good use later: a way of turning the moment from pain to laughter and back again.

In her 1960 documentary made by Ken Russell, Delaney talks about the aliveness of the language all around her in Salford. She loved the market stalls, the banter, the teeming terraced houses spilling onto the streets, a crowded noisy Shakespearean world of pubs and politics and self-belief.

Delaney's self-belief was strong enough for her to send her six-weeks-in-the-writing new play off to Joan Littlewood's Theatre Workshop. Littlewood was a cross between a magician and a tyrant, and she saw at once that Delaney had something special. She worked with her on turning the script draft into the stage version and the production opened at the Theatre Royal, Stratford, London, in 1958.

Manuscript of A Taste of Honey by Shelagh Delaney 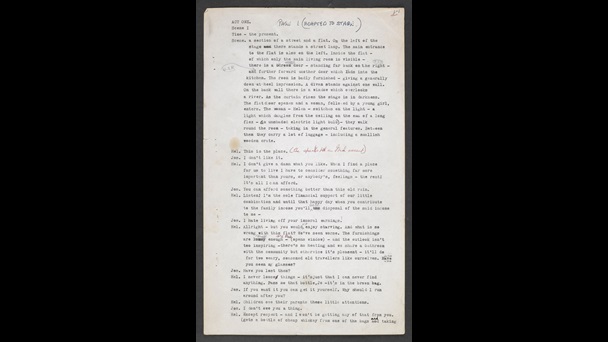 The full manuscript of A Taste of Honey which Shelagh Delaney sent to Joan Littlewood, director of Theatre  Workshop, in March 1958.

A Taste of Honey was a hit and Shelagh Delaney became Britain’s first working-class woman playwright. It was as terrifying a curse as anything in Greek tragedy.

Think about it. She's only just turned 20. She's had little formal education. She's barely been beyond Salford. She doesn't have a family or a background that can support her through the shock of success. She can't be one of the boys. Harold Pinter and Peter Hall could go out drinking with Kenneth Tynan – the most influential theatre critic in the world in the 1950s and 60s. Sam Beckett befriended Pinter. Arthur Miller persuaded Laurence Olivier to ask Osborne to write for him. (The result was The Entertainer, 1957.) Joe Orton was spotted by Kenneth Williams who agreed to star in Loot (1966). Joan Littlewood did her best to help but she couldn’t give Shelagh what gender and class made impossible: a community of equals.

Letters between Shelagh Delaney, Gerry Raffles and the Arts Council, 1958 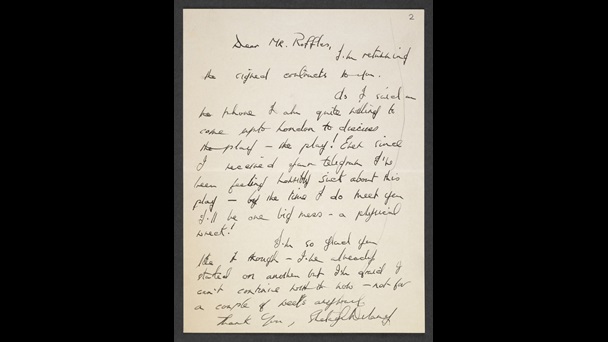 Written during May and June of 1958, these letters provide an insight into Shelagh Delaney’s social background and her early working relationship with Gerry Raffles and Joan Littlewood, as well as showing how her work was judged by the Arts Council.

Nobody works alone. Nothing comes from nothing. A writer needs people who believe in him, people who give him more than a second chance. A writer is on the outside – but he needs to belong. I have used the male pronoun because that entitlement to respect and to be taken seriously, to being part of a club even while you are shooting down the establishment, that is the necessary belonging that men – historically and presently – can take for granted.

In the incredible decade between Look Back in Anger (1956) and Tom Stoppard's Rosencrantz and Guildenstern Are Dead (1966), it's instructive to list the names: Beckett, Bond, Orton, Pinter, Arden, Bennett, Wesker, we could add Peter Cook and Dudley Moore, and there's Shelagh Delaney. The odd one out, not because she's working class, less educated or less talented – but because she's a woman. A roomful of men and one very young woman.

And women don't only have to find the courage to confront the assumptions of the world – we have to confront ourselves. It is easy for self-confidence to become self-sabotage.

After bad reviews for her second play, The Lion in Love, Delaney didn't write again for the stage for 20 years.

In Virginia Woolf's 1929 polemic about the situation of the woman writer, A Room of One’s Own, Woolf speculates what would have happened if Shakespeare had had a sister – just as able as he, and just as determined to succeed on the London Stage.

Woolf describes her – let’s call her Judith – trying to get a job as a stage hand, as an actor, trying to go out drinking with the boys, trying to make friends, to be taken seriously. It’s an all-male environment – she's mistaken for a prostitute, there are no parts she can play, she has a baby, and down she goes.

I look up authoritative references to post-war drama. I read about Delaney's 'one influential play’, her ‘autobiographical style’, as if all writing isn’t autobiographical. I read the patronising down-grades of what she achieved. Who else, in 1958, was writing about an unmarried pregnant teenager, her gay friend, a gentle sexy black sailor, and a single mother? No stereotypes, no judgement – and two fabulous female roles where the women are not adjuncts to the heroics of the make. Delaney said – ‘I applied my imagination to my observation.’ That is what an artist does.

Women are so new to creativity in the arts. Not because women are not creative but because there has been no structure, no space, little education, less encouragement. In the UK we have had the vote for less than 100 years, and still, in 2014, only one Russell Group University, Manchester, has a woman Vice-Chancellor.

Wind back 50 years and for a British criticism of any working-class woman like Shelagh, coming of age on the cusp of the 1960s, the best the world offered her was a teaching post and marriage. Where were her role models for success of any kind – let alone creative success?

Jeanette Winterson is the author of the best-selling memoir Why Be Happy When You Could Be Normal?