The Enigma of Arrival: Migrancy and mutability

The Enigma of Arrival is one of the most celebrated novels by V S Naipaul, the Trinidadian writer who won the Nobel Prize in Literature in 2002. Dr Philip Dickinson explores how this novel draws on the English landscape to reimagine the dislocations and upheavals of the postcolonial condition.

First published in 1987, The Enigma of Arrival is V S Naipaul’s most autobiographical novel, describing his experiences migrating from Trinidad to Britain in the 1950s, his efforts to become a successful writer, and the process of him coming to terms with his postcolonial identity. Upon its publication, Naipaul was criticised by his fellow writers for neglecting the realities of postcolonial experience, in favour of an English, rural, romantic outlook. Salman Rushdie wrote that ‘‘unlike most of his fellow migrants, Naipaul has chosen to inhabit a pastoral England, an England of manor and stream.’’ Derek Walcott wrote that the book expresses a sense of England as ‘not so much [about] setting out to see the world as of turning one’s back on it, of privacy, not adventure.’ The Enigma of Arrival could hardly be more different than the works of Sam Selvon or Andrea Levy, about Caribbean migrants in the UK in urban space. But this book is Naipaul’s unconventional version of a similar story. It is about creating and cultivating a new world out of the ruins of the old, and about the role of literature in this process.

Have we been here before? Structure and narrative techniques

The book is divided into five parts, and only the second and fifth parts are autobiographical in any standard sense. The other sections offer extended, lyrical meditations on the landscape of rural Wiltshire, where Naipaul rents a cottage in the environs of an old manor house. In this setting, he searches for ‘healing,’ for a ‘second life’, and to a degree he finds it. Naipaul is a dislocated, immigrant subject, fractured by the forces of colonial and postcolonial history. But in the mutability of the landscape, he finds consolation: ‘Everything was changing; everything was being renewed or discarded.’ The landscape teaches him to come to terms with change, with flux: to learn ‘not to grieve for it.’

This is an intricately structured novel, which loops from place to place, past to present, present to past. It is non-linear: events and experiences are not narrated in chronological order, but are jumbled up, layered upon one another, sometimes confused. The French literary theorist Gerard Genette distinguishes between repeating narratives and iterative narratives. In repeating narratives, things that happen once are narrated more than once; in iterative narratives, things that happen more than once are narrated only once. This book combines these two techniques, but the reader can rarely be sure which mode is happening when. Have we been here before? Are we in the present or the past? Is the narrator repeating his walk or his thoughts of the day before, or is he re-describing the same experience, the same scene?

This narrative effect expresses the confusion of the narrator when he arrives in this new place. He writes:

The setting felt ancient; the impression was of space, unoccupied land, the beginning of things. There were no houses to be seen, only the wide grassy way, the sky above it, and the wide slopes on either side. (p. 10)

I never ceased to imagine myself a man of those bygone times, climbing up to have this confirmation that all was well with the world. (p. 20)

But the language Naipaul uses undermines the picture he creates: ‘felt’, ‘impression’, ‘imagine myself’. Places are never just themselves. Naipaul arrives in England full of ideas borrowed from his colonial education. When he first arrives in Salisbury, his knowledge of it comes from John Constable’s painting ‘Salisbury Cathedral’, included in his third-standard reader.

When he looks at the landscape, what he sees are ‘emanations’ of literature. He thinks that the ‘exaggeratedly bent’ figure of an ageing peasant farmer comes straight out of Wordsworth, inhabiting some ‘immense, Lake District solitude’. He sees a flock of larks and imagines they are ‘the larks of Tennyson’. Many of these perceptions, though, are fantasies. As Naipaul describes things over and over again, and learns more about the realities behind them, this idyllic world breaks down. He sees industrialised farming, firing ranges, motorways, poverty, pollution and economic decline.

He also comes to recognise that the former wealth of the manor was derived from the depredations of Empire. The counterpoint to the English manor grounds is the Trinidadian sugar plantation on which his grandparents worked under the system of indentured labour. England and Trinidad are linked, not only by Naipaul’s personal biography but by the disavowed history of imperial subjugation. It therefore becomes impossible to look at landscape innocently: it is always infused with history. Even the ‘travel-poster beauty’ of Trinidad – of ‘coconut, sugarcane, bamboo, mango, bougainvillea, poinsettia’ – was a sign of Empire’s cruelty, since these plants and trees were all imported by colonial settlers. 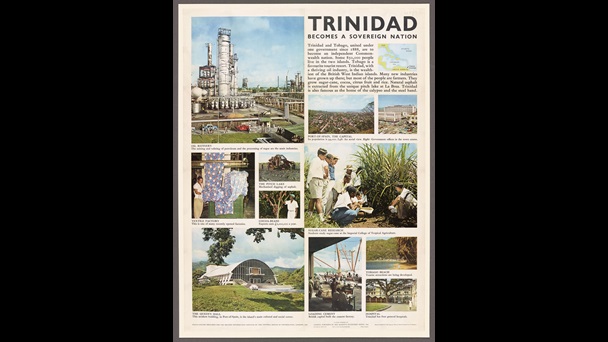 Trinidad and Tobago and Jamaica were the first Caribbean nations to gain independence from Britain in 1962. Intended for a British audience, this poster describes Trinidad’s major industries as well as the growing tourist market.

Time, ‘tenuousness’ and the migratory experience

The title of this novel comes from a 1912 painting by the Italian artist Giorgio de Chirico. The painting provides the cover image for earlier editions of the novel, and inspires a different story that Naipaul conceives but never writes. In this alternative story (outlined in the book), the protagonist arrives in de Chirico’s ancient quayside. He crosses the quay, passing through the gateway on the left-hand side of the image, and enters a bustling, crowded city. He has ‘encounters and adventures’ but gradually senses that he is losing his way, until he feels the urgent need to escape. Somehow, he finds his way back to the deserted ‘quayside of arrival’ – but his ship has gone: ‘The traveller has lived out his life.’

This bleak story is quite unlike the novel in which it is embedded. It is impersonal. It is spare and linear. It could be set anywhere, at any time. It is also a story of time that passes, slips through your fingers. The traveller returns to the quayside too late; his life is over before he has found the place he seeks. But The Enigma of Arrival, in the form in which Naipaul ultimately writes it, develops a contrasting idea of time as flux. This idea of time emerges from his close observation of the rural landscape. And it helps him to understand historical change, the movement of peoples and human death.

My ideas about Jack were wrong. He was not exactly a remnant; he had created his own life, his own world, almost his own continent.

Jack is not ‘rooted’ as the narrator thought at first. He is not a ‘man fitting the landscape’. The word that best describes Jack is instead ‘tenuousness’. The lesson that Jack teaches is to live with the changeability of time, to come to terms with the ‘tenuousness’ of our hold on the world:

He had created a garden on the edge of a swamp and a ruined farmyard; had responded to and found glory in the seasons. All around him was ruin; and all around, in a deeper way, was change, and a reminder of the brevity of the cycles of growth and creation (p. 93)

This is why, on returning from Trinidad, Naipaul decides to write about Jack. Jack’s work of constant recreation is an allegory for the labour of the novelist. It also reflects the larger challenge of postcolonial history: ‘we remade the world for ourselves; every generation does that’ (p. 354). ‘Tenuousness’ is a human condition, but especially it is a migrant condition. Naipaul was part of what he calls the ‘flotsam of Europe’, caught up in the ‘great movement of peoples’ that took place in the wake of decolonisation (p. 141). This strange and tender novel is his testimony to that experience. 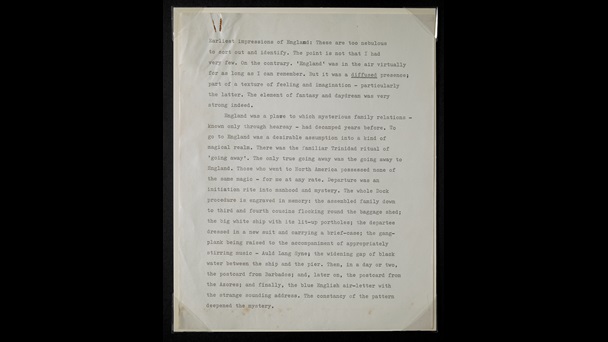 This essay by Shiva Naipaul, who is of Indian-Trinidadian heritage, was written sometime after his arrival in Britain in 1964 and describes the ritual of leave-taking. Assembling at the docks time and again to wave off family members bound for England, Naipaul’s image of the ‘mother country’ became imbued with magic and fantasy.

Usage terms You may not use the material for commercial purposes. Please credit the copyright holder when reusing this work.
Held by© The Estate of Shiva Naipaul