'The man from over the top of the hill': Simon Armitage on Ted Hughes

Ted Hughes believed that poetry had the power to heal and transform, to change perceptions and to alter states. Like many of us, Simon Armitage first encountered Hughes’s poetry at school and was captivated by his ability to distill the complexity of human experience. Here he explores some of Hughes’s themes and interests and the impact he had on his own life and work.

Interestingly, and despite the complex philosophical subjects of his work, it was in the classrooms of Britain where Ted Hughes’s poetry found much of its loyal audience. My own experience as an uninspired and uninspiring secondary school student is one shared by many of the same age group, in the way that Hughes’s poems were the first captivating moments in English literature, and were read and described by teachers who could not hide their enthusiasm for the work or their eagerness to share it. Poems like ‘Wind’, ‘The Bull Moses’, ‘The Horses’ and of course ‘Hawk Roosting’ are not only fastened in the imagination of a whole generation, but for some, like myself, were a kind of Rosetta Stone – the means by which the surrounding world could suddenly be translated, understood and experienced. It is a particular virtue of Hughes’s poetry, and one that he shares with only the very best poets, that clarity and complexity can exist simultaneously, like clear, still water, into which a person can see to a ponderous depth. No one could ever accuse Hughes of simplicity or superficiality, and yet his poems have an immediacy that students, even of a young age, find alluring and true. They draw the reader in, like black holes, whose event horizons are instant, but whose intensities are infinite and utterly absorbing. His Noah-like cataloguing of the animal kingdom is of course a further lure to younger readers. Hughes was a determined educationalist; his book Poetry in the Making, taken from programmes written for the Schools’ Broadcasting Department, is a valuable text for poets of any age, would-be or established, and his books for children represent a sizeable proportion of his output. As a follower of his work, I find it impossible not to see this as strategic rather than accidental or sentimental, and part of Hughes’s ambition to enter the world of intuition, innocence and possibility.

Possibly the poems speak for themselves by now and need no further explanation, or possibly the detailing of poetic intent and achievement can only lead to a narrowing of interpretation rather than the ever-expanding experience that poetry should provide. In any case, such is the range of Hughes’s poetry that a partial synopsis would not serve it well. His profound interest in history and prehistory, his arguments as to the monarchistic structure of the human imagination, his take on nature, his almost obsessional fixation with the First World War, his observations as to the sexual courtship practised by poets through their work, are just a few of the interwoven and tangled threads. They need teasing out carefully, with due process.

But one theme which is worth enlarging on is the issue of Hughes’s fascination with the supernatural and the paranormal. From an early age, Hughes demonstrated an uncommon interest in all things other-worldly, an interest furthered by his choice of studies at university and his background reading. Anyone who spent any time with him will have experienced this at first hand; his conversations were full of the weird and wonderful, from poltergeists to pixies, from witchcraft to Ouija boards, from astrology to apparitions, from dousing to divination and so on. It would be easy to pass this off as so much hocus-pocus, serving no literary purpose other than providing reams of subject matter and bumping up the poet’s credentials as a latter-day witchdoctor. But Hughes wasn't someone who pursued interests casually or without reason, and his dabblings in the occult were, to him, nothing less than an essential part of his task. Hughes aligned himself with the ancient role of the poet. He looked even further than the metaphysical potential of poetry to a kind of writing that had the power to heal and transform, to change perceptions and to alter states. He saw beyond the power to communicate, aiming instead for a kind of ‘contact’, or sensual comprehension, where poem and reader took possession of each other through the medium of poetry, or through the poet as medium. And he saw language as one of the least understood powers in the universe, ranking alongside electrical, gravitational, atomic and magnetic energy as a force to be manipulated and controlled. His view of the poet as shaman was one he took seriously, and many of his poems are unembarrassed shamanic flights of fancy into the spirit world, excursions to the ‘other side’, where he might properly inhabit the nature of his subject, be it animal, vegetable or mineral, be it jaguar, snowdrop or rocky crag. He had a clear vision of his duties, and one of those duties was to convince his audience. Hughes was well aware of the potency and authority of his speaking voice, not to mention his personality, and put these attributes to good use. It was all part of the job. People had to believe in him. The word magic these days might conjure up images of a man pulling rabbits from a top hat or producing cards from under his cuffs. But Hughes’s magic was his writing. He made little black marks against clean white pages, marks that somehow detailed the absolute matter and manner of a bird or an eel or a foal or a wolf or a bear. At later dates and in distant locations, when we looked at those marks, when we read the poems, those creatures came to life. Out of nothing. Has any other magician ever pulled off a greater trick? 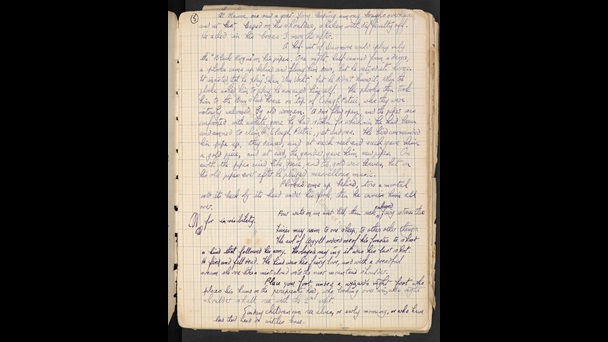 This notebook, kept by Ted Hughes throughout much of his life, reveals the poet’s deep interest in folklore, myth and supernatural tales. On this page Hughes has recorded several traditional tales about magical creatures including phookas (or púca), fairies and elves.

Hughes, for me, was ‘the man from over the top of the hill’, from the next Yorkshire valley, and his poems made me want to read. Later, it was homesickness that drew me back to his work, and by that time his poems were making me want to write. I think we shared a nostalgia for the same part of the world, even if that patch of the planet held a different significance for us.

The first time I saw him was on a school trip to Hebden Bridge, where he read his poems in a moth-eaten cinema, sitting on a creaking wooden chair in front of a threadbare velvet curtain. Over the next 20 years I met him about a dozen times, in some very obscure circumstances and peculiar company. We had certain common interests, but our meetings were always lopsided, by definition, because one of my interests was him. On the last occasion, I sat and listened as he made his last recorded reading, the poems from Tales from Ovid that were taped at his home and broadcast on BBC Radio 4. Hughes lowered his head to the microphone, and like the storyteller he truly was, told the whole story, beginning to end, with barely a fluff. Those cassettes are now available to all on CD, but for all their slick packaging and promotion, they have for me the quality of a rare bootleg. Anyone listening carefully will be able to hear not just Hughes’s voice at its ghostly, intimate best, but also the sounds of the Devon landscape going on around him. At one point there's a tractor. A little later, church bells. And eventually, right on cue, a crow comes winging its way through the stereo, in one ear and out through the other. It’s a compelling testament to the work of a poet whose great exploit was to bring the inner workings of the human brain out into the wide world, and at the same time draw the outside world into the mind.