Ballet in Paris in the early 20th century

Jane Pritchard discusses the ballet companies and their artists who were active in Paris in the early 20th century.

The early 20th century was a time of transition and change for ballet in Paris. Having led the way, particularly with the development of the Romantic ballet in the mid-19th century, by the end of the century ballet had become a secondary art, incorporated into opera or presented as music hall acts. It had become formulaic, in need of reformation, and apart from Mme Mariquita – a dancer and choreographer who was active at various Parisian theatres from the 1840s until 1920 – the leading choreographers had died leaving a vacuum to be filled by the Ballets Russes. At the same time, Paris was fascinated by Russian culture and developing a taste for Russian music and art, while Russia was dependent on France to modernise its industry and communications.

Sergei Diaghilev and the formation of the Ballets Russes

Sergei Diaghilev (1873–1929) had promoted European and new Russian art in St Petersburg through exhibitions and concerts and spent a brief spell with the Imperial theatres. However, he recognised the challenges he faced in a country embroiled with war against Japan and increasing revolutionary activity at home, so he turned to Paris where he became the most effective of the impressarios promoting Russian arts in the French capital.

From the Saison Russe of 1909 onwards Diaghilev included ballet in his programmes, attracting such acclaim that within two years he established the Ballets Russes company to tour internationally. The Ballets Russes contributed to ballet becoming a stand-alone art, no longer a subsidiary of opera or popular mixed programmes. It restored the male dancer to a central position that would be maintained throughout the 20th century and the greatest composers and artists were persuaded to collaborate with the company.

Stravinsky and the Ballets Russes

Diaghilev commissioned original scores for more than half his productions while also contributing to the rediscovery of scores from earlier epochs; Pulcinella, for example, featured Italian music of the 18th century (thought at the time to be composed by Giovanni Battista Pergolesi) revitalised by Igor Stravinsky. 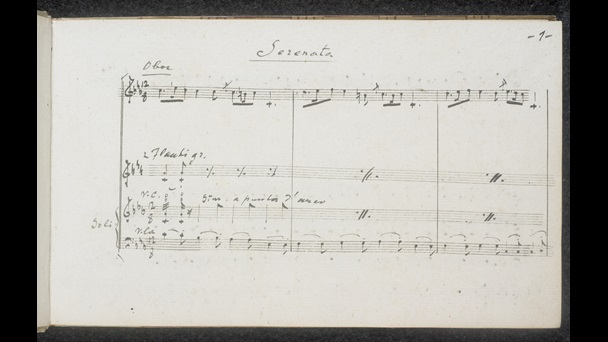 Stravinsky’s notebook for his ballet Pulcinella is believed to have been given by him to Picasso in June 1920.

Usage terms Reproduced by kind permission of the publishers: Boosey & Hawkes Music Publishers Ltd. Except as otherwise permitted under your national copyright law this material may not be copied or distributed further.
Held by© Boosey & Hawkes

https://sounds.bl.uk/resources/Music-since-1900/Stravinsky%20Pulcinella%20-%20Serenata.mp3
Update Required To play the media you will need to either update your browser to a recent version or update your Flash plugin.

The Ballets Russes developed from the Russian Imperial Ballet tradition a combination of the French and virtuosic Italian schools, but broke away from the dependency on mime and spectacular processions to focus on narrative through dance. For the 1909 season, Diaghilev asked choreographer Mikhail Fokine to revitalise existing short ballets but in 1910 they started creating new works. The first, The Firebird, was based on Russian folk tales with Fokine's choreography tailored to Stravinsky's score and burst upon the stage of the Paris Opera making Stravinsky internationally famous overnight. 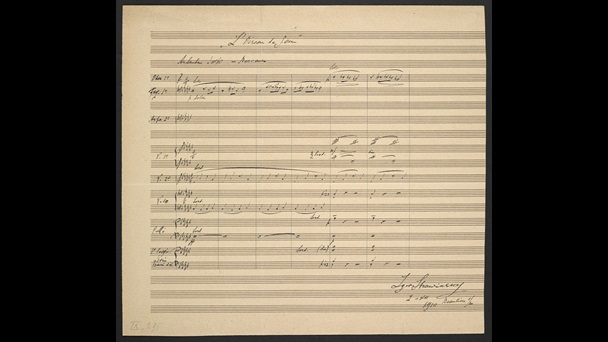 The Firebird (L’Oiseau de Feu) is the work that made Stravinsky famous and remains today one of his most popular works.

Usage terms © Copyright Schott Music GmbH & Co. KG and Chester Music Ltd, London. Reproduced by permission. All rights reserved. This material may only be viewed or copied for private use/reference and may not be published or further distributed.
Held by© Schott

https://sounds.bl.uk/resources/Music-since-1900/Stravinsky%20Firebird%20Lullaby.mp3
Update Required To play the media you will need to either update your browser to a recent version or update your Flash plugin.

The artists, dancers and choreographers of the Ballets Russes

In addition to Stravinsky the great pre-World War I discoveries were designer Leon Bakst and dancer-choreographer Vaslav Nijinsky. The bejewelled, exotic designs of Bakst impacted on fashion and interior decoration as well as the stage. His combinations of greens and blues, reds and oranges for erotic scenes of the East and cool elegant Greek tunics influenced designers throughout the 20th century. But the colour pallet changed from 1914 with the more acidic tones of designs by Moscow-based Natalia Goncharova and Mikhail Larionov. The art nouveau swirls gave way to a more constructivist and cubist style as increasingly Diaghilev turned to Western artists, commissioning designs from Pablo Picasso, Andre Derain and Henri Matisse.

Vaslav Nijinsky was a charismatic virtuoso dancer who had the ability to transform his appearance for each role: androgynous as the Rose in Le Spectre de la rose (1911), stiff and forlorn as Petrouchka (1911), animalistic as the Golden Slave in Scheherazade (1910) and the Faun (1912). It was L'après-midi d'un faune that launched his choreographic career and as a choreographer he sought a different movement vocabulary for each work. The Faun was inspired by two-dimensional Attic vase painting while for the ground-breaking Rite of Spring (Le Sacre du printemps, 1913) the body was turned-in, weighty, 'unballetic'. It was the movement as well as Stravinsky's startling score and Nicholas Roerich's colourful, neo-fauvist designs that made the short-lived original Sacre controversial. 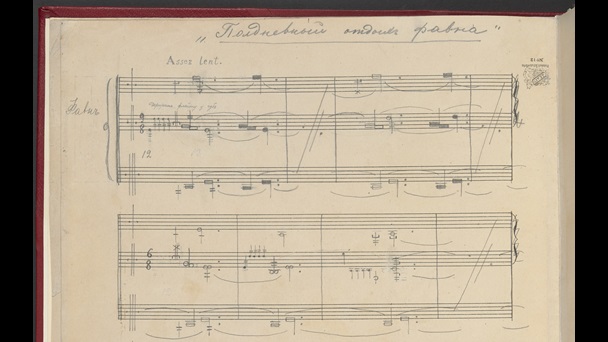 Nijinsky’s choreographic score to the ballet L’après-midi d’un faune is written in a dance notation system that he himself developed.

https://sounds.bl.uk/resources/Music-since-1900/Debussy%20Prelude%20a%20lapres%20midi.mp3
Update Required To play the media you will need to either update your browser to a recent version or update your Flash plugin.

From 1915 Leonide Massine developed into the Ballets Russes company's choreographer focusing on character work and he was followed by Nijinsky's sister, Bronislava, and George Balanchine. These 1920s choreographers returned to a more academic vocabulary but both extended it in new ways reflected in the stabbing pointe work in Nijinska's Les Noces and Balanchine's sinking turns en pointe in La Chatte and Apollon Musagette.

https://sounds.bl.uk/resources/Music-since-1900/Stravinsky%20Les%20Noces%20Scene%20Two.mp3
Update Required To play the media you will need to either update your browser to a recent version or update your Flash plugin.

Other ballet companies in Paris

The Ballets Russes travelled widely. During the War it performed in neutral areas: the USA, Spain, and Southern Italy, returning to London, Paris, and Monte Carlo at its end. Monte Carlo became its creative base, London enabled the company to present long seasons, but Paris was favoured for first nights and the city's critical reaction. But the company faced competition. Under the management of Jacques Rouche the Opéra Ballet was revitalised with collaborations on the Diaghilevian model and Diaghilev’s choreographers were invited to mount productions there. The Ballets Suédois, a break-away group from the Royal Swedish Ballet under choreographer Jean Borlin, was based at the Théâtre des Champs Elysées. Their productions drew on Swedish folk culture alongside modern ballets working with interesting artist-designers and leading composers ­– including Jean Hugo and the musicians of Les Six for Les Mariés de la Tour Eiffel. As the Ballets Suédois wound down Comte Etienne de Beaumont created Soirée de Paris for the 1925 season. With Massine as choreographer, and Picasso, Derain and Hugo among the designers, Diaghilev regarded the company as a challenge to his operation.

https://sounds.bl.uk/resources/Music-since-1900/Milhaud%20Marche%20nuptiale.mp3
Update Required To play the media you will need to either update your browser to a recent version or update your Flash plugin.

He also felt alarmingly challenged by the ballet company established by Ida Rubinstein in 1928. Rubinstein was a strikingly tall, slim, Russian Jewish heiress who became a Parisian celebrity miming the roles of Cleopatra and Zobeide in Scheherazade for Diaghilev in 1909 and 1910. She commissioned a series of productions in which to star and in 1928 fancied herself as a ballerina.  The weakness of her ballets was her insistence on taking the lead but scores she commissioned and presented were of the highest order, from Stravinsky's Le Baiser de la fée to Maurice Ravel's Boléro. Her productions were choreographed by Massine and Nijinska and although the company did not survive long these choreographers reworked these ballets for groups in the 1930s. 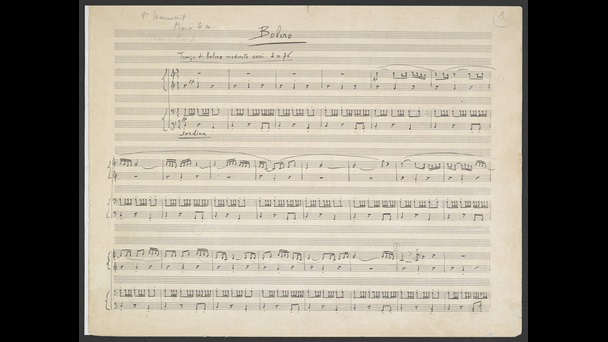 This manuscript of Ravel’s arrangement of his Bolero for piano duet was a working document used by the editor and engraver to prepare the first printed edition.

For all the ballet companies the most lasting element was the musical scores which continue to attract choreographers. The Russian-French collaborative process between choreographers, composers and designers to create masterworks remains an ideal to be aspired to. While Diaghilev's death in 1929 caused a crisis in the world of ballet, the Opéra Ballet led by Diaghilev's star dancer Serge Lifar was ready to resume its pivotal role in the capital and new generations of companies operating under titles including Ballets Russes kept ballet alive in the 1930s.