Fredrick Delius was one of the first European composers to be influenced by African American music. Though he only visited the United States twice, the country had an enormous effect upon his life and musical career. In 1884, aged 22, Delius travelled to Jacksonville, Florida, to manage a citrus plantation, Solana Grove, leased by his father. 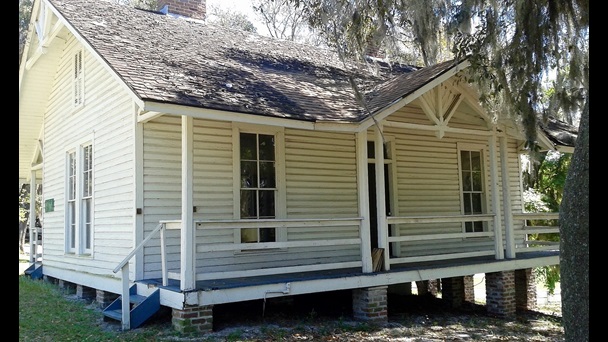 Except as otherwise permitted under your national copyright law this material may not be copied or distributed further.

In 1885 he left the plantation and moved to Danville, Virginia, before returning to Europe in June 1886 (where he began studies in Leipzig later that autumn). His second visit took place in early 1897, in company with two friends from Paris, and he gave concerts and visited his plantation before returning to the French capital in May. Though he never returned to the US, America figured significantly in some of Delius’s most remarkable musical works, and it has been a prominent part of his critical reception.

Minstrel shows and other performances by visiting African American ensembles were a hugely popular form of entertainment in 19th-century England. A number of minstrel groups performed in Bradford during Delius’s childhood, and Delius’s sister, Clare, remembered attending a minstrel show. The Christy Minstrels first performed in Bradford in 1863, and returned on a number of occasions. The Jubilee Fisk Singers appeared in 1873 and a group called Haverly’s Mastodon Minstrels in 1882.[1] Minstrel shows included so-called ‘plantation songs’, crudely idealized depictions of working life on cotton plantations in the American South, as well as other stereotyped (and often highly racialised) musical sketches and dialogues, and usually concluded with a walk-round or grand finale, sung by the whole ensemble. Elements of music from minstrel shows can be heard in Delius’s later work, for instance Appalachia and his operas Koanga and The Magic Fountain. Usage terms © The Delius Trust. Reproduced with permission.
Except as otherwise permitted by your national copyright law, this material may not be copied or distributed further.
Held by© Delius Trust

Solana Grove was located on the shore of the St John’s River, 40 miles downstream from the port city of Jacksonville. At the time of Delius’s arrival, Jacksonville was a popular winter holiday destination, with a number of fine hotels and amenities including the Park Opera House, which opened in February 1884. 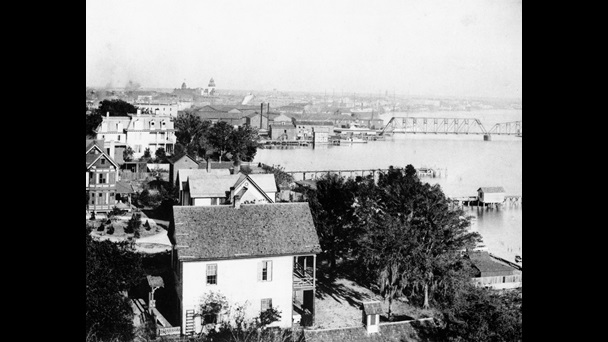 Photograph of Jacksonville Harbour, Florida, in 1894, taken from a house in Riverside (1894)


Delius took part in a barbershop quartet concert at the St James Hotel on 20 November 1884, and he received his first formal musical instruction from Thomas Ward, organist at one of the city’s churches. Delius later wrote about the experience of sitting on his veranda at Solana Grove and listening to the songs of his plantation workers. There is no evidence, however, that he notated any of the tunes directly, and he sold his plantation to the German conductor Hans Haym in 1912. 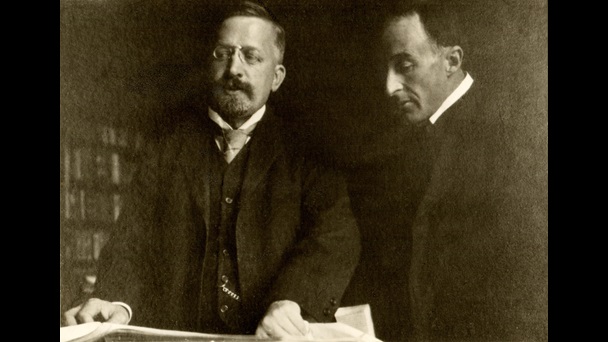 Photograph of Hans Haym and Frederick Delius, taken at Elberfeld, Germany, in 1909

The earliest work to refer to Delius’s impressions of the United States is the Florida Suite for orchestra, which he wrote at the end of his studies at the Leipzig Conservatoire in 1887. The work is in four movements with programmatic titles: ‘Daybreak’; ‘By the River’; ‘Sunset’; and ‘At Night’. Delius wrote two operas that have explicitly American topics. The Magic Fountain (1894-5) recounts the story of the Spanish conquistador Ponce de Léon’s search for the mythical Fountain of Youth and his first encounter with indigenous Floridian groups. In Delius’s opera, the hero is renamed Solano, after his plantation by the St John’s River. The libretto was written by Jutta Bell, a member of Delius’s Paris circle and previously one of his neighbours in Florida. 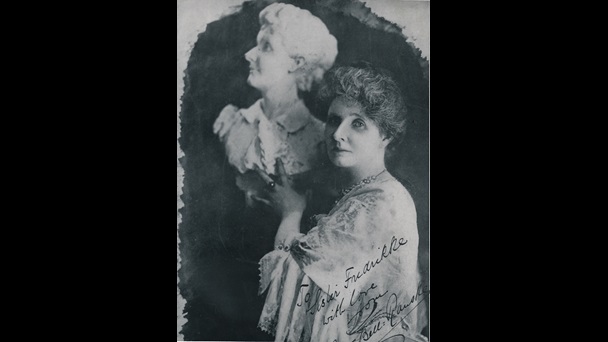 Photograph of Jutta Bell-Ranske, who worked with Fredrick Delius on libretti for his operas The magic fountain and Koanga


The second opera, Koanga (1895-7), is based on George Washington Cable’s novel The Grandissimes, set in New Orleans and the Louisiana bayou, and revolves around the ill-fated love between Palmyra and an enslaved African prince, from whom the opera takes its name. The opera was the source for a still-popular orchestral arrangement, La Calinda, which appears in the earliest sketches of the opera and in the first movement of the Florida Suite.

00:00
9:24
Update Required - To play the media you will need to either update your browser to a recent version or update your {link}


Delius composed two independent versions of his orchestral rhapsody Appalachia. The first, unpublished version (1896) quotes a number of popular American melodies including ‘Yankee Doodle’. The second (1902) is a large-scale set of variations that concludes with a choral walk-round or finale with baritone soloist based on words adapted from Benjamin Hanby’s ballad ‘Darling Nellie Gray’.

Delius’s final work explicitly inspired by America, Sea Drift (1906), was a setting of lines from Walt Whitman’s poem ‘Out of the Cradle Endlessly Rocking’, from his anthology Leaves of Grass. Whitman’s poetry proved particularly popular with British composers, especially Vaughan Williams. Delius chose to focus on a text that deals intensively with issues of abandonment and loss.

Although none of Delius’s later works evoke America directly, he did quote a theme from his two early American operas, The Magic Fountain and Koanga, in the middle section of the slow movement of his String Quartet, ‘Late Swallows’ (1916). The reason for the allusion remains unknown.

It is unclear whether Delius ever quoted any actual African American melodies in his music. Scholars have nevertheless identified many instances where Delius appears to have borrowed particular African American musical idioms—these include specific modal inflections (‘blue notes’), melodic gestures, or vernacular idioms. In his lifetime, too, the notion of authenticity was important to the European reception of his American works. In an early performance of the 1902 Appalachia under the baton of Thomas Beecham, the concert programme highlighted the use of a 'genuine slave-song from the Mississippi', although it is likely that Delius composed the melody himself. Extract from the programme for a concert at the Queen's Hall, London, in 1911, including reference to the use of “a genuine slave song from the Mississipi' in Frederick Delius Appalachia (p. 3)

Usage terms © No known copyright. Images supplied by, and reproduced with permission of, the University of Sheffield Library.


Though his biography poses some difficult questions of race, class, and representation, the influence of African American music on Delius’s work remains one of his most striking and characteristic legacies.