Joanna Bullivant explores how Delius’s compositions were brought to life by various interpreters. Did he give his performers enough information and how important are the contributions made by the famous musicians with whom he worked? 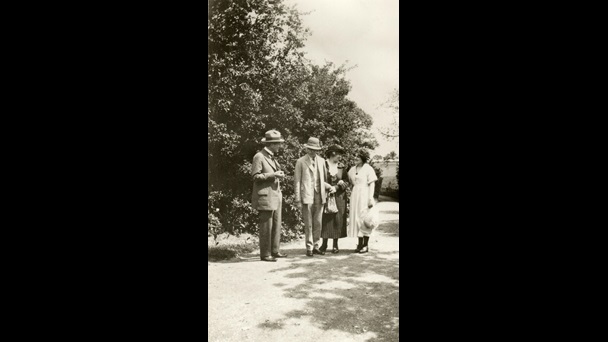 All written music requires performers to make decisions about how to perform the notes as written down by the composer. Many early music notations are famously under-prescriptive, either assuming performers would adopt particular practices, or leaving many choices undetermined. Even in more modern repertoire, however, composers have varied in how much they choose to convey to the performer. Edward Elgar gave very detailed performance indications regarding phrasing, dynamics, and instrumental techniques. Delius, in contrast, has long been accused of laxity bordering on indifference to the performance of his works. His most influential interpreter, Beecham, had much to say on this theme, both in interviews and writing.

00:00
00:50
Update Required - To play the media you will need to either update your browser to a recent version or update your {link}

Quoting an unidentified source, Beecham wrote of Delius: ‘It is well known that although he has the ability to inscribe on paper a combination of notes capable of yielding delightful effects if adequately rendered, he is wholly unable to instruct his interpreters how to obtain the desired results’.[1] Consequently, in Beecham’s view, Delius’s music had to be carefully and rigorously edited prior to performance. His own efforts in this direction – as one of Delius’s most acclaimed interpreters and the founding editor of the Delius Collected Edition – were strongly endorsed by the viola player Bernard Shore, who remarked that ‘Delius’s music was written for one man only to create […] to play unedited Delius […] is like living in an empty house’.[2]

How true are Beecham’s claims that Delius provided inadequate information regarding such matters as expression, dynamics and phrasing? The manuscript of the slow movement of the original version of the String Quartet (1916), ‘Late Swallows’, provides an example of unedited Delius. 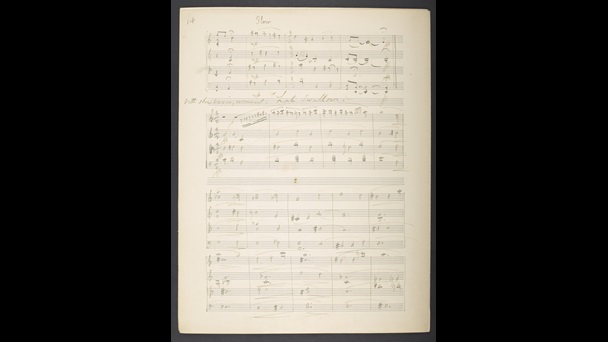 Manuscript of 'Late Swallows': an example of unedited Delius

The score as Delius wrote it presents several problems for performers. In the opening bars for the first violin, Delius writes a long slur. In writing for strings, this usually indicates that the notes in the slur should be performed without changing bow, but the length of the passage here makes that impossible. Similarly, many of the slurred chords cannot be played cleanly. Performers therefore have to adapt what Delius has written to match the technical limitations of their instruments.

00:00
8:43
Update Required - To play the media you will need to either update your browser to a recent version or update your {link}

Editorial changes were not limited to meeting the practical capabilities of certain instruments. Beecham felt that Delius also gave inadequate indications of phrasing and expression (whether a passage should be loud or soft, played smoothly or not etc). Consequently, his own copies of first editions of Delius’s scores are peppered with his famous blue pencil markings, as his score of Brigg Fair reveals. These give many indications of, for example crescendo (getting louder) and diminuendo (getting quieter) not found in the original. 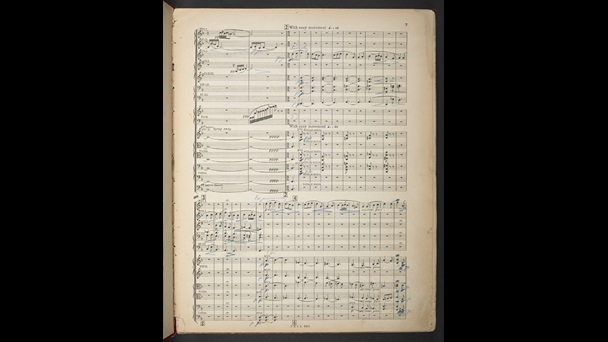 https://sounds.bl.uk/resources/discovering-music/BriggFairBeecham.mp3
00:00
1:09
Update Required - To play the media you will need to either update your browser to a recent version or update your {link}

Extract from Frederick Delius’s Brigg Fair, conducted by Sir Thomas Beecham. According to Eric Fenby, this recording was heard by the composer himself, who remarked “That is how I want my music played.”

These give many indications of, for example crescendo (getting louder) and diminuendo (getting quieter) not found in the original.

While for a variety of performers, making specific additions to Delius’s scores was important, many have also noted the impossibility of describing the right way to perform Delius. We can see from Beatrice Harrison’s  copy of the Cello Sonata written for her that she added numerous annotations of dynamic markings, bowings, and fingerings to aid her performance: 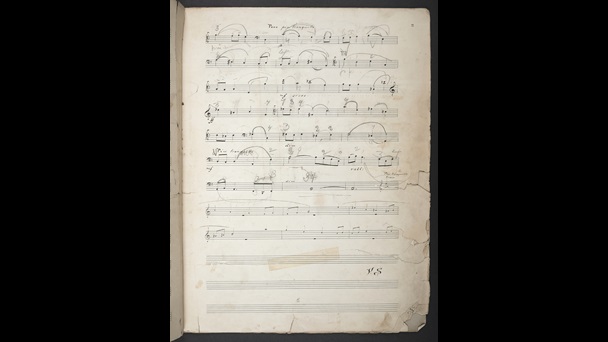 Beatrice Harrison's copy of Frederick Delius' Cello Sonata, with numerous annotations to aid her performance of the work

https://sounds.bl.uk/resources/discovering-music/DeliusCelloSonataHarrison1926.mp3
00:00
00:45
Update Required - To play the media you will need to either update your browser to a recent version or update your {link}

Beatrice’s sister, the violinist May Harrison, argued that these kind of acts of interpretation did not get to the heart of what it meant to perform this music, because ‘To play Delius’s music is a kind of instinct—a natural impulse—and he depended more on the instinctive musical feeling of his exponents possibly than any other composer. He once told me that music to him was purely emotional—a series of passing dreams—wherein intellect and actual scholarship should play no part’.[3] 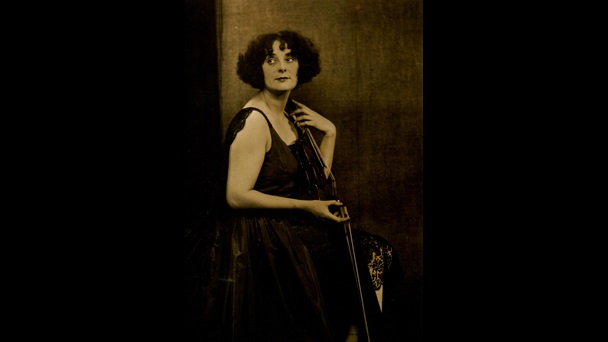 May Harrison’s description chimes with a longstanding image of Delius as an impressionistic composer, more concerned with creating moods and images than musical structure or precision. Yet more recent interpreters, while agreeing that Delius sought to create such musical impressions, have disagreed with the notion that it is all a matter for the performer’s musical instinct. Mark Elder, for instance, conductor of the Hallé Orchestra, has argued that Sea Drift is ‘so much more evocative’ when played without the distinctive dynamic swells that Beecham had added to Delius’s original score.[4] Charles Mackerras, similarly, believed that Beecham did not always capture the right sense of tempo and flexibility in Delius:

I believe that finding the right freedom is really the key to most Delius compositions—finding the right degree of flexibility, and getting a feeling of improvisation. […] [Beecham] had such confidence in his own views—‘Oh, well, Frederick had no idea…’, which was, in a way, condescending towards Delius, even though he was his greatest ‘fan’—and perhaps one should be a bit more serious about what were probably the composer’s wishes.[5]

Indeed, after his first performances of Sea Drift in 1909, Beecham wrote to Delius that they had gone ‘stunningly’, yet despite much critical approval, this opinion was not universally shared. Some reviews criticized Beecham personally. The Times wrote of the ‘atmospheric vagueness’ of the work, while the Musical Times, lambasting Delius rather than Beecham, spoke of the ‘dullness and labouredness’ of the music.[6] It is worth noting too that Sea Drift had been conducted previously by Henry Wood in Sheffield. Delius told his wife Jelka privately that ‘the performance went off very well […] although [Wood] did not always take the right Tempi – sometimes too slow and then too fast’.

Disputes over the Piano Concerto

The specificity of Delius’s criticisms of Wood challenge the notion that Delius was vague or indifferent regarding the performance of his work, even where the desired effect was evocative or improvisatory. This is further demonstrated by the unhappy outcome of his collaboration with the pianist Theodor Szántó. In 1908, Szántó had, with Delius’s permission, been at work on the composer’s Piano Concerto with a view to creating a more virtuosic piano part. When he saw Szántó’s efforts, Delius made detailed criticisms regarding places where he felt that the changes would weaken the overall effect: 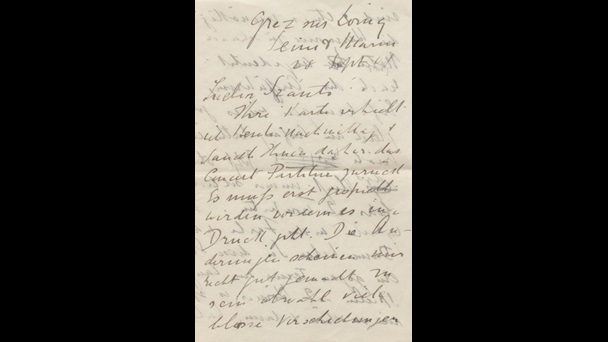 He also complained to his publisher, prompting an angry retort that ‘you should be grateful to the gentleman [Szántó] for taking the trouble without any recompense to make an otherwise impossible work for piano fit for performance’.[7] Still deeply unhappy with what he viewed as the transformation of his work into a ‘piano showpiece with orchestral accompaniment’, Delius refused to sanction Szántó’s version.[8] The dispute over the playability of the work notwithstanding, the episode indicates Delius’s concern with the impact of his works in performance at a detailed level. In a corrected version of the 1907 first printed addition, the numerous pastings-over and corrections make palpable Delius’s efforts to perfect the work. 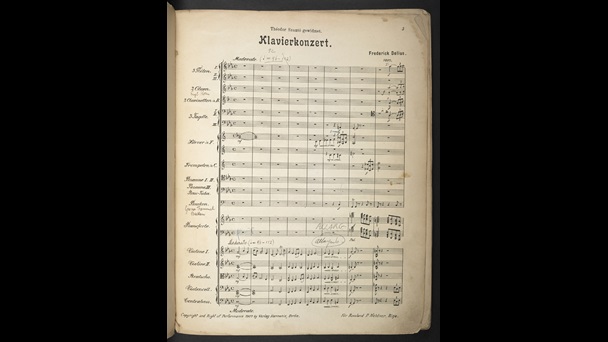 Using Delius’s manuscripts, correspondence, and performers’ copies, we can see that the path from the composer’s original score to a complete performance has often been complex. The disputes among conductors and performers indicate not so much that there is a single, right way to play Delius if we can only find it, but that musical performances and opinions will vary and be contested. Yet achieving effective performances continues to matter to musicians who play Delius. In his letters and manuscripts and the contributions of others presented here, we have a rich source of information on which to base new interpretations.


The text in this article is available under the Creative Commons License.