Eric Saylor surveys the social contexts and musical impact of the folksong revival in the early 20th century.

The late Victorian revival of interest in English folk songs arose partly – and ironically – in response to the economic and social strains placed upon rural England by its urban centres.

As the 20th century dawned, traditional hallmarks of rural culture were threatened as the population of countryside dwindled: those who had not already migrated to the cities for work were aging and dying at an increasingly rapid pace. However, a variety of social and aesthetic developments – including Morrisonian socialism, the Arts and Crafts Movement, and the growth of various preservationist societies – encouraged a large-scale reassessment of rural English culture.

The traditional music of the English countryside came in for special attention by ethnographers and musicians alike, who extolled its artistic and social value. '[F]olksong was held up as a cultural artifact common to the experience of all English men and women; its dissemination throughout society as a whole would thus serve as a reminder of a shared cultural heritage and help forge connections between social classes.'[1]

With that said, folk song collectors disagreed on how this could best be achieved. One faction, which included figures such as Lucy Broadwood (1858–1929) and Frank Kidson (1855–1926), emphasised the importance of scholarly accuracy and the authentication of tunes’ origins by collectors. They claimed that folk songs were valuable in their own right as musical creations and cultural artefacts of rural English life, and deserved to be treated seriously as part of the nation’s artistic heritage.

Accordingly, they shared their findings in specialised publications like the Journal of the Folk-Song Society, or via compilations such as Kidson’s Traditional Tunes (1891) or English County Songs (1893), edited by Broadwood and J. A. Fuller Maitland. Importantly, however, their approach was not narrowly nationalistic, as many believed that their practices could (and should) be instituted anywhere, not just in Britain.

Other collectors, led by Cecil Sharp (1859–1924), argued that time was of the essence in preserving traditional English country songs – since their practitioners were aging and dying at an increasingly rapid rate – and that the songs should be promoted and disseminated as widely as possible: in public lectures, printed editions, even as part of primary school curricula. The thoroughness and range of their fieldwork was matched only by their zeal in proclaiming the redemptive power of folksong.

For Sharp and his sympathisers, folksong was a means of countering what was widely perceived as the physical and moral decay of England’s urban masses by reintroducing them to the honest, healthy, and above all, authentically 'English' songs that were their birthright. Such claims were, of course, wildly overstated, and privileged the social and cultural values of the educated middle classes over those of the songs’ creators.

Some collectors maintained a foot in both camps, including Ralph Vaughan Williams (1872–1958). Although a close friend of Sharp (and despite agreeing with many of his colleague’s aims), Vaughan Williams was also a historian who respected Broadwood’s methodical approach to identifying and codifying songs.

Between 1903 and 1913, he transcribed over 800 folk songs (mostly from the southeastern counties and East Anglia), more than a third of them before 1905. As a composer, however, 'the primary attraction of folksong for Vaughan Williams was the musical coherence and structural tautness that he perceived within it', qualities that affected both his approach to collecting and his later compositions.[2] 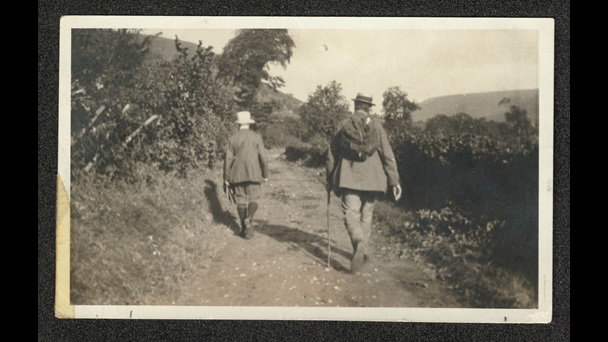 Vaughan Williams and Holst shared a lifelong friendship. These photos were taken during a walk they took together in the Malvern Hills.

For example, collectors of his generation have been criticised by later scholars for allegedly “idealising” the songs that they collected – that is, engaging in practices that misrepresented both the music and the singers. This might involve limiting their surveys to the most isolated rural locales; recording the music but not details about the performer or setting; discarding verses that either derived from printed ballad-sheets or deviated from contemporary standards of moral decency; or editing transcriptions so as to ensure their conformity to more regular models.

Vaughan Williams was just as inconsistent as many of his contemporaries in his collecting methods; however, we can see evidence of his struggle to balance a faithful record of individual performances against his own musical taste and experience.

One particularly good illustration of this is visible in his transcription of 'The Cruel Father and the Affectionate Lover', one of the very first songs he ever collected (during a visit to Ingrave, Essex, in 1903). There are a few uncertainties within this transcription, such as the question mark beneath the A quaver in bar six.

Of particular interest, however, are the F quavers at the end of bar 4, below which he wrote two quaver Cs in parentheses. Theoretically, those Cs are the correct notes, because they repeat the pickups to the first phrase of the piece (bb. 1–2), which repeats identically in bb. 5–6. But the asterisk following those parenthetical Cs refers to a comment at the bottom of the page ('Note: * He sang F decidedly').

It was that singer’s realisation – not the idealised, 'correct' one – that Vaughan Williams chose to publish in the Journal of the Folk-Song Society. (A similar conundrum occurred at the end of the piece: note the parentheses around the B and A quavers in bar 7, suggesting a more plausible approach to the final cadence.) 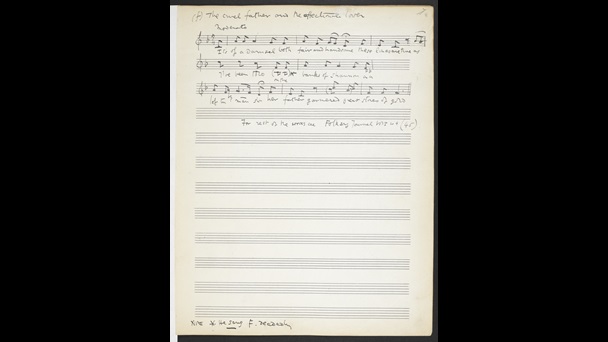 This manuscript contains a collection of folk tunes transcribed by Ralph Vaughan Williams on his forays to rural villages in England.

Except as otherwise permitted under your national copyright law this material may not be copied or distributed further.

Collectors such as Sharp were less tolerant of such performative irregularities, preferring to establish an 'authentic' version from all of the variants of a song that existed, which could then be faithfully reproduced. However, Vaughan Williams understood that folksong was a living and adaptive tradition, the meaning and significance of which changed over time for practitioner and listener alike. He said as much in a letter to Sharp in 1907: 'If the folksong has nothing to say to us as we are now without a sham return to an imaginary (probably quite illusory) arcadia of several centuries ago… then I would burn all the collections I could lay hands on and their singers with them.'[3]

Given this attitude, it should come as little surprise to find that Vaughan Williams sought opportunities to perform traditional tunes in new contexts. One of the most familiar examples is 'The Ploughboy’s Dream', better known to generations of Christmas carolers as 'O Little Town of Bethlehem'. This is one of several folk tune arrangements that Vaughan Williams included in The English Hymnal (1906), for which he served as music editor. It goes by FOREST GREEN in that collection, named after the Surrey village that was home to one Mr. Garman, the labourer from whom Vaughan Williams learned the song.

As he noted on the manuscript, 'Mr. Garman used to sing to the Rev. John Broadwood [father of Lucy] who “would give half-a-crown to hear The Ploughboy’s Dream”.' The version in The English Hymnal obviously differs from the one that Mr. Garman sang: not only was the original text replaced, but Vaughan Williams arranged the monophonic song in a four-part setting, with the tune itself placed in the soprano. 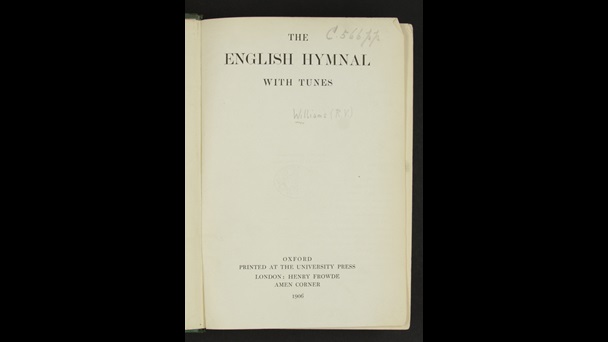 Ralph Vaughan Williams selected and edited the music for the hymnbook The English Hymnal, which was conceived and overseen by Percy Dearmer.

Usage terms CRANHAM (Gustav Holst), FOREST GREEN (Vaughan Williams), YORK and SINE NOMINE from The English Hymnal by permission of Oxford University Press. All rights reserved. Except as otherwise permitted under your national copyright law this material may not be copied or distributed further.
Held by© Oxford University Press

Such adaptations are found not just in hymnals, but in arrangements for piano (with and without voice), chorus, wind band, and orchestra. Gustav Holst’s A Somerset Rhapsody (1910) exemplifies the latter practice, presenting various settings of three different folk songs ('The Sheep-Shearing Song', 'High Germany', and 'The True Lover’s Farewell') over the course of the work.

Holst’s realisation largely left the songs’ vernacular context behind, situating them instead within the academic and cultivated practices that formed the backdrop for his own professional training. Vaughan Williams engaged in similar practices over the course of his career, sometimes setting the same folk song in multiple performance contexts.

One example can be heard in a May Day Song which he collected in the Cambridgeshire village of Fowlmere in 1907. Vaughan Williams made two arrangements of it: the first for chorus, which was employed in one of the scenes from the spectacular Pageant of London (1911), and the second as a solo aria for John the Butcher, the antagonist in the opera Hugh the Drover (1924). This second arrangement is set a semitone below the original version (in the mode of E Dorian rather than F Dorian), but is otherwise placed in such a way within the opera so as to draw attention to it as a conspicuously performative event – that is, John is aware that he is singing a folk song, and the audience is meant to hear it as something distinct from the opera’s default musical idiom.

Letter from Vaughan Williams to Holst (1933) 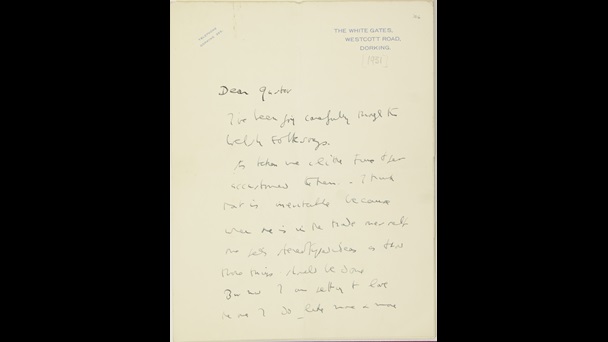 In this letter the composer Ralph Vaughan Williams writes to his friend and fellow composer Gustav Holst, reporting his impressions of Holst’s Twelve Welsh Folksongs.

For many English composers active in the early 20th century, folk music displayed stylistic practices that not only provided alternatives to Continental modernism, but came from sources that were distinctively and unimpeachably English. Some critics disdained the presentation of folk music in 'art music' contexts, arguing that it reflected both 'a lack of melodic creativity' among composers and a deliberate rejection of more progressive aesthetics in British art.[4]

Nevertheless, such objections were outweighed for many listeners by the attractiveness and novelty of the tunes themselves. This was certainly the case for Percy Grainger (1882–1961). His initial contact with folk songs came from published sources, but he later became one of the era’s most accomplished arrangers and collectors of folk songs, adapting many for concert performance in both choral and instrumental settings.

Unlike many of his English contemporaries (though like Continental counterparts such as Béla Bartók), Grainger regularly recorded his singers’ renditions using an Edison phonograph. He preserved over 200 songs in this manner (including this recording of 'I’m Seventeen Come Sunday' made in 1906) before transcribing them at his leisure.

Grainger’s collecting activities are therefore much more in line with ethnographic practices of the present day, and reflect the increasing sophistication that early 20th-century collectors and composers brought to the preservation, dissemination, and reimagination of England’s rural culture. 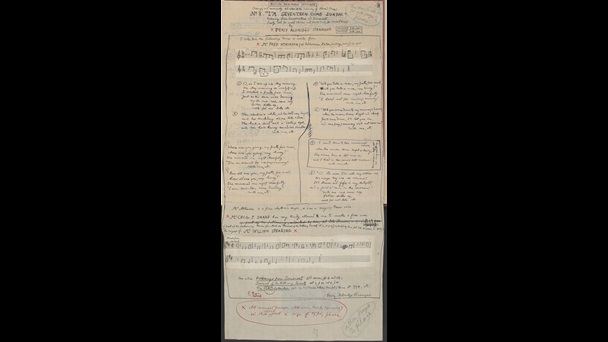 The tune and words for the song 'I’m Seventeen Come Sunday' was collected by Percy Grainger from a singer called Fred Adkinson in Redbourne, Kirton (Lincolnshire), in 1905.