Julian Harrison, lead curator of medieval historical manuscripts here at the Library, picks out collection items from our Harry Potter: A History of Magic exhibition

When you hear the words, ‘A History of Magic’, what is immediately conjured up in your mind? Do you think of dusty tomes, full of pictures of witches on broomsticks wearing pointy hats? Do you think of magicians pulling rabbits out of hats, or of potions being brewed up in bubbling cauldrons?

The British Library’s Harry Potter: A History of Magic exhibition will run from 20 October 2017 to 28 February 2018. We can’t reveal yet what will be in it but we can promise that we’re going to deliver an inspirational, engaging and entertaining show, that will appeal to visitors of all ages. The Library’s curators have been having enormous fun selecting the objects. In the process, they’ve uncovered numerous stories that illuminate the history and mythology that lie behind modern magical traditions.

Did you know, for instance, that the art of alchemy — central to the story of Harry Potter and the Philosopher’s Stone — has been practised worldwide and dates back at least to the time of the ancient Egyptians. Alchemy is the science of turning what are known as ‘base metals’ into ‘noble’ ones, in particular gold, and of creating an elixir that leads to immortal life. In The Philosopher’s Stone, first published in 1997 (and under the title Harry Potter and the Sorcerer’s Stone in the USA in 1998), Nicolas Flamel was the only known maker of the Stone in question and, aged 665, was living quietly with his wife in Devon.

The British Library holds many books and manuscripts relating to Alchemy. One of them is a beautifully illustrated manuscript known as the Splendor Solis (Latin for Splendour of the Sun), which was made in Germany in 1582 [British Library Harley MS 3469]. On one of its opening pages is a splendid image of an alchemist holding a flask filled with a golden liquid, out of which emerges a scroll bearing a mystical inscription, ‘Eamus quesitum quatuor elementorum naturas’ (‘Let us ask the four elements of nature’). The alchemist depicted here is wearing a flowing red cap and a red robe, and we’d love to think that Nicolas Flamel — a real, historical person, who lived in 15th-century Paris — may have worn something similar. We also adore the animals in the border, among them a peacock, a stag and an owl. 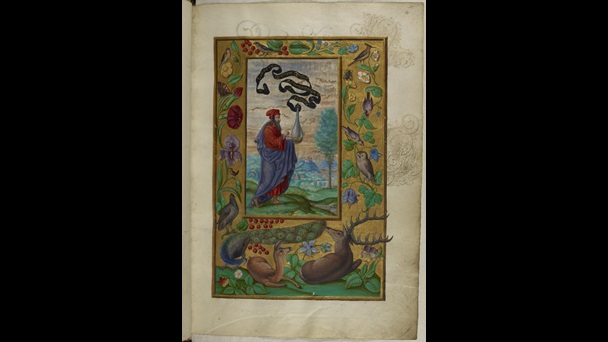 Splendor Solis has been erroneously attributed to Salomon Trismosin, who claimed to have conquered old age by rejuvenating himself with the Philosopher’s Stone

The Harry Potter stories are rich, of course, in colourful characters, breath-taking escapades and magical creatures. Many of these fantastic beasts are J.K. Rowling’s own creation, but others have illustrious precedents. In 1550, when global exploration was in its infancy and new animals were being constantly discovered, the French author Guy de la Garde devoted an entire study to the phoenix. One of the treasures held at the British Library is a finely-produced volume printed on vellum (calf-skin), and entitled L'Histoire et description du Phoenix (‘The History and Description of the Phoenix’) [British Library G.10992.]. It contains a hand-coloured picture of a phoenix emerging from a burning tree, and the caption above reads, in English translation, ‘A description of the phoenix and its fortunate place of residence, of its long life, pure conversation, excellent beauty, diverse colours, and of its end and remarkable resurrection.’ In ancient and medieval times, it was believed that when a phoenix grew old, it would make its own funeral pyre and allow itself to be consumed in the flames, fanned with its own wings, before it would rise again from the ashes. We understand that the British Library’s copy of L'Histoire et description du Phoenix is very unusual in being printed on vellum.

The History of the Phoenix 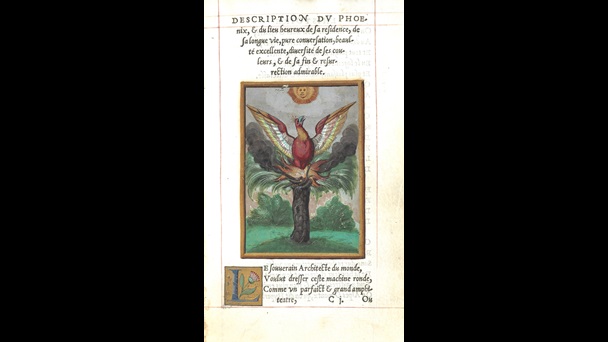 And do you know the story of the mandrake? Students at Hogwarts would have been very familiar with the notion that the cry of a mature mandrake would prove fatal to anyone who heard it. The roots of mandrakes resemble the human form, and in former times many myths grew up around the appropriate, and least lethal, way to harvest a mandrake. It was often believed that mandrakes would scream when uprooted, and that the safest way to do so would be attach them to an animal such as a dog, which would pull the plant from the ground while the person doing the harvesting blew a horn to shield them from the noise. Harry Potter fans will naturally be aware of the amazing artwork by Jim Kay for the new illustrated editions of J.K. Rowling’s books. Jim Kay’s anatomical sketch of a mandrake is found accompanying Harry Potter and the Chamber of Secrets (Bloomsbury, 2016) [artwork by Jim Kay, courtesy of Bloomsbury Press]. The root has an identifiable head and wizened arms and legs. Don’t forget to put your earmuffs on if you ever encounter one!

Study of a mandrake by Jim Kay 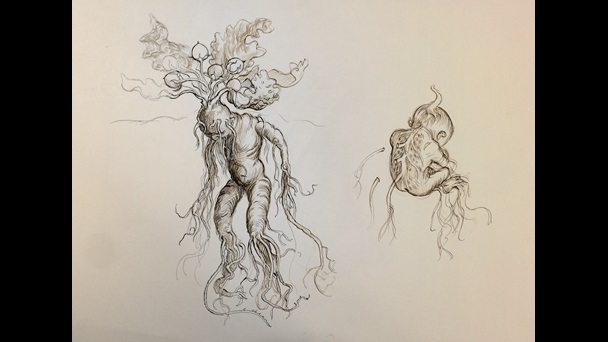 And surely everyone interested in dark magic would want to own a ring similar to that illustrated in this 4th-century papyrus [British Library Papyrus 46(5)]. The papyrus in question is part of a Greek handbook for magic. It was intended that the ring be buried in the ground, in order to prevent something from happening. The owner was advised to inscribe the ring with a charm according to the following formula, ‘May something never happen as long as this remains buried’. By inscribing and burying the ring, the owner could specify, for example, that they did not want a rival to be lucky in love. A real-life and ancient example of how magic has influenced societies across the world from the earliest times until the present day!

A Greek handbook for magic 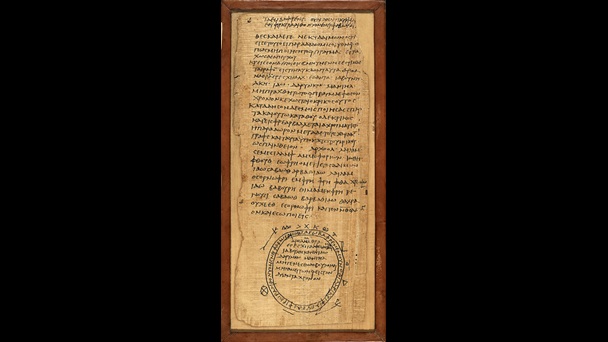 The British Library’s Harry Potter: A History of Magic exhibition is open until 28 February.