Many beautiful illuminated manuscripts survive from late Anglo-Saxon England. Kathleen Doyle and Eleanor Jackson examine the development of book decoration in the centuries leading up to the Norman Conquest.

Despite the tumultuous politics of the later tenth and eleventh centuries, books of remarkable beauty and sophistication continued to be produced in England. This is particularly true of religious books, reflecting both the wealth and piety of their owners or donors. Many of the surviving illuminated manuscripts produced in this period are biblical books, such as Psalters and Gospel-books. These fundamental texts were essential for the celebration of Christian services.

Readings from the Gospels feature during Masses, and Gospel-books were (and still are in many traditions) carried aloft around the church during services. The rare survival of an exquisite metalwork treasure binding shows how richly these books could be adorned externally. Internally, drawings and painted decoration ornamented the text as well as illustrating or commenting on it. Together, the manuscripts give a sense of the creativity and skill of artists and scribes and the resources of their patrons. 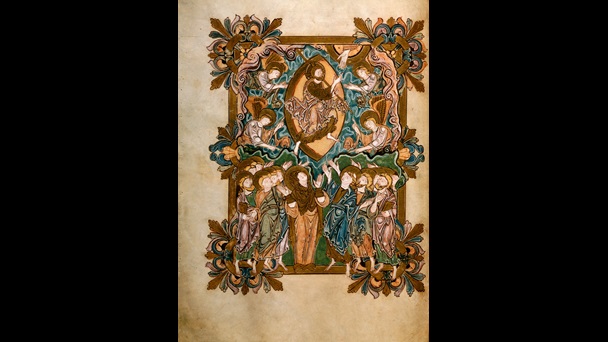 A representation of the Ascension of Christ in the Benedictional of St Æthelwold (British Library, Add MS 49598, f. 64v)

Given their political and religious importance, it is perhaps not surprising that the majority of the illuminated manuscripts surviving from the later Anglo-Saxon period were produced in the centres of Winchester and Canterbury. Indeed, the former centre has given its name to a style, associated with opulent painting in bright, strong colours, plentiful use of gold, heavy zoomorphic and acanthus-like ornament, elaborate draperies with fluttering hems, and golden bar frames, usually with particularly large groups of leaves at the four corners or centre of the borders. Despite the name, manuscripts in this ‘Winchester’ style were made in centres across southern England, as well as in northern France.

The foremost example of Winchester style is the magnificent Benedictional of St Æthelwold, which was written for and at the bequest of Bishop Æthelwold of Winchester (d. 984) for his personal use. The manuscript is the most extensively illustrated Benedictional known, and has been called the finest English manuscript surviving from the one hundred years before the Conquest. The scribe of the book recorded the bishop’s instructions in a rhyming preface:

He instructed his monk to make many elegant designs in this book,

and to perfect it with various images in beautiful colours and gold.

Another spectacular manuscript evidencing this style is the Ramsey Psalter, which may have been made for the personal use of one of Æthelwold’s contemporaries, Oswald, bishop of Worcester and archbishop of York (d. 992). 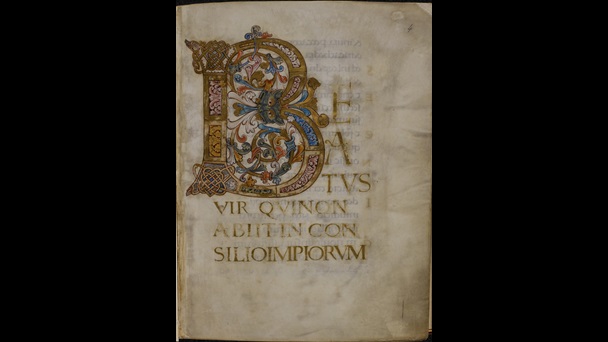 The decoration of the initial of the first word of the Psalms, B(eatus) (Blessed), features elaborated and stylized acanthus leaf decoration and gold interlace and compartments issuing from a central animal face or mask. The use of gold to write the text indicates the level of refinement of the Psalter and reflects the preciousness of the sacred text. 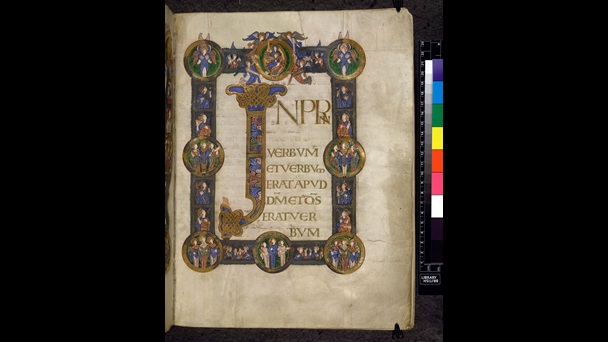 The Grimbald Gospels, whose initial patron is not known, features further elaborations of this style with figurative decoration in the corner roundels instead of foliage only. 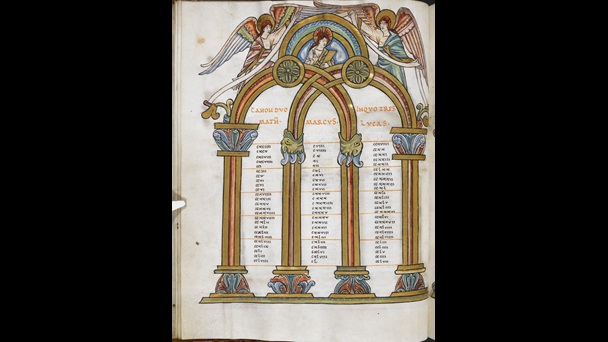 Similarly, the only elaborate illumination surviving in the Bury Gospels is the elaborated micro-architecture of the canon tables, but this is enough to give an indication of the richness of the original decorative scheme. Thick bands of gold and bright colours with foliate and decorated capitals embellish the book’s concordance system that lists common passages in the various Gospels.

As well as innovating to develop new styles, manuscript-makers in this period also looked to the past for inspiration. A ‘pocket gospel book’ made in Ireland in the late-eighth century was remodelled in mid-tenth century England, with Anglo-Saxon artists completing its unfinished minor initials in gold, repainting its major initials, and supplementing its existing Evangelist portraits with new ones in the Winchester style. The sensitive nature of these additions and the richness of the materials used suggest the considerable degree of reverence in which this manuscript was held by its Anglo-Saxon owners.

Continental connections and the Utrecht style

Throughout this period, people, books and ideas moved freely between England and the Continent, and ideas and artistic styles were shared or re-employed without regard to political boundaries. One of the most characteristic features of later Anglo-Saxon book art is the use of finely detailed line drawings instead of, or in combination with, painted decoration. In part, this may be due to the arrival in Canterbury by around 1000 of a manuscript now known as the Utrecht Psalter, after its current location (Utrecht, Universiteitsbibliotheek, MS 32).

The manuscripts made near the coronation city of Rheims in northern France during the reign of Louis the Pious (r. 814–840) are some of the most beautiful and evocative ever made. The Utrecht Psalter is one of these, and represents a revolutionary approach to the illustration of the Psalms. Each Psalm is interpreted literally, with each phrase illustrated in vibrant and expressive ink drawings. This style is sometimes referred to as the ‘Utrecht’ style after this book. Further, the drawings function as a type of visual commentary as well as illustration of the Psalm text. It is not known why the Psalter was brought to Canterbury, but it is clear that it was there because of the existence of copies of it made by Canterbury scribes. The Harley Psalter is the earliest of three copies of the Utrecht Psalter made over succeeding centuries. The Harley artists copied the content of the exemplar quite faithfully, retaining the literal interpretation of the text, while invigorating the line drawings with colour.

Although the illustrations of the Harley Psalter are unfinished, the book nevertheless includes the greatest concentration — over 100 — of coloured line drawings in Anglo-Saxon art. For example, in the illustration for Psalm 14, at the top of the left-hand page ‘the Lord looks down from Heaven’ seated in the sky surrounded by angels, to find that men are ‘evildoers’, shown fighting (Psalm 14:2-4). In the centre and looking up the hill to the right are perhaps those expecting ‘salvation for Israel’ (Psalm 14:7). The Psalmist then asks ‘who may dwell in your sanctuary?’ and on the next page, Psalm 15 is illustrated by those who ‘whose walk is blameless’ including a man in the centre representing those who ‘lend money to the poor without interest’. He gives money to two men, with a group of the poor with outstretched hands to the right. 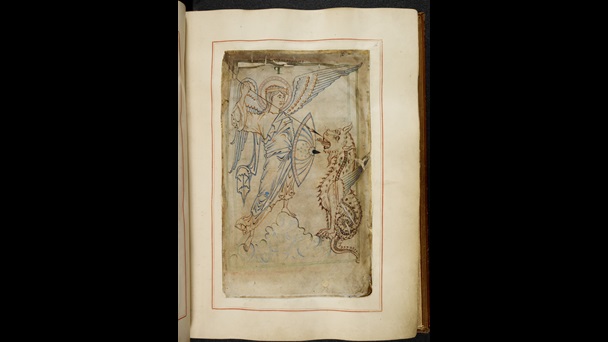 This ‘Utrecht’ style was employed also in the full-page prefatory drawings in the Tiberius Psalter, which has been characterized as ‘one of the most important monuments of late Anglo-Saxon culture to have survived’ (Michael Michael, in The Apocalypse and the Shape of Things to Come, ed. by Frances Carey (London, 1999), pp. 64–65). Twenty-four coloured line drawings illustrate scenes from the life of King David, by tradition the author of the Psalms, and of the life of Christ. Today the impact of the line drawings featured in the cycle is diminished slightly by the damage the manuscript suffered in a fire while stored as part of the Cotton collection in Ashburnham House in 1731, which resulted in the shrinkage of its pages. Nevertheless, these full-page Anglo-Saxon illustrations remain deeply evocative. 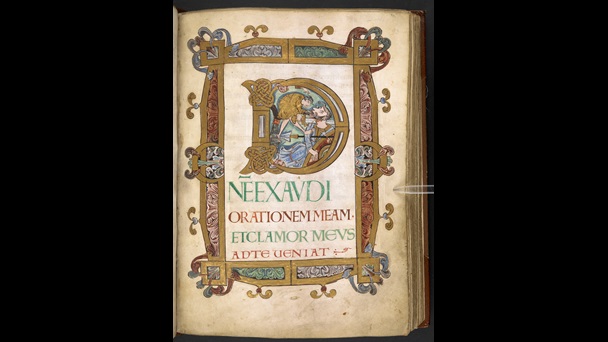 David's triumph over Goliath is represented within the letter D, from the Eadui Psalter (British Library, Arundel MS 155, f. 93r)

Artists sometimes used elements from both styles in the same book. An example is the Eadui Psalter, with ‘Winchester style’ gold borders at some of the major Psalms divisions, as in that surrounding the dramatic illustration of Psalm 101. Within the letter D, David’s triumph over Goliath is shown at the point where David cuts off Goliath’s head with the giant’s own sword, after having killed him with a slingshot. 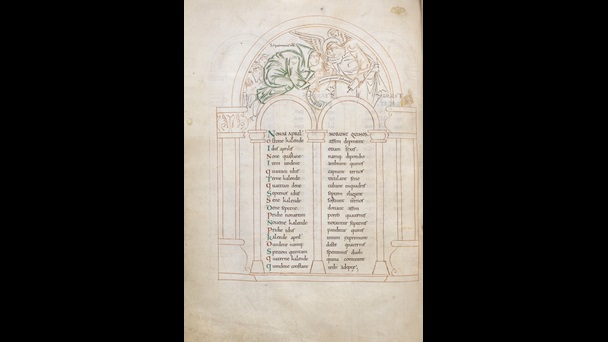 Other images in the book feature delicate line drawings, as in the Easter table, with a tinted drawing of Abbot Pachomius (d. 346), labelled with his name above him, receiving the tables from an angel.

From documentary evidence it is clear that many artists worked in a variety of media, but it is almost exclusively their painting in books that survives and gives us a glimpse into the great artistry of the Middle Ages. Together, these manuscripts demonstrate the sophisticated aesthetic of their makers and owners.