Old English heroic poetry celebrates ancient and contemporary warriors, but it also celebrates acts of self-sacrifice and the stories of brave women, and combines pagan and Christian values. Mike Bintley introduces some of the key texts of the genre, including Beowulf, The Battle of Maldon, The Dream of the Rood and Judith.

The literature of the Anglo-Saxons (c. 450–1100) is abundant in heroic, or epic, poetry: narrative poems which recount the deeds of heroic figures who overcome significant challenges in the pursuit of goals that were deemed virtuous by the standards of the day. Beowulf, the longest surviving Old English poem, is a good example of this in its own right, but it also shows signs of the rich tradition of heroic poetry that flourished after the settlement of Germanic peoples in Britain from the 5th century onwards. Warriors riding back from Grendel’s lair, following the bloody track left by the monster after losing his arm, compare Beowulf with the hero Sigemund, a dragon-slayer known to us from other works of Germanic and Old Norse literature such as the Vǫlsunga saga from Iceland. 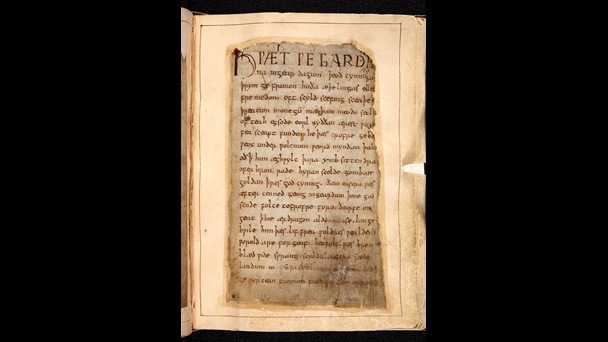 Beowulf is an Old English epic poem which survives in a single precious manuscript.

Fragments of the heroic tradition

Beowulf and a few other surviving works – circulated first as oral poetry, and later in manuscripts – show how rich the heroic tradition must have been, and how much was forgotten, destroyed, or discarded. A now lost manuscript known as the Finnsburh Fragment recounts an episode also found in Beowulf in which a marriage contrived to end a blood-feud results in a bloody battle where neither side gains the upper hand. Waldere, a poem surviving in just two fragments, clearly belongs to the same secular heroic tradition. Set during the reign of Attila the Hun (434–53) and briefly relating parts of the legend of Walter of Aquitaine, it recalls death in battle, contains martial boasts and celebrates the gain and loss of fame and material wealth and the weapons of war.

Longer, and more complete, is the roll-call of peoples, nations and heroic deeds given by the travelling poet Widsith, whose name means ‘widely travelled’, in a poem of the same name:

Widsith spoke, and unlocked his word-hoard,
he who had fared through most of the men,
peoples, and nations on earth.

As Widsith travels around the world, he speaks and sings of those he has met before. The complex tapestry of rulers and peoples whose threads dance through this poem leaves us with a clear sense both of how Anglo-Saxon audiences encountered these stories, and of the times of turbulence and opulence they recalled. We hear of Offa of Angeln, who ‘with one sword marked a boundary against the Myrgings at Fifeldor’, and of the Gothic king Eormanric, who gave Widsith a collar worth 600 coins of pure gold.

But this praise was not only for the ancient world, and the Anglo-Saxons made use of the same poetic language, symbols and motifs to memorialise contemporary victories – and defeats. In the Anglo-Saxon Chronicle entry for 937, The Battle of Brunanburh commemorates the victory of West Saxon and Mercian armies over a combined force of Scots and Vikings, celebrating above all else the slaughter of the invading army, and the shame of those who survived to slink back to their ships.

The most famous Old English battle poem, The Battle of Maldon, commemorates a very different sort of conflict: a battle that took place in 991 during which the ealdorman of Essex, Byrhtnoth, allowed his ofermod (‘pride’ or ‘overconfidence’) to get the better of him. Byrhtnoth, the leader of his loyal veterans and local Anglo-Saxon troops, permitted a raiding Viking army to take up a position on land in preparation for battle. This resulted in both the heroic death of Byrhtnoth, and ultimately a valiant defeat for the English. Save for a few deserters, almost all of Byrthnoth’s men face death by his side, delivering a series of rousing speeches. The elderly warrior Byrhtwold faces his death by saying:

The mind must be the harder, the heart the keener
the spirit the greater, as our strength lessens.
Here lies our leader entirely cut down
our good leader upon the ground; may he always mourn
who thinks to turn now from this battle-play.

Together, these poems show the extent of what has been lost from the secular, heroic tradition of Old English poetry; those works that celebrated victory in war, deeds of courage, valiant boasts, bloody fighting and the winning of great treasures.

In many ways inseparable from these secular and legendary traditions are those poems depicting biblical and saintly religious figures, who are often presented in very similar terms. The Dream of the Rood, in which the talking tree upon which Christ was crucified gives an account of his death, presents Jesus not as the suffering ‘man of sorrows’, but in the role of a military warlord who goes willingly to his death. Elene, a poem contained in the same manuscript, offers an account of the Roman emperor Constantine’s victory over his rival Maximian at the Battle of the Milvian Bridge. Before the battle, Constantine has a vision that guarantees victory so long as he leads his men to war beneath the banner of Christ. 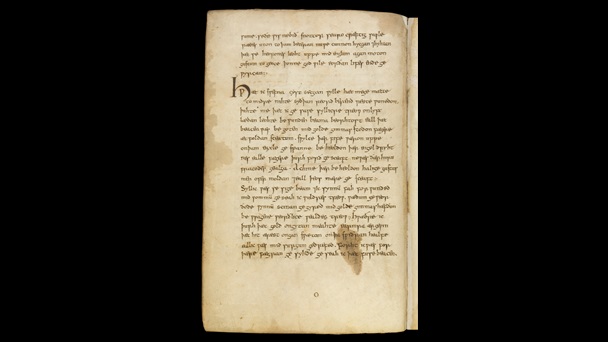 The Vercelli Book contains The Dream of the Rood and Elene.

The co-existence of Christian and secular pagan poetry proved troubling for some contemporaries. Archbishop Alcuin of York famously complained about this in a letter to the monks at Lindisfarne, who were apparently enjoying works celebrating the pagan hero Ingeld alongside those celebrating Christ. ‘What has Ingeld to do with Christ?’ Alcuin wrote. ‘The hall is too narrow, it cannot contain them both’.

Nevertheless, the roots of this tradition ran deep. In addition to what we might now think of as biblical epics, such as the poems Exodus and Daniel (based on the books of the same name in the Bible), there are several further works that follow the exploits of other individual religious figures. In many ways there is no less violence present in these texts, and it is often figures of virtue who are responsible for it! 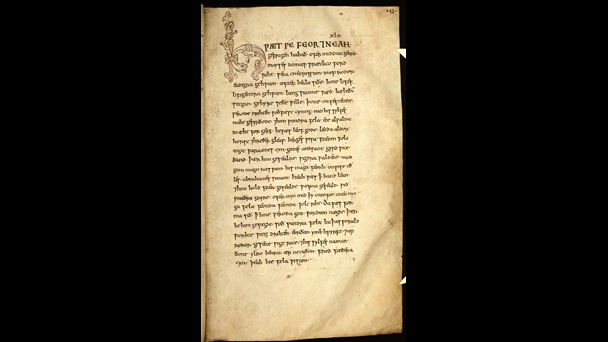 The opening of Exodus from the Junius Manuscript.

Two Old English poems celebrate the life of St Guthlac, once a Mercian warrior in the retinue of kings, who then became a monk, and then a hermit, establishing a refuge for himself in a fenland wilderness that had fallen under the power of demons. With the help of St Bartholomew, and by retaining his faith in God despite the direst threats, Guthlac succeeds in expelling the demons from this place and reclaiming it for human habitation. This is accomplished not by force, but by Guthlac’s moral fortitude, which Bartholomew rewards by binding the servants of darkness who have tormented him. 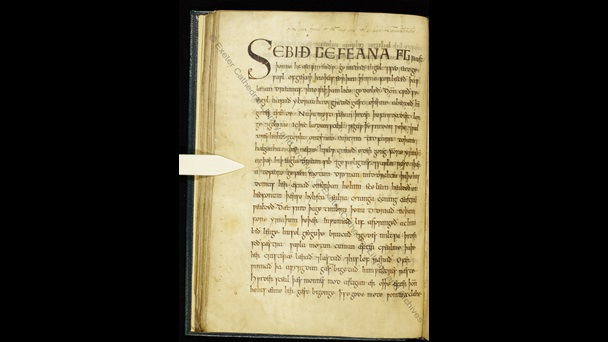 The opening of Guthlac A, one of two poems about the Anglo Saxon saint, Guthlac, in the Exeter Book. 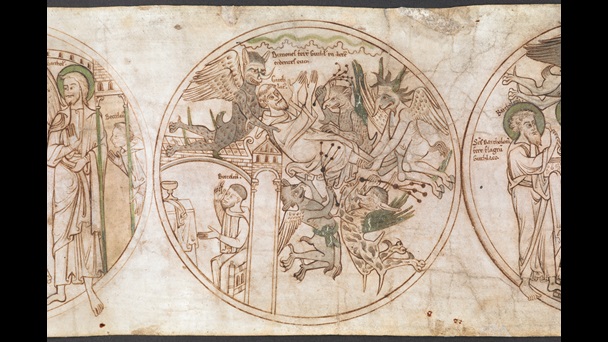 Guthlac being tormented by demons from the Guthlac Roll.

The Old English Andreas, like Guthlac, is also about reclaiming landscapes that have been taken by sinister forces. But whereas the fens of the latter are at a distance from human habitation (like Grendel’s fens in Beowulf), Andreas sees St Andrew undertake a perilous mission to a stone-built city named Mermedonia, whose inhabitants are devil-worshipping cannibals. After a dangerous journey by sea, Andrew enters the city to free St Matthew and the other captives held there, whereupon he is seized and tortured by the populace, who are spurred on by demons. After enduring three days of this torment, Andrew summons a torrent of water from a pillar in his jail cell, which swells up within the walls and threatens to drown everyone within the city walls. After the inhabitants of Mermedonia have undergone a hasty conversion to Christianity, Andrew allows the flood to subside, and crowns his victory over the Mermedonians by having a church built on the site from whence the waters sprang forth. 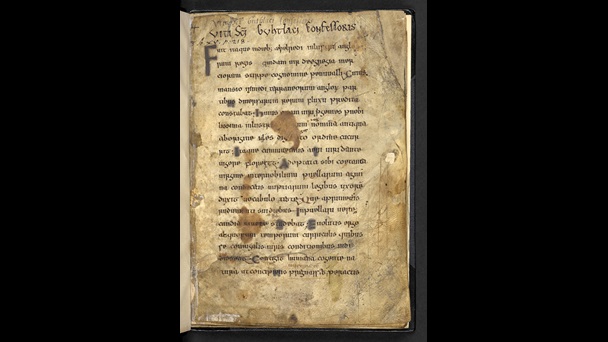 The earliest account of Guthlac’s life comes from a Latin prose text by a monk named Felix.

Violence performed against demons and against heathens, and legitimised by the redemptive intentions of figures such as Guthlac and Andrew, is not solely the province of men in Old English literature. The star of the show in Judith is an Israelite widow who sets out from her besieged city to take on the leader of the attacking Assyrian army, an evil general named Holofernes. Though Holofernes plans to rape Judith, his obscene drunkenness renders him helpless at her hands, and she severs his head, carrying it back to the walls of her city. The poem ends with Judith calling the Israelites forth to a battle in which the Assyrians are duly destroyed.

Other female figures, though less militant, are no less heroic. Juliana, another poem by the author of Elene, tells the story of religious persecution in the Roman Empire at the end of the 4th century, during which Juliana – a Christian – is martyred by the evil governor of the city of Nicomedia. It is ultimately not violence in which her power lies, but in the ability to remain steadfast and unflinching in the face of certain death. Post-mortem, the place of her death is transformed into one of Christian community.

A number of the conventions of Anglo-Saxon heroic poetry changed at a glacial pace, and throughout the surviving works there are many constants to be found, such as bravery, the inevitability of fate or divine will, the glories of material and heavenly rewards and the expectation that those who deviated from cultural norms were doomed to pay the price. This was nevertheless a malleable tradition, and one that was clearly adapted to suit various needs, including a new system of belief that elevated self-sacrifice to a new level, and brought what were once glorious defeats in battle a new status: that of defeating death itself.