The Danish and Norman conquests of England

The 11th century witnessed two conquests of England, first by the Danes, and then by the Normans. Here, we find out more about the invasions – together with their consequences, both on the English language and the government.

During the reign of Anglo-Saxon King Æthelred the Unready (r. 978–1016), England was subjected to waves of invasions by Danish armies. In 1012, the English had met a vast ransom demand for Ælfheah, the Archbishop of Canterbury.

They paid the Danish army £48,000 for Ælfheah’s release, only to see him recaptured, bludgeoned with bones and ox skulls, and then killed by a blow to the head with the blunt end of an axe. In 1013/14, Æthelred was deposed by Swein Forkbeard, the leader of the invading Danish forces, and then, in 1016, Swein’s son, Cnut, finally toppled the West Saxon dynasty and seized the crown of England.

The most telling Anglo-Saxon response to these events is found in what is arguably the earliest surviving political speech in the English language, written by Wulfstan, Archbishop of York (r. 1002–1023). Wulfstan warned his audience of the dissolution of society:

The sermon of the Wolf to the English when the Danes persecuted them most, which was the year 1014, from the incarnation of our Lord Jesus Christ.


Beloved men, realise what is true: this world is in haste and the end approaches; and therefore in the world things go from bad to worse, and so it must of necessity deteriorate greatly on account of the people’s sins before the coming of Antichrist.

According to Wulfstan, the Danish attacks had been brought on by idolatry, treachery, enslavement and the violation of sanctuary. Barbarous humiliation followed military defeat. Wulfstan recounts how English nobles were forced to stand by while their wives and daughters were raped.

But this evidence should be set alongside examples of co-operation between the English and Danes. Wulfstan was himself responsible for drafting the law-code issued by Cnut around 1020, while Cnut made active efforts to cultivate the English Church. In 1019, for instance, he confirmed the lands held by Christ Church, Canterbury, as recorded in the Cnut Gospels. 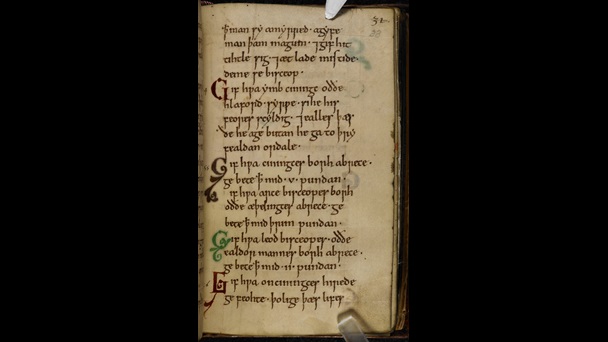 This is the longest Anglo-Saxon law code, issued by King Cnut (reigned 1016–35) with the advice of his counsellors (British Library, Cotton MS Nero A I, f. 32v)

For the next 200 years at least, the people of England were governed by an elite accustomed to speaking a different language from their own: Danish before 1042, then French after 1066.

But it would be a mistake to assume that economic, cultural or political power was monopolised by one linguistic community. In 11th- and 12th-century England, three main written languages (Latin, English and French) coexisted with spoken English, Danish and French. In certain segments of the population, especially in towns, several other languages (Welsh, Irish, Flemish and German) were also spoken.

Continuity with the Anglo-Saxon regime was also transmitted through the dynastic line of Emma of Normandy (d. 1052). Emma married Æthelred in 1002 and then Cnut in 1017. She was the great-aunt of William the Conqueror and the mother of two kings, Harthacnut (r. 1035–1037, 1040–1042, her son by Cnut), and Edward the Confessor (whose father was Æthelred). Emma’s story is told in a biography written in 1041–42 by a monk of Saint-Bertin. 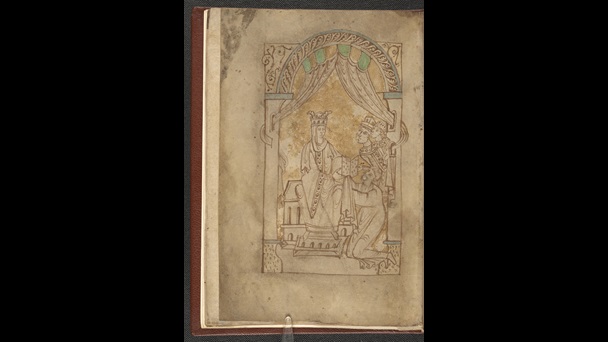 Image of a monk presenting Queen Emma with a book, while her sons Edward and Harthacnut look on, from ‘In Praise of Queen Emma’ (British Library, Additional MS 33241, f. 1v)

Emma and Cnut are shown together in the New Minster Liber Vitae, placing a golden cross on the high altar. In the same manuscript, Cnut’s name follows that of Æthelred in a record of the monastery’s benefactors. 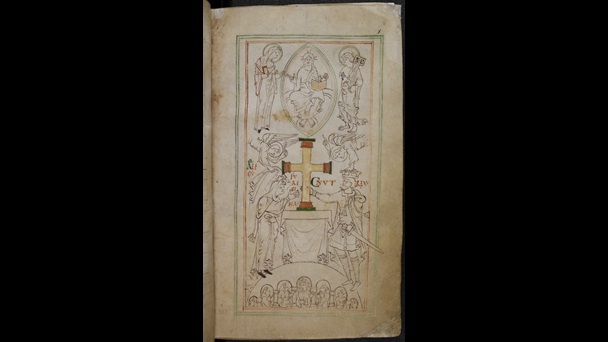 Tribute to the Danes

Danish armies had attacked the English coast each year from the 980s until the conquest of 1016, and then resuming in 1066 and only standing down in 1085.

The Anglo-Saxon kings of England famously collected hundreds of thousands of pounds of silver in tribute to pay off the Danes. This attracted the scorn of one author of the Anglo-Saxon Chronicle, who recorded the futility of attempts to head off attacks.

From 1012 until 1051, an annual tax was levied to support mercenaries. Kings were not the only members of society sufficiently rich to hire mercenary forces. Members of the dominant Anglo-Danish dynasty of Godwine – one of Cnut’s earls and father-in-law of Edward the Confessor – mounted military challenges to royal authority in England in 1052, 1065 and again in 1067. They used Flemish and Irish fleets, financed either by their own revenue or by the prospect of the spoils of war.

Consequences of the Danish invasion

After 1016, the kingdom of England became one component in a larger empire, ruled together with Denmark (from 1019) and Norway (from 1028). The legitimate Anglo-Saxon heirs — the sons and grandsons of English kings — were dispossessed or murdered, or lived in exile on the Continent, while the lands of the old aristocracy were parcelled out among Cnut’s associates. Power at the centre was reorganised to allow delegation, a necessity for kings who were frequently absent from England for months on end.

Cnut created four earldoms, reproducing the old English kingdoms of Wessex, Mercia, East Anglia and Northumbria. In time these earldoms mutated into dominant power blocs ruled by dynasties bold and powerful enough to challenge the king. The most telling sign of this changed political reality was the accession of Harold, Earl of Wessex in 1066, son of Cnut’s appointee, Godwine. Later that year, Harold would become the last Anglo-Saxon king of England.

The Norman Conquest of England

When William the Conqueror defeated King Harold at Hastings in 1066, this marked the end of the rule of England by Anglo-Saxon kings.

William was in fact a blood relative of the Anglo-Saxons (being the cousin of Edward the Confessor (r. 1042–1066), the Anglo-Saxon king who preceded King Harold. The new Norman regime therefore projected itself not as a conquest but as the proper succession.

In the years that immediately followed, the Normans consolidated their power by forcibly taking over the property of nobles and churches, and by brutally suppressing any uprisings.

Despite the bloodshed, three great legacies of the Anglo-Saxons survived the conquest:

It is only after the Norman Conquest that we can fully appreciate the extent of Anglo-Saxon government, as attested in Domesday Book. Domesday Book systematically records, settlement by settlement, England’s productive assets and the chains of ownership which linked them to the king. The commissioners collected data at three audit points: 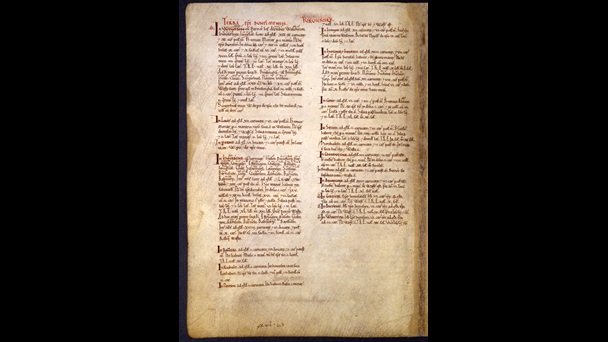 Domesday Book proves that thousands of villages and hamlets attested today were established before 1066. Its coverage of towns is far less comprehensive, and major centres such as London and Winchester are absent altogether from the surviving, unfinished record. What detail is provided reinforces the picture of pre-Conquest settlement, fiscal, legal and military obligations to the king, and international trade. Two important works testify to the detailed nature of the survey: the list of questions posed by the commissioners; and Exon Domesday. 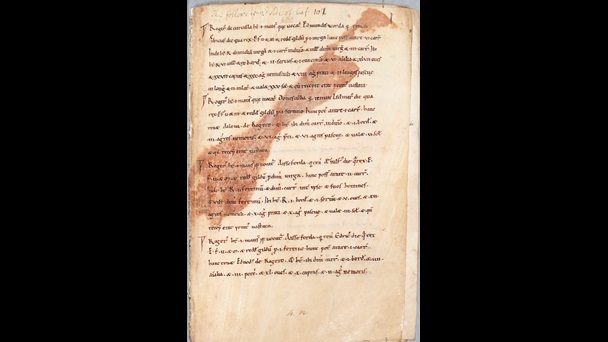 Exon Domesday is one of the most informative surviving documents of the Domesday Inquest, the survey of people and property in England that William the Conqueror ordered in 1085 (Exeter Cathedral MS 3500 f. 436v)

Anglo-Saxon England was famously wealthy, a reputation borne out by the scale, sophistication and centralisation of its carefully regulated coinage, running into millions of silver pennies. It was also intensively governed.

The system of justice and revenue-raising was based on sworn testimony gathered in the locality in the hundred and reported to the shire or county, at which point the sheriff answered to central government.

In turn, the shire and hundred enabled the collection of geld, the tribute first commanded by the king in order to pay off the Danish armies. This system underpinned the information-gathering that created Domesday Book.

Central government had the capacity to assess, record and tax the locality in a staggeringly intrusive fashion. Contemporaries frequently complained about the punitive burden of taxation.

England in 1066 was a productive land. Charters recorded the working of the landscape: its division into managed woodland, meadow, pasture and arable; the husbandry of animals; and the production of cheese, loaves, beer, salted meat and fish, timber and salt. Such processes demanded the embanking and enclosure of woodland and marshland, and the building of watermills and salt-works. The complexity of these management systems in Anglo-Saxon England can be glimpsed in documents such as the Ely Farming Memoranda and in archaeological investigations. 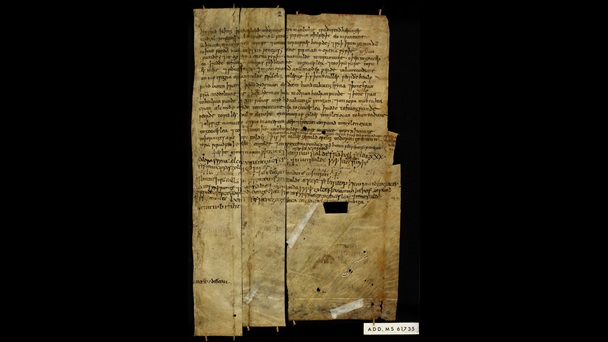 One major feature of the Norman Conquest was the efficiency and ruthlessness of wealth extraction by William the Conqueror, his nobles and by churches in Normandy. Illuminated books and other forms of movable wealth undoubtedly found their way to Normandy. Norman nobles acquired rural estates and interests in English towns. Property in Anglo-Saxon England passed to the owner as a working concern, with livestock and labour.

The Norman nobles who were given the estates of pre-Conquest land-holders, and occasionally their widows or daughters in marriage, also inherited the structures, organisation and animals, as well as the estate-workers, household servants and slaves. As had been the case before 1066, England remained a land of opportunity for craftsmen, illuminators, scribes and authors.

The last conquest of England

It is often said that 1066 saw the last conquest of England. England had been a rich kingdom and its spoils were worth having. At the same time, its governmental structures were sufficiently centralised to allow smooth running under a new regime, and it was the Anglo-Saxon ruling class who lost most.

Two contemporary descriptions cast a verdict on the aftermath of the Norman Conquest. One manuscript of the Anglo-Saxon Chronicle concludes its annal for the year 1066 with the bleak statement:

And always after that [the Norman Conquest,] it grew much worse. 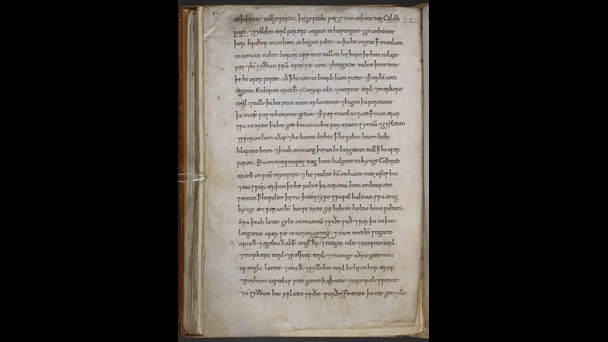 End of the entry for 1066 in the D manuscript of the Anglo-Saxon Chronicle (British Library, Cotton MS Tiberius B IV, f. 80v)

Orderic Vitalis, writing in Normandy around 1125, imagined a speech addressed by a Norman abbot to William the Conqueror himself:

I deem all England the spoils of robbery and I shrink from it and its treasures as from consuming fire.