Discover the archaeological and linguistic evidence for the earliest Anglo-Saxons in Britain, following the end of Roman rule.

Britain underwent great social and political change in the 5th and 6th centuries. The collapse of political and economic structures in the western Roman provinces coincided with the migration of groups of Germanic-speaking people, who came to Britain from across the North Sea. Historians are divided as to how, when and why these events happened, hampered in part by the absence of written records for this period.

Stories of migration are commonplace in origin myths. They mark a moment in time within a period of change; they distill long-distant memories into a shared experience; and they fashion a common narrative out of what was undoubtedly a complex and prolonged process.

Early stories told about the beginnings of Anglo-Saxon England fit into this pattern. Modern historians classify the 4th, 5th and 6th centuries in post-Roman Europe as the ‘Migration Period’.

What do cremations and burials tell us about the first Anglo-Saxons?

Modern understanding of this period depends on close analysis of archaeology, especially the burial record. The earliest substantial evidence for a Germanic presence in Britain is found in eastern England, especially around the Wash in Lincolnshire and Norfolk. Cremation cemeteries dating from the early 5th century are concentrated in this region and are rarely located elsewhere in England. These cemeteries contain burial urns and types of objects that are also found in Denmark, Norway and northern Germany.

At this period, cremation was the principal means of disposing of the dead. The corpse would be burned and the ashes placed in handmade earthenware urns. A few urns with pottery lids have been excavated, reflecting a continental tradition likely to have been imported to England.

In one example, found during excavations at Spong Hill in Norfolk (the largest known Anglo-Saxon cremation cemetery), the lid bears a three-dimensional representation of a humanoid figure. This figure is unique among surviving examples of Anglo-Saxon pottery and the closest parallels are from northern Germany. 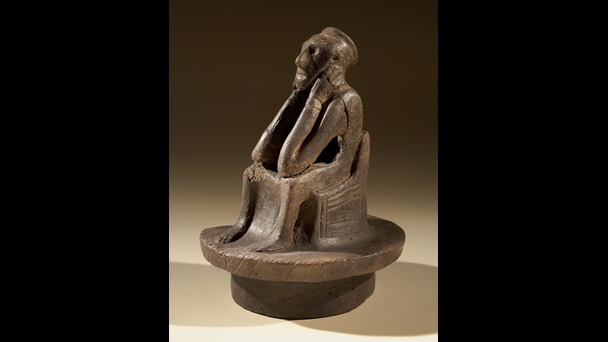 The cremation rite used in England seems to have been continental in origin, practised by people who had strong social connections across the North Sea. These practices became more diffuse as the 5th century progressed, with cremation coming into use more widely across lowland England.

However, by the 6th century, inhumation – the practice of burying the dead – had become the predominant burial rite.

Runes: the earliest evidence for the English language

The rich cemetery evidence for the 5th and 6th centuries is in striking contrast to the scarcity of written sources. Germanic pagan beliefs did not rely on written texts and so there was no need for books, writing or a literate class to enforce religious orthodoxy. Literacy levels were very low.

However, around 20 objects made in England before about 650, survive, inscribed with short texts written using the non-Latin, runic alphabet. Together with the law-code of King Æthelberht of Kent (d. 616), these inscriptions are the earliest evidence for the English language. 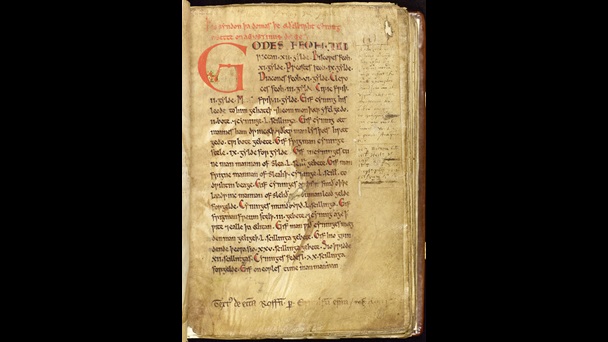 The Loveden Hill cremation urn, found in an early medieval cemetery in Lincolnshire, probably dates from the second half of the 5th century. The runes on the urn preserve what could be a female personal name and although found in Loveden Hill, the clay may have been brought from elsewhere. 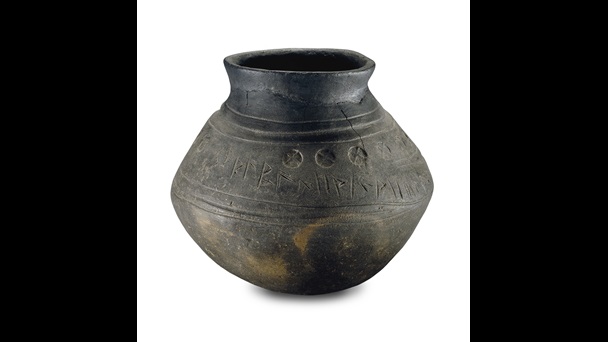 The runes on this urn provide one of the very earliest pieces of evidence for the English language (British Museum, BEP 1963,1001.14)

A later brooch found at Harford Farm in Norfolk was made for a woman who lived in the early 7th century. This brooch was also inscribed with writing in runes. Its decoration resembles items found in Kent, Francia and the Low Countries, showing the close links that continued between Anglo-Saxon England and mainland Europe. 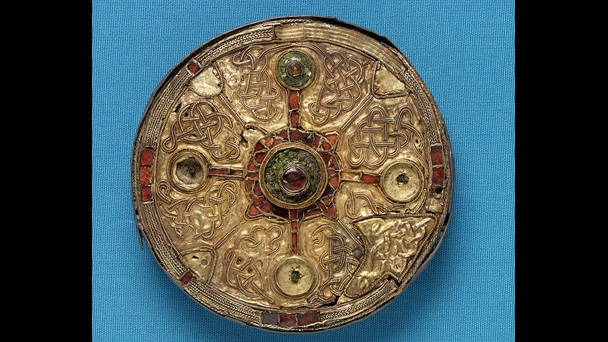 This brooch was found in a grave at Harford Farm cemetery, near Norwich, Norfolk, where it had been buried with its wealthy female owner towards the end of the 7th century (Norwich Castle Museum, 1994.5.78)

What can excavations of jewellery tell us about the first Anglo-Saxons?

The Binham Hoard was discovered by metal-detectorists between 2003 and 2015. It is the largest collection of gold from 6th-century Britain, and consists of two bracelets: a silver brooch and six gold bracteates (neck pendants which derive from the practice of wearing pierced Roman coins as jewellery). In Scandinavia bracteates were sometimes included in hoards (groups of objects that were deliberately buried) for ritual reasons. Circumstantial evidence points to Binham as an important early centre, probably with a religious focus.

Three bracteates from the Binham Hoard use the same central design of an armed male figure, holding a sword in his right hand and fighting a beak-headed creature. A short runic inscription possibly reads waat or wææt, meaning ‘liquid’ or ‘drink’ in Old English.

What do written sources tell us about the first Anglo-Saxons?

Written sources for this early period are extremely scarce, and the few extended accounts that survive were written down long afterwards. They borrow heavily from one another, telling tales of skirmishes between Germanic warriors and the native British, or the arrival of boats loaded with pagan migrants on the shores of eastern England.

These accounts should be treated with caution. This was not contemporary reportage of events as they occurred, but rather selective and retrospective accounts written by Christian authors to satisfy the needs of later audiences.

The most influential account of this early period of English history was a sermon composed around 540 by Gildas, a British monk. Gildas’s account is called The Ruin of Britain, and it was written to remonstrate with his own political elite. He railed against the impotence of the British leaders who, he thought, had failed to protect Britain from hostile pagan Saxon raiders.

Gildas's The Ruin of Britain 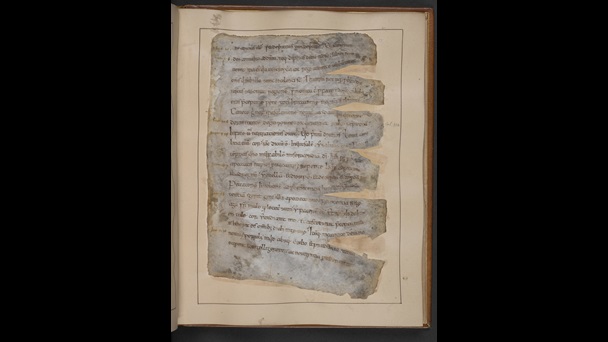 Gildas’s description was a major source for Bede (d. 735), writing almost 200 years later from his monastery at Wearmouth-Jarrow in the Anglo-Saxon kingdom of Northumbria. Bede was a Christian monk and teacher, whose final major work was a history of early England, its people and its Church. Bede’s Ecclesiastical History was widely read and frequently copied. It quickly became the most popular account of the origins of the Anglo-Saxon kingdoms, and of the coming of Christianity and Latin literacy to the English people. Bede was influenced by his personal understanding of biblical history. He interpreted scripture to mean that the conversion of the gentiles (the English) was a necessary precursor to the second coming of Christ.

Bede reworked Gildas’s account of the military campaigns of the pagan Saxons. In order to explain the political geography of his own day, he inserted a description of the settlement of the Germanic peoples who had travelled across the sea to Britain:

They came from three very powerful Germanic peoples, the Saxons, Angles and Jutes. The people of Kent and the inhabitants of the Isle of Wight are of Jutish origin and also those opposite the Isle of Wight, that are part of the kingdom of Wessex which is still today called the nation of the Jutes.


From the Saxon country, that is, the district know known as Old Saxony, came the East Saxons, the South Saxons and the West Saxons.


Besides this, from the country of the Angles, that is, the land between the kingdoms of the Jutes and the Saxons, which is called Angulus, came the East Angles, the Middle Angles, the Mercians, and all of the Northumbrian people (that is those people who dwell north of the River Humber) as well as the other Anglian peoples. Angulus is said to have remained deserted from that day to this.

The written sources for our knowledge of Anglo-Saxon paganism were made in a Christian context. One manuscript made in northern England in the 12th century contains an illustration of Woden, the most important of the pagan gods and reputed ancestor of the royal lines of several Anglo-Saxon kingdoms.

Aspects of the pagan religion of the Anglo-Saxons are attested in the modern English names of the days of the week:

The First Arrival of the Saxons and the Normans 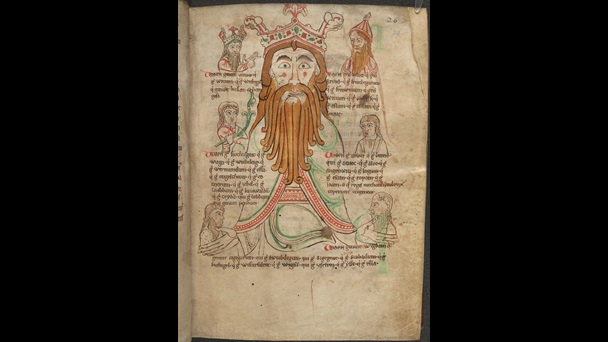 A 12th-century image of Woden surrounded by his descendants who ruled the Anglo-Saxon kingdoms (British Library, Cotton MS Caligula A VIII, f. 29r)

There are also relics of Anglo-Saxon paganism in the name of the holiest Christian festival, Easter. According to Bede’s On the Reckoning of Time, Easter was so-called because it fell in ‘Eostremonath’ (April), which was named after a pagan goddess.

Here are the Old English names of the months: The Reckoning of Time deals with computus, the science of time-reckoning and how to calculate the date of Christian holy days such as Easter (British Library, Royal MS 13 A XI, f. 33v)