Jana Igunma, Henry Ginsburg Curator for Thai, Lao and Cambodian, looks at the role of animals in Thai manuscript art.
Illustrations of real and mythical animals play an important role in Thai manuscript art, especially in Buddhist folding books and in animal treatises, but also in manuscripts related to astrology, divination and fortune telling. The belief that certain animals have super-natural powers is well reflected through the Thai zodiac, which is based on the Chinese twelve-year animal cycle. The zodiac is used for fortune-telling and for compiling horoscopes. Among the most important animal images are those of elephants due to the fact that elephants are associated with the monarchy and Buddhist kingship. 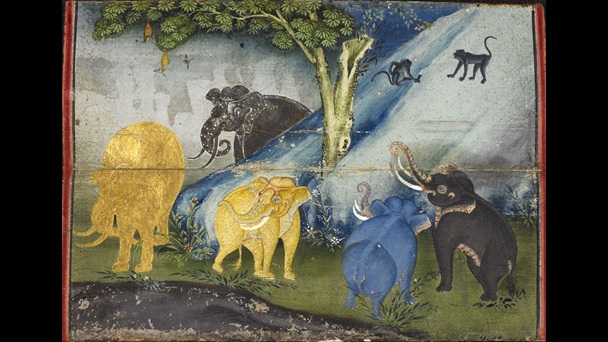 In Buddhist philosophy, the elephant symbolises one of the Seven Jewels of Royal Power, which are believed to be the accessories of a universal monarch. They represent different abilities and signs that a king must possess in order to stay in power. Elephants have played an important role in the Buddhist birth tales (Jatakas) and the life story of Gautama Buddha himself. Queen Mayadevi, Gautama Buddha’s mother, was said to have dreamt that a white elephant had entered her body. A royal astrologer interpreted this dream that she would give birth to a Buddha-to-be.

The image of a three-headed white elephant, known as “Erawan” in Thailand, served as a royal symbol in the historical Thai kingdoms on flags and state emblems. Sometimes the “Erawan” is shown with 33 heads. This elephant, which has its origins in Indian mythology, is associated with Sakka (Indra), Lord of the gods (deva).

Another major animal image is the Naga, a mythical water serpent. According to traditional Thai beliefs, human life is much determined and controlled by the Naga, being the guardian of the waters and rains and their life-giving powers. 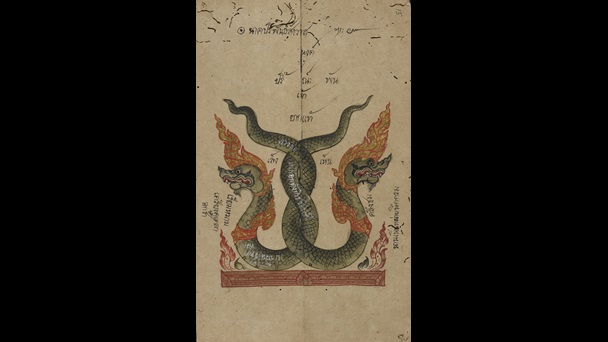 Nagas were thought to guard treasures of the earth, like precious stones, crystals, gold, silver, and pearls. The mythical “triple gem”, which symbolises the trinity of Buddha, Dhamma (Buddha’s teachings) and Sangha (the Buddhist community) was believed to be guarded by a Naga. Therefore, the Naga is regarded as a supporter and guardian of Buddhism. This is reflected in images of the Naga protecting the meditating Buddha-to-be from prodigious rains, an important scene in the life of the Buddha.
The opposite force of the Naga is a powerful mythical bird known as Garuda, which is associated with the god Vishnu. It is a symbol of royalty and features in the royal emblem of Thai kings. In general, birds represent peace, righteousness, warmth and light in Thai Buddhist belief. Another mythical bird image of Indian origin is Hamsa, a swan- or peacock-like bird deemed sacred in Buddhist mythology. Small or colourful birds are often used in Buddhist manuscript paintings for decorative purposes. Black birds sometimes appear in scenes depicting hell and after-life.

Mahabuddhaguna and other Buddhist texts 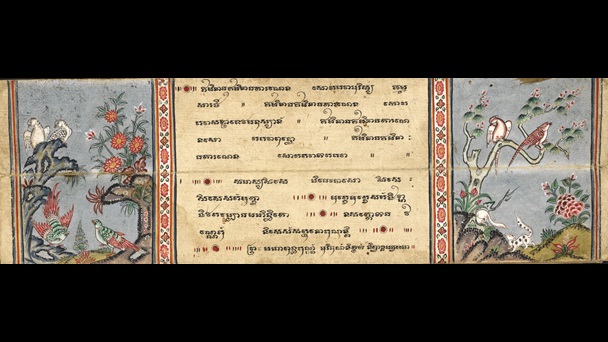 Paper folding book containing a text on the ten qualities of the Buddha, together with selected extracts from the Pali canon from 18th century central Thailand.

There was a tradition in 19th century Siam to produce treatises on animals that played an important role at the royal court and Buddhist monasteries. Among such were first of all elephants, particularly albinos, but also horses and cats. Whereas elephant treatises described the mythological importance and the characteristics of certain types of elephants, horse treatises were mostly used as manuals for artists who painted large temple murals covering Buddhist topics which often involved images of horses. 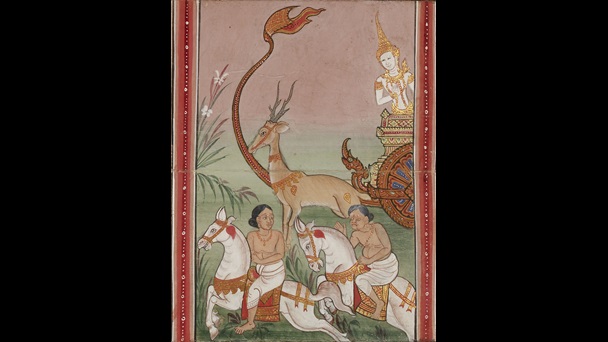 Cat treatises usually provided poetic descriptions of the features of different types of cats that were known in Siam, and what effect keeping and breeding a certain type of cat could have on its owner. Therefore, cat treatises were sometimes used for divination and fortune-telling.
The ancestor of the famous Siamese cat breeds is the Thai “moon diamond” (wichian māt) type, which in Siam was regarded as a royal cat. Certain cat types were believed to be the “keepers” of Buddhist temples resulting in this type being closely guarded and highly revered. There was a strong belief that certain types of cats could bring good luck, prosperity or health to the owner, whereas other types were regarded as unlucky animals to be avoided. 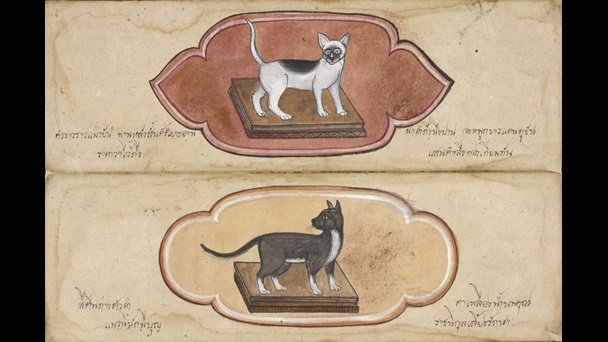