Dr Matthew Shaw looks at the prevalence of animals in children's literature.
Stories about animals have always been a staple of children’s literature. At first, such books were not particularly concerned with entertainment, but had the practical aim of helping children to learn to read, count and understand the world around them. Children’s assumed familiarity with animals could help with this. To take one key example, Comenius’s Orbis sensualium pictus, one of the earliest known books aimed at children and which dates from the seventeenth century, attempted to use animals to teach children to learn the alphabet by mimicking animal noises. The book shown below has been translated from Latin and German into English, and includes examples such as the ‘Duck quacketh’ or the ‘Bear grumbleth’. 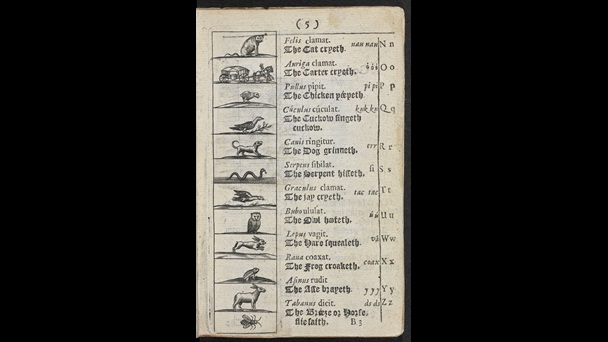 Often described as the first children’s picture-book, this alphabet book uses the sounds made by animals as a way to learn the letters.

By the eighteenth century the market for children’s books was clearly growing, fuelled by growing literacy, a concern for the moral or religious education of the young, cheaper paper and more economical printing methods. Publishers cannily grasped the opportunity to sell more books and set about finding new products to sell.

Often, these were reworkings of existing stories and used older woodblocks, such as images of horses, dogs or sheep, but by the early nineteenth-century, more sophisticated texts were offered for sale. An increasing number of popular illustrated natural histories, public displays of exotic animals and the earliest public zoos in Paris (1793) and London (The Tower of London from the 1720s, and the Zoological Society of London from 1826) expanded the menagerie of creatures available for writers and illustrators.

Publishers seeking a commercial advantage, might make use of these creatures in educational texts, such as this alphabet book, An Alphabetical arrangement of animals for little naturalists, probably compiled by the printer and published under the pseudonym ‘Sally Sketch’ in 1821. The title makes reference to the popular pursuit of natural history, a subject deemed both pleasant and useful, and arguably more practical than fairy tales or nursery rhymes. 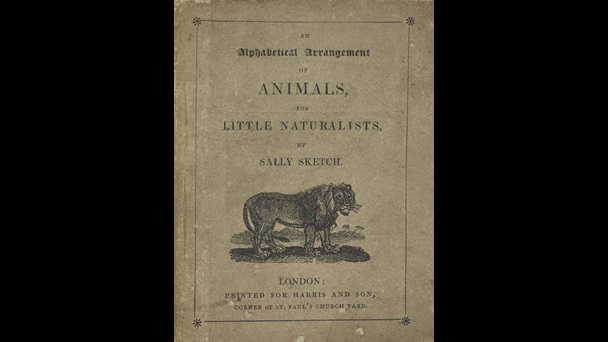 This book features an alphabet of animals and was created to help children learn to read.

Not that animal tales were without a moral message. Mrs Sarah Trimmer’s Fabulous Histories, ‘designed for the instruction of children respecting their treatment of animals’, was first published in 1796 and remained in print for many years. Sarah Trimmer ((1741-1810), who had twelve children of her own, had a particular interest in education. She advised Queen Charlotte on Sunday schools, founded one of the first such schools in Brentford, and later published influential reviews of children’s literature in her periodical The Guardian of Education (1802-1806).

Fabulous Histories interweaves the story of a family of robins and human family, and aimed to teach children about kindness and social duty. The family of robins offered a model of behaviour for young humans to copy, and extending sympathy to animals would also encourage children to be kind to one another.

It was to prove to be an influential model for many children’s stories for much of the nineteenth century. Trimmer’s book was issued in many editions, with a range of illustrations and sometimes in abridged form as in the History of the Red-Breast shown here (1793). The use of the robins, it should be noted, also told a particularly British story, with robins presented as the acme of family life, and alien birds, such as the cuckoo regarded with suspicion.

History of the Red-Breast 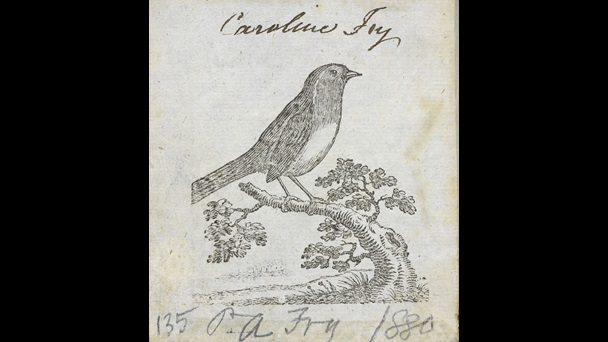 In Sarah Trimmer’s enormously successful book she interwove the stories of a family of robins and a human family.

While these books were all aimed at children, and we can assume that children’s reading was tightly controlled in the nineteenth century, works initially aimed at adults also became seen as children’s stories. The most commercially successful of these, Anna Sewell’s Black Beauty (1877), which has sold millions of copies, was not composed necessarily as a children’s story, but as a lesson about the proper treatment of horses. Written in plain language with stablemen in mind as an audience, Sewell ‘sought to induce kindness, sympathy, and an understanding treatment of horses’ and an end to the cruel use of certain reins and blinkers. 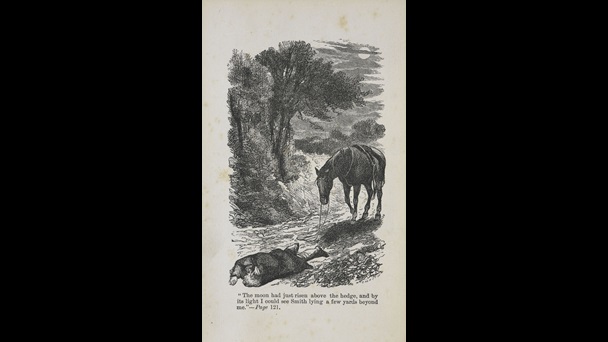 This children's classic is told from the perspective of the horse Black Beauty.

The success of Black Beauty points to the potential attractions of animal tales, particularly to children. While they may have been written for a particular pedagogic purpose, such as teaching kindness to others, learning the alphabet, or abolishing cruel treatment of horses, the popularity of animals in children’s literature also speaks of the affinity we see between young people and animals. While the status of domesticated animals and pets could perhaps reflect a child’s sense of powerlessness in a world dominated by adults, as well as a delight and wonder about the world.

By the turn of the twentieth century, animals had firmly established themselves as central to the pantheon of tales for children. Numerous works in the ‘golden age’ of Edwardian children’s literature contain unforgettable creatures, such as the crocodile in J.M. Barrie’s Peter and Wendy (1911; and later dubbed Tic Toc), or are its central characters, such as Kenneth Grahame’s The Wind in the Willows (1911) and, of course, Beatrice Potter’s series of animal tales.