Animals have always been central to human culture, as cave paintings around the world attest. In more recent times, they have also been used to reflect on what it is that defines us as human. Here, one of the curators of the 2015 British Library Animal Tales exhibition, Matthew Shaw, explores some examples of how this has changed over time.
Animals, as the anthropologist Claude Lévi-Strauss suggested, are ‘good to think with’. (Totemism, 1964). From the earliest human societies, they have provided us with metaphors and symbols to discuss how we are born, live and die – and perhaps what happens to us afterwards. Animals have been central to religious ceremonies and the dress and rituals of shamans and religious figures and were used to identify different tribal groups or families. In part, this was because of the close relationship earlier societies had with the natural world, but also, Lévi-Strauss suggested, because the variety of the animal kingdom offered a way to mark distinctions and difference.
The complexity of the animal world also featured in classical texts, such as Ovid’s Metamorphoses (here shown in a edition produced during the French Renaissance). 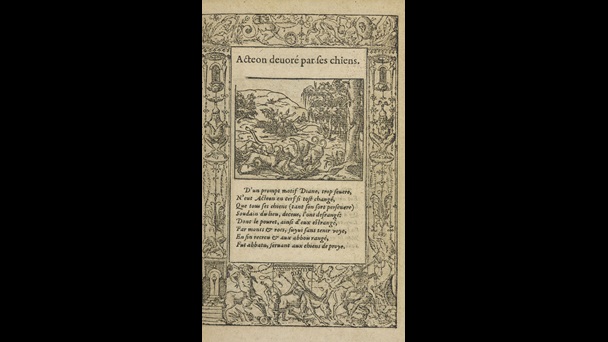 It also featured in Chinese and western medieval literature. Notable among the latter is the rich history of illuminated bestiaries, which sought to categorise the natural world, and included imaginary creatures such as the manticore or basilisk as well as more easily observable species, such as hares or hedgehogs. In such works, animals characterised certain religious or moral characteristics, such as chastity, fidelity or bravery, and served as a form of spiritual education. For much medieval art and literature, the animal world offered a rich source of allegory, symbol, allusion and myth. Biblical stories of interaction with animals provided a popular source for imagery and stories, such as Adam and the Serpent, Noah’s Ark, Daniel in the Lion’s Den, or the Holy Spirit descending as a dove. As commonly-understood motifs, animals added an allegorical depth to the stories and art of the day, adding a religious or moral dimension to apparently everyday scenes.

By the late-middle ages, it was widely believed in the West that there was a clear distinction between humans and animals. Unlike animals, humans possessed both souls and sentience. During the Early modern period, however, these concepts were tested and gave rise to considerable philosophical debate. In particular, the French humanist and essayist, Michel de Montaigne reflected both on the ethics of killing and cruelty towards animals and on their ability to reason. ‘On Cruelty’ reflected on Montaigne’s responses to viewing the butchering of chickens and the hunting of hares, and how these activities might undermine any claim he might have to virtue. In his ‘Apology’ he wondered whether animals might themselves have reason, and posed the question how did he know whether he was playing with his cat, or was she playing with him?

Michel de Montaigne's writings raise questions about the intelligence and consciousness of animals and humans.

Such arguments raised a host of questions about the nature of knowledge, the status of the human and ethics of how animals were treated, and were vigorous attacked by others, such as the philosopher Rene Descartes; they also underscore how useful animals were ‘to think with’. Montaigne was also particularity interested in the differences between humans, and the difficulty of communication between one person and another. Animals, in Montaigne’s thought, may often be taken as a symbol of this great gap, separated as we are by language and physical body.
If the humanistic thought of the Renaissance put men and women at the centre of things, then the Romanticism sought the awesome and the sublime in the natural world. For Romantic poets, their inner lives could only find emotional expression in relation to the wild places of the world. It was only natural that living creature would figure largely in their works. Yet, where animals (including birds) did appear on the page, they could be portrayed in more or less symbolic ways. The poet John Keats, for example, deftly caught the flight of Eagles that  ‘may seem to sleep wing-wide upon the air’ (Lines Written in the Highlands After a Visit to Burn's Country), but the fauna that he depicts is, according to some critics, more a cipher or representation of an idea than a concerted effort to capture the real, living nature of the thing. For Keats, the symbolism and emotional experience of the observing the Nightingale was more important than capturing its reality.

'Ode to a Nightingale'

'Ode to a Nightingale'

In contrast, his fellow poet, Samuel Taylor Coleridge read widely in natural history and spent time closely observing the natural world. In Coleridge, animals are depicted with a startling realism, while also taking on the twin work of metaphor and shaping emotion. As his biographer Richard Holmes notes, on the morning that Coleridge was leaving the Lake District to return to his responsibilities in London, he observed a great murmuration of starlings, one that ‘expands & condenses, some moments glimmering & shivering, dim & shadowy, now thickening, deepening and blackening!’ Holmes draws attention to the freedom of flight and menacing sense of ‘threatening chaos or implosion’ in the image of a ‘deepening and blackening’ host.
In more recent times, our understanding of ourselves and of the natural world has been deeply informed by expanded scientific knowledge. Charles Darwin’s theory of evolution and natural selection, as described in his On the Origin of the Species in 1859, began a profound rethinking of our relationship with animals. While the cultural repercussions were slow and complex, notions of species and race fed into what are now clearly unscientific theories of racial types and natural instinct, as well as economic theories espoused by thinkers such as Herbert Spencer in the 1860s.

First use of the phrase 'survival of the fittest' 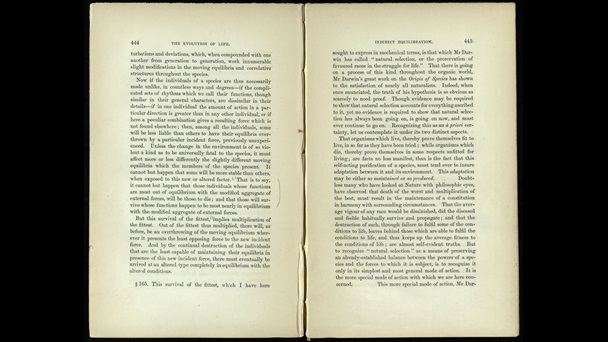 The Principles of Biology by Herbert Spencer (1864) looked at biology in terms of themes, such as Function and Adaptation. In this book Spencer introduced the expression ‘survival of the fittest’.

Some of these ideas can be detected in stories such as Jack London’s turn of the century adventure story, Call of the Wild, which explores the re-emergence of atavistic instincts in the dog, Buck as he reverts to the company of wolves.

The Call of the Wild 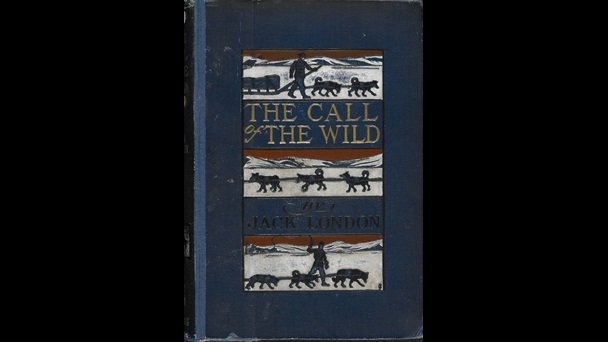 Jack London’s story charts the journey of a domesticated dog to a creature of the wild.

Over time, the theory of evolution once more placed us on the same plane as animals, much like some suppose our ancient ancestors considered our relationship, and in many ways erased the difference between ‘us’ and ‘them’. For some thinkers, such as the philosopher Peter Singer, there is no reason to distinguish between animals and humans in ethical terms. Any boundaries between human an animal is arbitrary and, in Singer’s neologism, ‘speciesism’.  The unravelling of our genetic code has revealed the great similarities in our DNA between humans and other creatures, while work on social behaviour, language, and neuroscience also continue to emphasise what we share with our fellow creatures.
Such knowledge has also paused philosophical and ethical challenges, particularly following advances in genetic manipulation. The cloning of the first animal from an adult cell, a sheep named Dolly in 1996, provoked an intense debate about our rights and responsibilities towards the natural world. 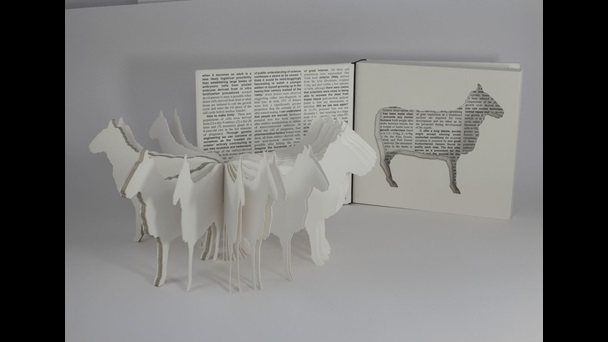 The world’s first artificially cloned animal, Dolly the sheep, is reproduced repeatedly in this edition of seventeen artist’s books.