From the suffragette Sophia Duleep Singh to the Communist MP Shapurji Saklatvala: explore the lives of notable South Asians in 19th and 20th century British and Indian politics.

By the 19th century, British colonialism had brought many changes to the lives of people in India, leading to the founding of political associations that fought for equality and social justice. Asian activists in Britain also joined in the struggle to influence public opinion and parliament. They campaigned for Indian independence, but also supported broader national and international concerns. Participating in key political struggles, such as votes for women, education and healthcare, they fought against discrimination and inequality.

Elected Liberal MP for Finsbury in 1892, Dadabhai Naoroji was the first Indian nationalist politician to win a seat in parliament, despite Lord Salisbury’s jibe that the British people would not accept a ‘black man’ as an MP.[1] Naoroji’s election provoked mixed reactions: some saw it as ‘an odd choice for an English constituency’; others considered an Indian voice to be ‘extremely valuable and useful’.[2] Public figures including Labour politician Keir Hardy and Florence Nightingale endorsed him. 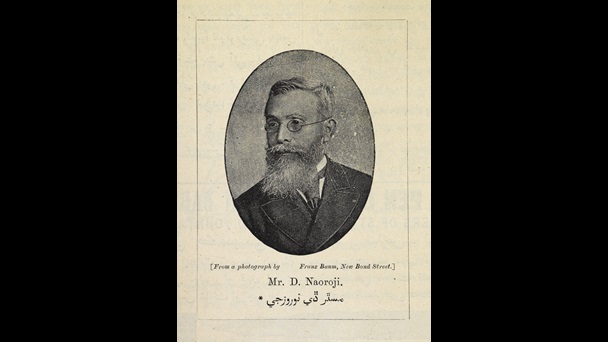 Dadabhaj Naoroji was the first Indian nationalist politician to win a seat in the UK parliament, supporting free education and public housing throughout his career.

Naoroji was considered a model MP. He supported the Liberal party programme of free education, public housing and Home Rule for Ireland. He championed women’s suffrage organisations and campaigned for ‘justice for India’, informing public opinion of the nature of British rule. In his book Poverty of India (1876) he argued that British policy ‘drained’ India of £30–40 million every year, causing widespread poverty in India. With this argument, Naoroji thus questioned the claim that British rule was beneficial to India. Naoroji and other early nationalists campaigned to reform the system of British governance in India, and drew attention to the country’s 250 million people who they believed had no representation in the British parliament. 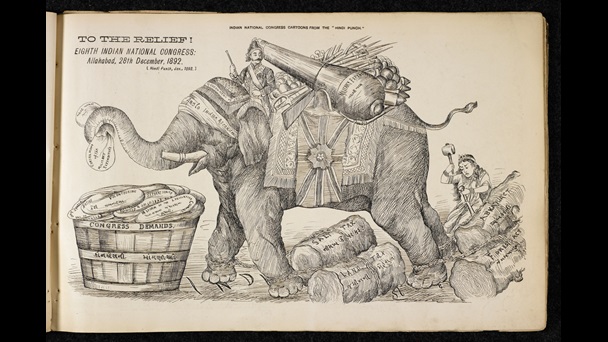 This cartoon depicts the Indian National Congress, their demands, and the factors which halted their progress – such as various taxes, Acts and military expenditure.

Naoroji lost his seat when the Liberals were defeated in 1895. In the same year, Mancherjee Bhownaggree was elected Conservative MP for Bethnal Green.

Princess Sophia Duleep Singh, daughter of Maharaja Duleep Singh, was a prominent suffragette and member of the Women’s Social and Political Union. She nationally campaigned for votes for women, as well as locally in Kingston and Richmond where she regularly spoke at branch meetings. On 18 November 1910, known as ‘Black Friday’, Sophia led a 400-strong demonstration to parliament together with Emmeline Pankhurst. Clashes broke out between the police and protesters and over 150 women were physically assaulted. 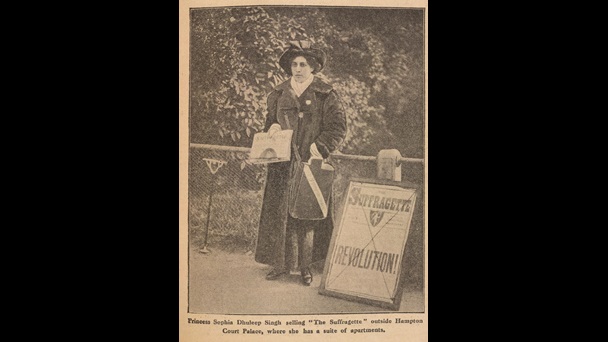 Sophia Duleep Singh often sold the newspaper The Suffragette outside her home in Hampton Court Palace.

Sophia took part in many publicity campaigns and was often seen selling the newspaper The Suffragette outside Hampton Court Palace, where she lived. She and her sisters were given free use of Faraday House on the grounds of the palace. This grace-and-favour house was part of the settlement and pension presented to Sophia’s father Duleep Singh who, at the age of 10, had his title and power as Maharaja of the kingdom of Punjab removed and was exiled to Britain.

Sophia also belonged to the Women’s Tax Resistance League, whose slogan was ‘No Vote, No Tax’. Her refusal to pay taxes led to her prosecution several times, and some of her valuable possessions, such as a diamond ring, pearl necklace and gold bangle were impounded. 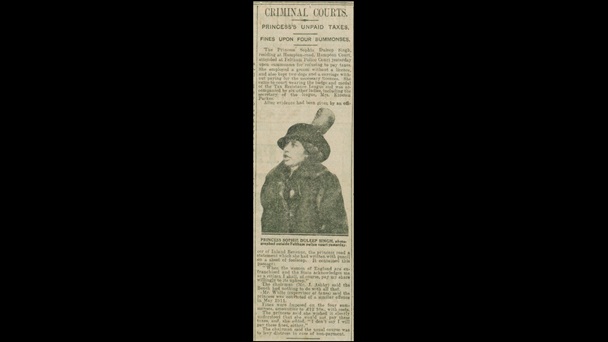 Sophia's political activities raised concerns in some quarters. In a letter sent to Lord Crewe in April 1913, a civil servant asks ‘if anything could be done to stop her’ and whether the King should consider evicting her from her lodging.

Transcript of telegram for Lord Crewe about Sophia Duleep Singh 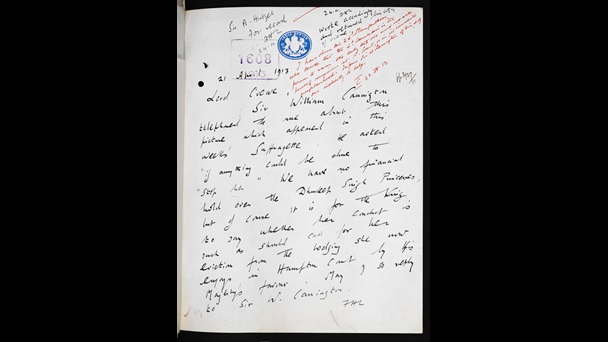 Sophia Duleep Singh's activism did not go unnoticed, with some calling for her eviction from her lodgings in Hampton Court Palace.

In addition to her suffragette activity, during World War One Sophia organised collections for Indian soldiers fighting on the Western Front. She also donated money towards the Lascar Club in the East End of London.

Sophia was not the only Indian suffragette. Other Indian women campaigned for the right to vote, too. For instance, a small delegation took part in the 1911 Coronation Procession of 60,000 suffragettes.

Photograph of Indian Suffragettes on the Women's Coronation Procession The Indian contingent, marching under an elephant banner, was a part of the Empire Pageant.

Map for a Suffragette march, June 1911 The Women's Coronation Procession involved some 60,000 women fighting for British suffrage. The route of the march was from Westminster to the Albert Hall in London.

Shapurji Saklatvala was the third Asian politician to be elected to parliament. Born in 1874, he arrived in Britain to work as a manager in Manchester for his maternal uncle, the pioneering industrialist, J N Tata. However, his observations of the poverty and labour conditions of the working classes, both in India and Britain, led him into radical politics. In 1921, he joined the newly formed Communist Party of Great Britain (CPGB). Saklatvala saw the interests of the British and Indian working classes to be interdependent. An active trade unionist, he campaigned against capitalism and colonialism to improve labour conditions in Britain and India.

Photograph of Shapurji Saklatvala and his wife 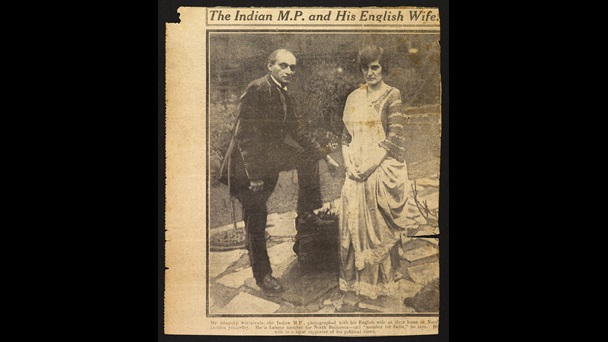 Shapurji Saklatvala, North Battersea’s Labour MP, is pictured standing next to his wife in their garden in North London.

In 1922, Saklatvala was elected MP for Battersea, a working-class constituency in London, with a majority of 2,000. Popular among his voters, he was re-elected on a CPGB ticket in 1924, the only communist to succeed. A powerful speaker, he addressed meetings all over Britain, championing workers’ rights during the depression years. He was hounded, though, for his communist sympathies. In 1926, during the general strike, he was imprisoned for giving a speech in Hyde Park. In and out of parliament, he also campaigned for Indian independence. Saklatvala lost his seat in 1929 as Battersea electors felt he had lost touch with their aspirations.

Advertisement for Saklatvala's political campaign in 1931 Campaign advertisement for Shapurji Saklatvala’s election campaign. He highlights the issues of unemployment and poverty in North Battersea, and invites constituents to attend party meetings at various dates throughout November and December.

Gandhi in Britain campaigning for independence

The end of World War One began a new phase in the anti-colonial struggle. The 1919 Amritsar massacre (also known as the Jallianwala Bagh massacre), and the repression that followed, shattered Indian faith in British justice and any hope for change. Under the leadership of Gandhi, the Indian campaign for freedom was transformed into a mass movement. Indians abandoned cooperation, and large-scale civil disobedience campaigns took place. This led to Britain calling the Round Table Conferences, a series of three sessions held in 1930–32 on the future status of British government in India.

Article about Gandhi in England from The Illustrated London News This article shows the breadth of activity Gandhi took part in, during his time in England in 1931. From meetings and conferences, to dinners and receptions - Gandhi was able to discuss issues concerning Indian self-governance with a wide range of the British political establishment, as well as the general public.

In 1931, Gandhi attended the Second Round Table Conference in London. Having studied law in London in the 1890s, he had subsequently practiced as a lawyer in South Africa where he supported the Indian community’s struggle for basic rights. His legal training and experience proved an asset in the Conference negotiations. Gandhi was treated like a celebrity and met many of Britain’s political and social elite, as illustrated by photographs, cartoons, films and other media from the time. Photograph of Gandhi at the Second Round Table Conference in London. The Gandhi-Irwin Pact meant that Gandhi was the representative of the Indian National Congress in attendance.

The sessions achieved little in the way of real political reform in India, but Gandhi captured the public imagination and was mobbed by enthusiastic crowds in Britain, particularly in the East End of London and by mill workers in Lancashire. He also met with actor Charlie Chaplin. Gandhi was not simply a political leader and a staunch campaigner against colonialism. He preached Satyagraha, a movement of non-violent civil disobedience, which he used as a tool against the British Empire in his bid for Indian freedom. Today, many all over the world still practice Gandhi’s strategy in their struggles. This report demonstrates Government responses to Asian political activity in Britain. It portrays Asian men as uneducated; divesting them of any political agency and manipulated by leaders of the Indian Workers Association. It's existence reveals that this movement was seen as a threat to national security.

In their bid to improve conditions of labour for their members, they established links with the British Labour Movement. Some middle-class Indians also joined. Based in the Midlands, the Association had branches in many industrial towns. By 1947, splits and factions among its members led to its decline, but with the coming of a new generation of migrants from the subcontinent, the IWA was once again revived and today there are still branches in many British towns.

Born in 1896, V K Krishna Menon came to Britain in 1924 to study at the London School of Economics. During his long residence in the UK, he devoted his time and energy primarily to two social and political causes: Indian independence and the poverty in the London borough of St Pancras. A member of the Labour Party since his student days, he was elected Councillor for St Pancras in 1934. He became so popular that he was re-elected with an increased majority at each subsequent election, voluntarily resigning in 1947 to become independent India’s first High Commissioner to Britain.

During his 14 years as a councillor, Menon worked with enthusiasm to improve living conditions for the people of Camden. He served on all major committees, but is particularly known for his work to extend the library service, including introducing a mobile library. His passion for education saw him set up lectures for children and a Book Week. Menon's activism widely affected British arts culture. In 1937, he co-founded the non-fiction Pelican series with Penguin publisher Allen Lane, making the writings of prominent thinkers such as Sigmund Freud, Bernard Shaw and H G Wells affordable to the general public.

As Secretary of the India League, Menon was an energetic campaigner and publicist for Indian independence and against colonialism and fascism. Under his leadership, the India League became a large movement with branches all over Britain. Many MPs and British members of the public supported it. Menon, a qualified barrister, found time to defend lascar sailors, often without fee.

Poster for an India League meeting Krishna Menon often organised, and spoke at, many meetings for the India League to spread their ideas on Indian nationalism.

In 1955, he was honoured with the Freedom of the Borough for his services to Camden. After his death in 1974, the Council erected a plaque outside his house in his memory.