Discover the contributions and influence of South Asian artists, poets, intellectuals and sportspeople within British arts, sciences, law and sport.

In other fields, South Asian intellectuals and academics working in Britain contributed to major scientific discoveries. Notable contributions from a range of disciplines include Dr Frederick Akbar Mahomed, who advanced research into high blood pressure; economist R C Dutt, who wrote the influential Economic History of British India; and mathematician Srinivasa Ramanujan, a leading number theorist of the 20th century.

In 1879, Frederick Akbar Mahomed published his research on the cause and progression of high blood pressure in the medical journal The Lancet, changing forever our understanding of hypertension.

His pioneering work overturned accepted theories on the cause of hypertension. He showed that high blood pressure led to kidney damage and other illnesses – not the other way round. Even apparently healthy people could suffer from raised blood pressure, which undetected could prove fatal. This was a landmark discovery for public health.

Nothing significantly new has been added to Mahomed’s discoveries, yet he remains unacknowledged. He died from typhoid in 1884, aged 35. A subscription was set up at St Mary's and Guy's by his medical colleagues to help his wife and five children. He is buried in Highgate Cemetery, London. 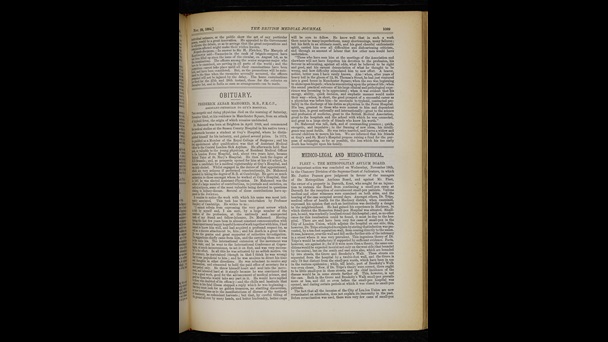 A member of the Royal College of Surgeons, and Assistant Physician at Guy’s Hospital, London, Frederick Akbar Mahomed’s contribution to medicine was far-reaching. This obituary describes him as ‘quick, energetic and compulsive’, and lists his achievements including his contribution to understanding kidney-disease.

Calcutta-born Romesh Chunder Dutt arrived in Britain in 1868. After enrolling at University College, London he sat the Indian Civil Service exam and was called to the Bar in 1871. He divided his time between India and Britain. In 1897, he was appointed Professor of Indian History at University College, London. His seminal study The Economic History of British India (1901) developed a ground-breaking critique of colonialism, focussing on the draining away of wealth by Britain that deprived India of economic development. He advanced his argument alongside MP Dadabhai Naoroji and Major B D Basu. His work later influenced the economist John Maynard Keynes. 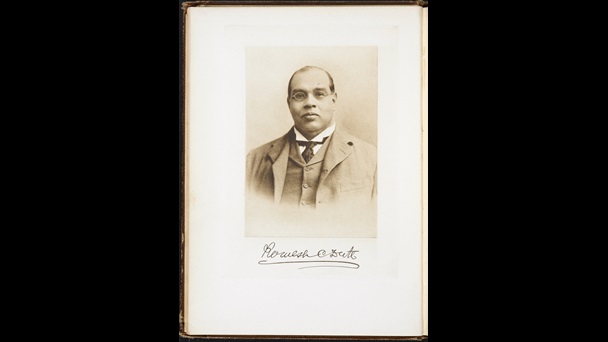 As a Professor of Indian History, Romesh Chunder Dutt developed a revolutionary critique of colonialism. His seminal study The Economic History of British India, published in 1901, focussed on how British governance deprived India of economic development.

Cornelia Sorabji was the first woman to study law at Oxford University in 1889. She fought a long battle to sit the law exam alongside her male colleagues, a first victory for opening up the profession to women and equality in higher education. Sorabji was prevented from practicing as a lawyer, however, until the ban on women in the legal profession was lifted in 1919. Meanwhile, she returned to India in 1894 to work as a legal adviser. She retired in Britain in the 1930s, working as a writer and broadcaster. During her life she was critical of the Indian independence movement. She died at her home in Finsbury Park in 1954. 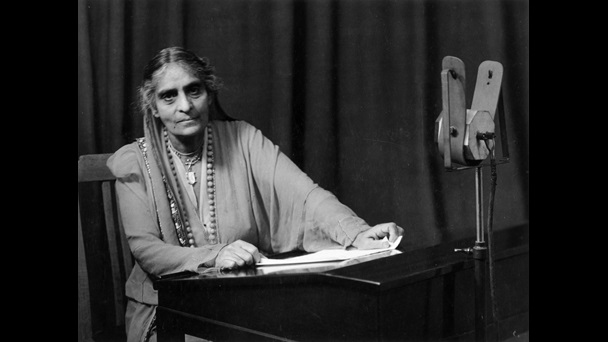 In later life, Cornelia Sorabji was an active writer and broadcaster in Britain. Amongst her books were two autobiographies and other works reflecting her life, including Queen Mary’s Book of India, which raised money for the Indian Comforts Fund during WWII.

Cricket, the quintessential Empire sport, attracted many of India’s royal elite and Indian university students in Britain. One of the most famous early cricketers was K S Ranjitsinhji, Prince of Nawanagar State in India. A student at Trinity College, Cambridge, he started playing for Sussex in 1895 and became team captain four years later. The first Indian to play for England in 1896, Ranji made his test match debut against Australia at Old Trafford cricket ground. In 1899, he was the first cricketer to score 3,000 runs in one season, a feat he repeated in 1900. His partnership with fellow Sussex cricketer C B Fry was one of the most successful in cricket history. 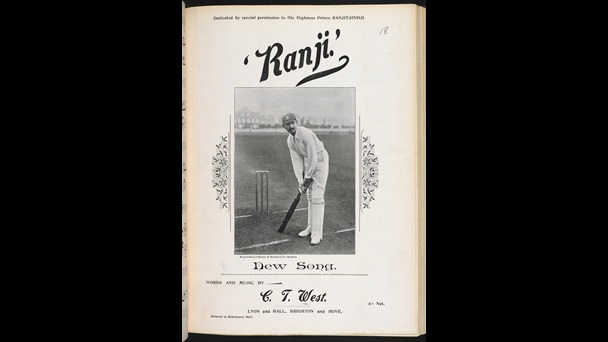 A champion batsman and affectionately known as Ranji, he captured the public imagination and was worshipped by his fans. Cigarette cards and other souvenirs featured his image, and songs were written in his praise. Over his 27-year career in test cricket he scored over 24,600 runs, including 72 centuries, and took 133 wickets.[1] Many others – like Iftikar-Ali Khan, Nawab of Pataudi (the last cricketer to play for both England and India) and Monty Panesar – have followed in his tracks. 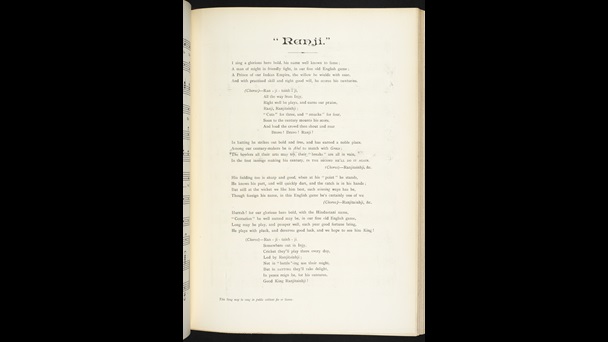 As a champion batsman, Ranji captured the public imagination. Songs, such as this one by C T West, were written in his praise.

Poet Rabindranath Tagore won the Nobel Prize for Literature in 1913 for his collection Gitanjali, published in London in 1912. The prize gained much significance by being given to an Indian for the first time. This honour established Tagore’s literary reputation worldwide. Tagore was awarded a knighthood for services to literature in 1915 which he renounced in 1919 in protest against the Amritsar massacre (also known as the Jallianwala Bagh massacre). He remained a lasting influence on poets like W B Yeats and Ezra Pound. 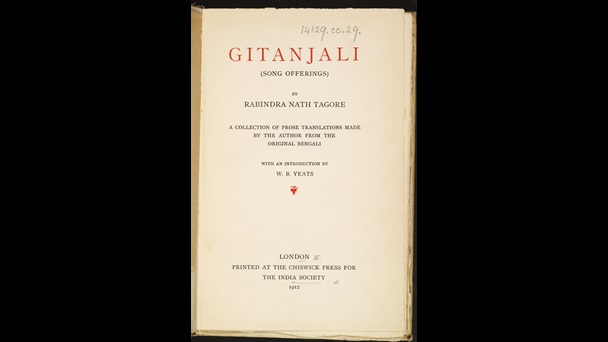 Gitanjali, by Rabindranath Tagore, is a collection of his poems translated from Hindustani. In 1913, Tagore was awarded a Nobel Prize for Literature because of his ‘profoundly sensitive, fresh and beautiful verse’.

Tagore was also renowned as a visual artist and educational theorist. His school at Santiniketan and Viswa-Bharati University focused on developing the child’s imagination and had a lasting impact on education. Santiniketan engaged many scholars from across the world, including his English friends, Oxford professor E J Thompson, missionary C F Andrews and Lord Elmhirst, who followed Tagore’s learning and teaching style at Dartington Hall, Devon. Rabindranath Tagore was a renowned author, visual artist and educational theorist, which led to him being lionised by British society.

Art historian Ananda Coomaraswamy contributed significantly to debates on Indian art in Britain. A founding member of London’s India Society in 1910, he promoted Indian art to educate Europeans about Indian sculpture and painting. Jacob Epstein and Eric Gill, two of Britain’s most important modernist sculptors, enthusiastically began to imitate Indian techniques and styles, inspired by photos shown to them by Coomaraswamy.

Advertisement for the Bibliophile Bookshop 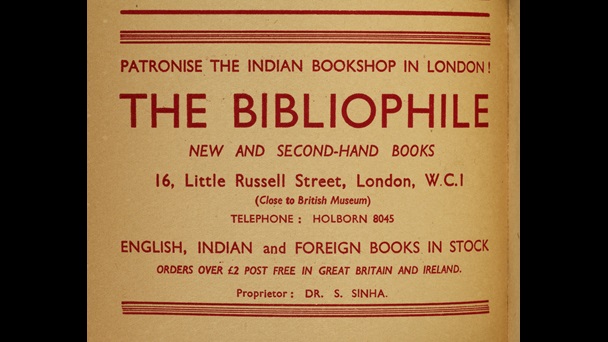 The Bibliophile bookshop, situated near the British Museum, became a meeting place for Indian writers in the 1930s.

The magazine Indian Writing was edited by Asians associated with the Indian Progressive Writers’ Association. It featured short stories, critical essays and reviews. It provided a platform for many writers and activists in the 1940s. Published from Sasadhar Sinha’s Bibliophile Bookshop near the British Museum, it served as a meeting place for many Indian intellectuals. An advertisement for the magazine Indian Writing which was edited by people associated with the Indian Progressive Writers’ Association. It featured short stories, critical essays and reviews.