Explore the expansion of trade and Empire and discover the stories of the first South Asians to settle in Britain.

The early relationship between Britain and India was based on trade. In 1600 Britain founded the East India Company. As the East India Company expanded, its political control increased. The Company introduced raw materials such as tea, jute and rubber to the UK, which were essential to Britain’s development as an economic powerhouse. The importance of cross-empire trade grew during the time of the British Raj in India, and was vital to Britain’s rapid industrialisation. The coming of steam-powered liners, and the 1869 opening of the Suez Canal, connecting the Mediterranean and Red Sea, reduced the journey times between both countries. In Britain, trade exhibitions, advertisements, educational pamphlets and magazine publications created a glamorous and exotic idea of an India of opulent palaces and maharajas. Below the surface lay the stark realities of workers’ lives.

The Mirror of British Merchandise and Hindustani Pictorial News was an Urdu language magazine published in the late 1800s. Its cover illustrates vividly the colonial relationship between India and Britain. The magazine advertised goods that were manufactured with Indian raw materials (such as cotton) in Britain, but sold back at higher prices to the Indian market.[1] It also featured news, articles and pictures highlighting India’s close ties with Britain.

Cover of The Mirror of British Merchandise magazine 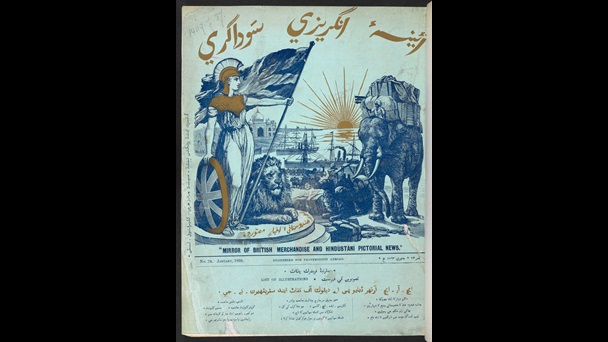 An Urdu language magazine published in the late 1800s, the Mirror of British Merchandise's cover illustrates the colonial relationship between India and Britain.

Numerous ‘empire exhibitions’ showcased in spectacular fashion the resources, arts and crafts from Britain’s dominions and colonies across the world. Typically, they displayed a glamorised public face of the British Raj in India. At the 1924 Wembley Empire exhibition, for example, the Indian Pavilion was modelled on Mughal architecture, with features from the Taj Mahal, Shah Jahan’s tomb for his wife in Agra, and Delhi’s famous mosque, the Jama Masjid. The Indian pavilion featured an Indian restaurant and displays of Indian cotton, a panorama of a tea plantation, foodstuffs, minerals and ores, as well as silks and textiles. The British Empire Exhibition transformed the Wembley area of London for good – the exhibition’s purpose-built ‘Empire Stadium’ would later become the well-known Wembley football stadium.

Advertisement for the Indian Pavilion and British Empire Exhibition 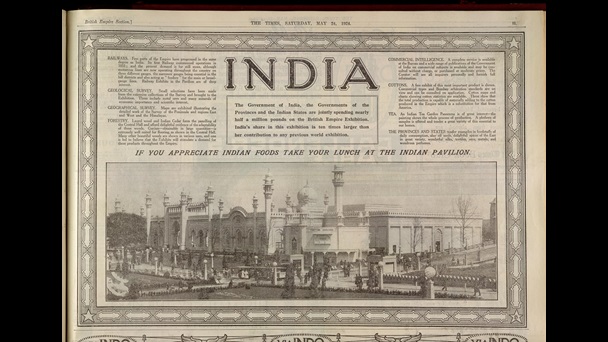 The Wembley Empire Exhibition showcased cultures from across Britain’s dominions, with the Indian Pavilion featuring a restaurant and displays of tea, minerals and textiles.

One of the major commodities exported from India to Britain was tea. The East India Company began commercial tea production in Assam in the 1820s. A growing industry, by 1900 there were around 4000 tea estates in north and south India, as well as over 2000 in Ceylon (now Sri Lanka). This popular drink generated a hugely profitable industry, and a tea culture emerged in Britain with its own quintessentially English customs and rituals. This advertisement, from the tea manufacturer Lipton, promises a cuppa direct from ‘the tea garden to the teapot’. The romanticised image depicts a beautiful Indian plantation worker consuming a comforting beverage. It fails to reflect the harsh realities of life as a tealeaf picker, which included poor wages and long hours of physical labour.[2] 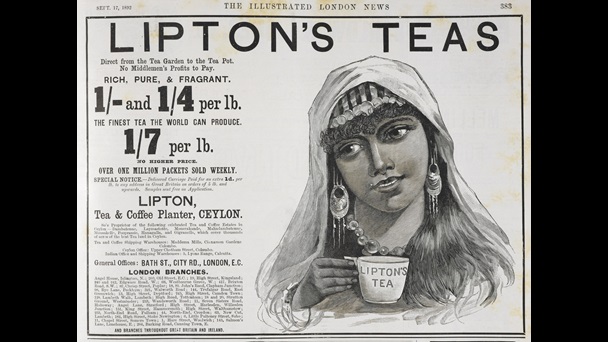 An advertisement for Lipton's tea from plantations in Ceylon.

In the late 19th and early 20th century steam-powered liners were the lifeline of the British Empire, ensuring the steady flow of people and goods to the remotest corners of the world. The hard labour and commitment of lascar sailors on-board ensured the smooth flow of trade, vital to the growth of the Empire. While travel on the liners was often seen as glamorous, the harsh conditions for the lascar sailors working in the hold and firing the engines attest to a different reality. 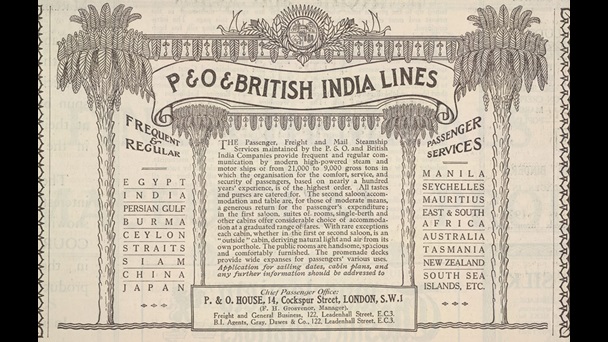 The innovation of steam-powered liners in the early 20th century allowed passengers and goods to travel across the world.

Usage terms © Reproduced by kind permission of P&O Heritage Collection. You may not use this work for commercial purposes. Please credit the copyright holder when reusing this work.

The common perception among ship-owners and the public was that lascars were essential as they could ‘stand the fiercest heat of the tropics better than any other race’. In reality, however, it was their low wages that made them an attractive labour force: while Indian lascars were officially British subjects, they were employed on ‘Asiatic’ contracts, which meant that they received much lower pay than their European counterparts. 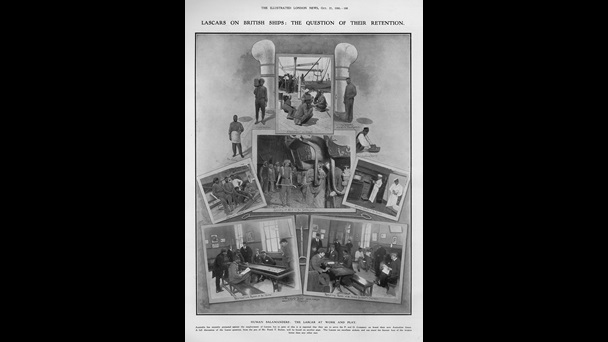 A collage demonstrating the varied roles held by lascars on board ships in the 20th century.

The hard working conditions led some lascars to settle in British ports. Some were pushed to desert their post, or were stranded by lack of employment. They were the earliest Asian working class in Britain.

Asian nannies, known as ayahs, played an essential part in the lives of British families in India. Families returning to Britain often brought ayahs with them to take care of the children on the long sea voyage. Highly experienced and resilient women, some ayahs travelled between both countries several times. Ms Antony Pareira, for example, made the journey on 54 occasions.

Passport of an ayah A passport obtained by Ms Anthony Ayah, which allowed her to fulfil her role as an ayah.

The ayahs usually had no contract of employment, despite offering a crucial service to their employers. Some could even be dismissed with no pay during the journey, while others were discharged on arrival. Ayahs were often left stranded, the families failing to honour the promise of a return passage. While awaiting re-employment, they normally lived in squalid lodging-houses and many had to resort to begging.

Photograph of the exterior of the Ayahs' Home in Hackney A photograph showing both ayahs’ and members of the London City Mission standing on the steps of 4 King Edward Road.

Christian charities were concerned for the welfare of the abandoned ayahs, leading to the founding of the Ayahs’ Home for Indian and Chinese Nannies, opened in Hackney in East London in 1900. The home provided refuge for the ayahs, finding many of them new placements with families travelling out to India. Run by the London City Mission, it had 30 rooms and housed around 100 ayahs each year.

Photograph of the interior of the Ayahs' Home in Hackney A photograph depicting the types of activities ayahs’ engaged with during their stay at the Home, including reading and needlework.

In 1876 Queen Victoria was proclaimed Empress of India, further highlighting the grandeur and importance of India as an imperial possession. It was commonly known as the ‘Jewel in the Crown’.[3] In 1887, within days of the Golden Jubilee celebrations, Abdul Karim and several other Indian servants arrived at the Royal Household. The 24-year-old was ‘tall with fine serious countenance’.[4] Originally a clerk in Agra, Queen Victoria favoured him, promoting him first to the position of Munshi, her teacher of Hindustani, and in 1894 to the post of ‘Indian secretary’, his role being to assist with her ‘boxes’ and correspondences. 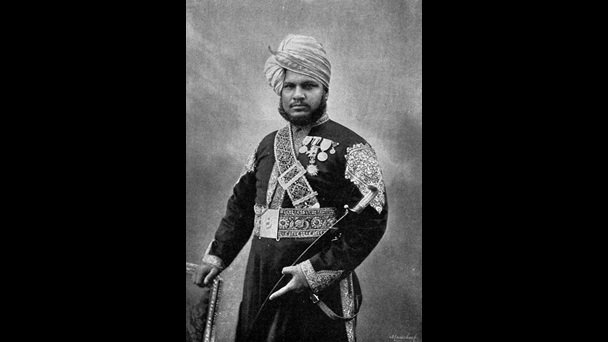 Abdul Karim, in his capacity as 'Munshi' and Indian Secretary, was highly regarded by Queen Victoria - who awarded him with titles, cottages and portraits.

He was rewarded with titles and cottages on the grounds of Royal palaces; Victoria even had his portrait painted. Karim's rise within the household caused controversy from government officials, but Queen Victoria supported him in all cases, accusing the court of ‘race prejudice’.[5] The closer they became, the more the court tried to drive them apart, fearing that he had access to political papers and would pose a threat to the state.

This letter from Lord Ponsonby expresses some of those concerns. This letter tells us that Karim’s presence, in Queen Victoria’s inner circle, was often met with suspicion.

Usage terms © Reproduced by permission of Lord Elgin. Except as otherwise permitted by your national copyright laws this material may not be copied or distributed further.