Discover how early South Asian settlers earned a living and made a home in Britain.

Making a permanent home in Britain was not without its challenges. Over many years of settlement, Asians engaged in a variety of economic activities, demonstrating their resourcefulness and adaptability. Indian sailors settled in many British ports and continued to work as sailors if they could. Others found different forms of income, setting up cafés, lodging and curry houses. Servants advertised for jobs in newspapers, but these positions were not easy to find and prejudice was not far away. Those unable to find employment lived on their wits, working as hawkers, street musicians, crossing sweepers, and even as beggars.

The appalling working conditions of Asian lascar sailors led some to jump ship in Britain. This community of destitute lascars and servants had to find alternative ways of earning a living. Some sold Indian spices, others found odd jobs, worked as street herbalists, or sold Christian tracts. They were the earliest Asian working class settlers in Britain.

London Labour and the London Poor by Henry Mayhew, 1861 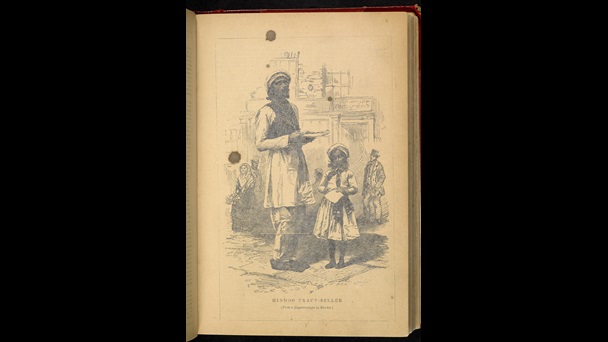 Henry Mayhew, in his work London Labour and the London Poor (1861), recorded the story of a Calcutta-born Asian street musician. The man was married to a white English servant and had a six-year-old son. He had originally come to Britain while working for an English military officer, but following the unexpected death of his employer, he began to play the ‘tom-tom’ drum in the street to make a living. He tells Mayhew that he spent his last ten shillings on the drum, but was willing to do anything to earn his ‘daily bread’ – even to model for street artists.

Mayhew quotes him as follows:

‘I wish very often to return to my own contree, where everyting sheap – living sheap, riche sheap... I suffer dis winter more dan ever I did. I have no flannels, no drawer, now waistcoat, and have cold upon my chest… .I put up many insult in dis contree. I struck sometime in street. Magistrate punish man gave me blow dat left mark on my chin here. Gentlemen sometime save me from harm. Sometime not. De boys call me black dis or de oder. … beat tom-tom, and sing song about greatness of God, in my own language. …I sometime get few shilling from two or three picture-men, who draw me…’

London Labour and the London Poor by Henry Mayhew, 1861 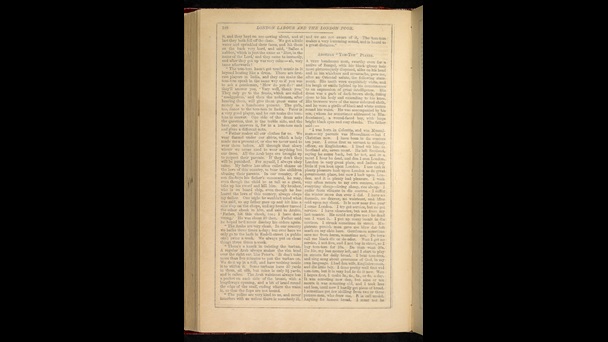 After World War One, a new group of working-class Asians arrived who often worked as pedlars. Many lived in poor areas with run-down housing. With a suitcase full of items of light clothing – shirts, scarves, ties and aprons – they travelled miles in all-weather to build up a clientele. Asian pedlars were a familiar sight in many parts of Britain. They bought and sold consumer goods – often on credit – to areas where shops were few, providing a service on the doorstep.[1] Buttha Mahomed, for example, came to Britain in 1931 and began work peddling goods to domestic households. From Glasgow he travelled all along the west coast of Scotland, arriving in Stornoway, Isle of Lewis, where he settled and continued to work as a pedlar. His descendants still live on the island.

These early Asian settlers set up clubs and societies, and established places of worship – gurdwaras, mosques and temples. As they became integrated within their local geographical communities, Asians from working-class and middle-class backgrounds, like Sake Dean Mahomed and Shapurji Saklatvala, entered inter-racial marriages. Such mixed-race families were often seen as creating a ‘social’ problem. Although they were officially British citizens, equality proved illusory.

One enterprising Asian who became a great success in his day was Sake Dean Mahomed. As a soldier in the East India Company’s Bengal Regiment, he had first settled in Ireland in 1784, in the service of captain Baker with whom he worked for many years. By 1810, he had established the Hindoostanee Coffee House at 34 George Street, London, Britain’s first Indian restaurant run by an Asian owner. This venture, however, failed within two years. 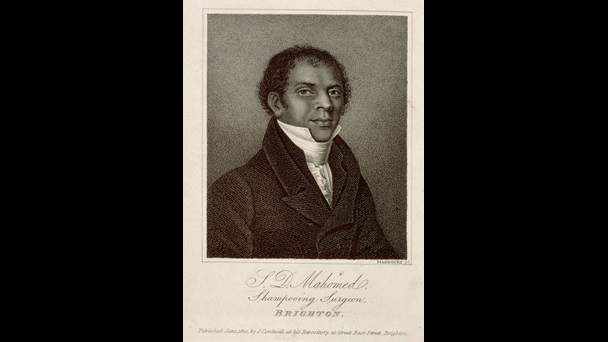 A portrait of Sake Dean Mahomed.

In 1814, Mahomed moved to Brighton, where he set up Mahomed’s Baths, treating patients with muscular ailments with a massage or champi (the origin of the word ‘shampoo’) after a steaming bath of Indian aromatic herbs and oils. Mohamed’s cure worked. He became famous, and fashionable people around the country flocked to his baths. Even doctors sent their patients to Mahomed. In 1822, King George IV appointed him his personal shampooing surgeon, an appointment continued by William IV. Mahomed's Steam and Vapour Sea Water Medicated Baths, where patients were treated for muscular ailments with champi and steaming baths.

Capitalising on his success, in 1822 Mahomed published his medical work, Shampooing or Benefits Resulting from the Use of the Indian Medicated Vapour Bath. It featured many glowing testimonies from his patients. 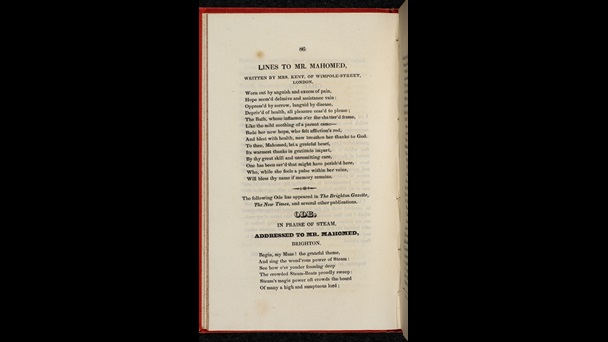 A glowing testimony from Mrs Kent with 'warmest thanks in gratitude' for Sake Dean Mahomed and his champi methods.

From the working classes to royalty, Asians from all classes and backgrounds settled and made home in Britain. Among the middle classes and professionals were doctors, merchants and traders. Some set up Indian Restaurants, like Shafi’s in Gerrard Street, Veeraswamy’s in Regent’s Street and the Koh-I-Noor, with branches in Cambridge and London.

Advertisement for the Koh-I-Noor restaurant in London 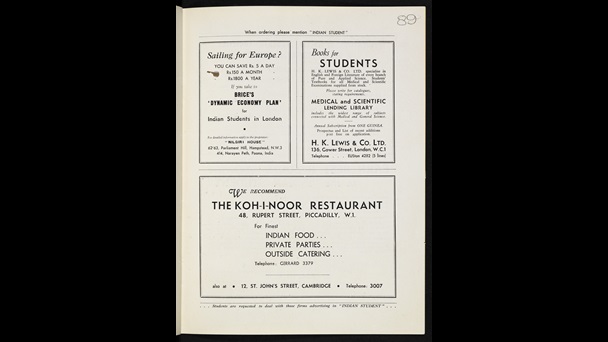 An advertisement for the Koh-I-Noor restaurant in London, which served Indian food and catered for private parties.

In 1926 Veeraswamy’s restaurant was among a number of Indian restaurants and cafés established at the higher end of the market. The restaurant became very popular amongst politicians and nobility. E P Veeraswamy, descendent of William Palmer and Faiz Bux, ran cookery classes and published an Indian cookbook. Today, curries have become part of Britain’s national cuisine, and Indian restaurants can be found in almost every town. 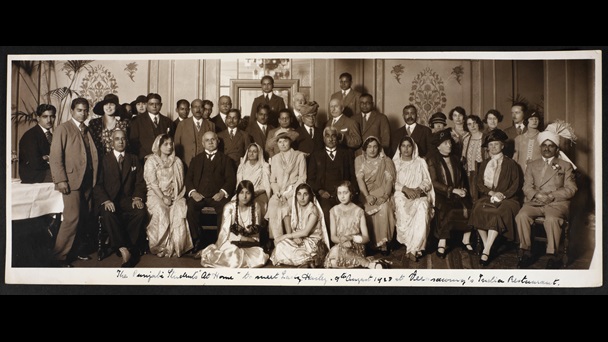 A group of Punjabi students pose for a photo in Veeraswamy’s restaurant on Regent’s Street in 1928.

As advertisements from the 20th century reveal, families and individuals founded Asian shops which catered for a growing demand in spices and condiments. The Bombay Emporium – which imported and manufactured a range of ‘Indian groceries & condiments’, from mango chutney to basmati rice – was established on Tottenham Court Road in 1931.

Advertisement for the Bombay Emporium The Bombay Emporium – which imported and manufactured a range of groceries & condiments, from mango chutney to basmati rice – accommodated the growing demand for Indian cuisine in Britain.