From the largest volunteer army to the secret agent Noor Inayat Khan, uncover the contributions made by South Asians in World War One and Two.

Asian contributions to both World Wars are not widely known about, despite the fact that India raised the world’s largest volunteer armies: 1.5 million in World War One and 2.5 million in World War Two. World War One marked an important watershed. For the first time, Indian soldiers were fighting on European soil. They fought in all the major theatres of war on land, air and sea, alongside British troops. Their many awards for bravery, as well as their war graves and memorials on the battlefields, are testimony to their sacrifice in the service of Britain. Unrecognised for decades, their contributions are only now being fully acknowledged.

In August 1914, soon after the outbreak of war when the British Expeditionary Force had been almost wiped out, Britain called on the Indian Army to fill the vital gap left in its defences. The first 28,500 Indian Army troops arrived on the Western Front on 26 September 1914. They played a crucial role in holding the line and are said to have arrived just ‘in the nick of time’.[1] Indian soldiers were deployed widely and fought in the battles of Ypres, Neuve Chapelle, the Somme and Passchendaele and in even greater number in Mesopotamia.

Highlanders and Dogras in a trench 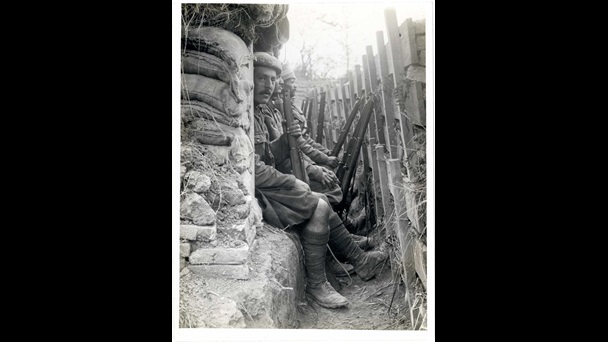 A photograph of Indian Dogras and Highlanders in a trench in World War One.

Indian soldiers did not fight as a separate army, but alongside British units, which led to a certain amount of social interaction. These contacts were fostered by the common experience of the horrors of trench warfare. This photograph shows the 3rd Horses regiment playing football against the 18th Lancers in July 1915, with a group of French children looking on. 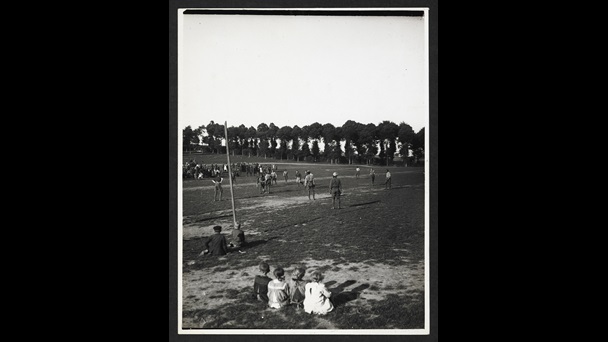 This photograph shows the 3rd Horses regiment playing football against the 18th Lancers in July 1915, with a group of French children looking on. 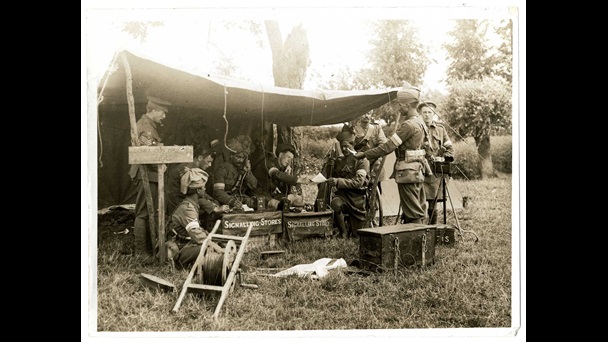 This photograph shows a group of soldiers working together at a signal station for the Dehra Dun Brigade.

This photograph shows an Indian cavalry horse hospital in a French factory in 1915. Cavalry divisions still played a crucial role in warfare at the outbreak of World War One and the British Army saw cavalry charges and mounted infantry as tactically crucial throughout the war. The Indian Army supplied the 1st and 2nd cavalry divisions, which saw action on the Western Front. They stayed in France until the end of the war, fighting in the battles of the Somme and Passchendale. 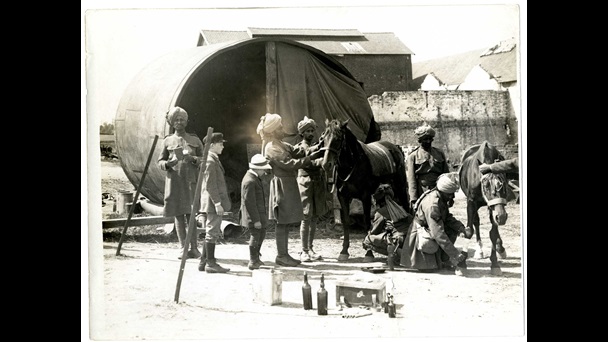 A photograph of an Indian Cavalry horse hospital set up in a French factory, 25 July 1915.

Indra Lal Roy came to Britain for his schooling in 1908. Keen to join Britain’s war effort, he enlisted with the Royal Flying Corps, the precursor of the Royal Air Force (RAF). He had to overcome many obstacles to receive his commission. He flew as part of George McElroy’s Squadron 40 and was a successful fighter pilot. Between 6 and 19 July 1918, in only 170 hours and 15 minutes of flying time, he shot down 10 enemy aircraft. He died in action, aged 19, on 22 July 1918. He was posthumously awarded the Distinguished Flying Cross.

Hasty arrangements for wounded Indian soldiers had to be made in Britain after plans to create hospitals in France and Egypt fell through. Hospitals were built near the south coast where ships from France were docking.

Photograph of a bagpiper performing for soldiers A photograph of soldiers gathered around a bagpiper in Brighton.

The most spectacular of these military hospitals was the converted Royal Pavilion in Brighton, built in the ‘oriental’ style for George IV in the early 1800s. The Brighton Pavilion housed over 600 Indian wounded from the Western Front. Indian Medical Service doctors cared for them with the assistance of Indian Students, recruited by Gandhi into the Indian Field Ambulance Training Corps.

Several other buildings in Brighton were converted, including a secondary school. The converted infirmary and workhouse, which accommodated some 1500 patients, was named the Kitchener hospital. The Dome Hospital in Brighton, which had 680 beds for wounded Indian soldiers

The India Office and War Office wanted Indian soldiers to receive the same level of care as their British counterparts. Indian-style food was provided for their tastes, and the Indian-style pavilion hospital was considered to help the fighters feel ‘at home’. Burial rights were also observed according to the respective religions of the fallen. However, though complimentary about the care they received, letters reveal that soldiers were critical of the restrictions placed on their movement. Chaperoned at every occasion, with every outing carefully stage-managed, many felt like prisoners.

Letter about the burial of Muslim Indian soldiers The Maulvie at the Mosque in Woking issued this statement in 1915 to draw attention to the way Indian soldiers were treated during their burial, and highlights some solutions to create a respectful process.

The large number of Indian wounded in the military hospitals along Britain’s southern coast brought with it the need for appropriate burial provisions, as some soldiers did not survive their injuries. The burial ground near the Woking Mosque received the bodies of 21 Muslim soldiers. 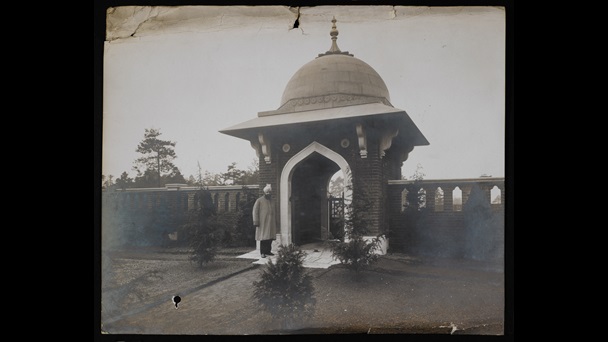 The Muslim burial ground, opened in 1917, housed the bodies of Indian Army soldiers who had lost their lives in the six hospitals along the South Coast of England.

Gurkha, Hindu and Sikh soldiers were cremated on the South Downs near Patcham where three concrete platforms mark the place of the cremations. In all, 53 soldiers were cremated there. The Chattri, unveiled there in 1921, is a lasting memorial to the fallen Indian soldiers of World War One. Every year in June, a remembrance service is held at the site.

In World War Two, the Indian Army was called on once more to support Britain in its war effort and the fight against fascism. India supplied vital raw materials and manpower. While India raised one of the largest volunteer armies in the world, many Asian sailors worked on merchant ships to help keep the supply lines open and assist troop movements. In Britain Asians worked in factories, but also as Air Raid Precaution Wardens, nurses and firemen.

India at war: a record and a review These artillerymen were praised for their teamwork, which produced efficient and accurate gunnery.

Ambassadors of Goodwill, accounts of the Bevin apprentices

This pamphlet contains a selection of short essays by the Bevin apprentices, and forms a part of a collection of publicity materials to highlight India's contribution to the war effort.

The Indian Comforts Fund, founded in December 1939, was based at India House, Aldwych. Run by British and Indian women, it offered humanitarian relief work. A welfare organisation looking after Indian soldiers stationed in Britain, it was also responsible for all Asian Prisoners of War in Europe. The Fund supplied some 1.7 million food parcels between 1939 and 1945. It also played an important role in providing warm clothes and funding for better facilities in lodging houses for the large number of Asian lascar seamen in the Merchant and Indian navies.

Photographic collage of the packing centre for the Indian Comforts Fund 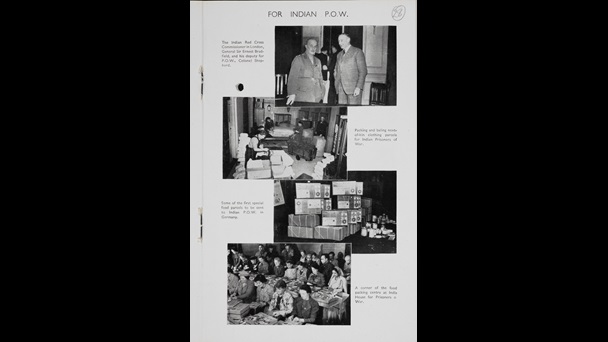 The Indian Comforts Fund was set up in part to provide humanitarian aid for Indian prisoners of war, who were being held across Europe. This collage shows some of the 1.5 million clothing and food parcels that were packaged and sent to the Red Cross in Geneva.

Noor Inayat Khan was the daughter of Inayat Khan, musician and founder of the Sufi order in Europe. In 1942, she was recruited into the Special Operations Executive (SOE), a secret organisation sabotaging the German war machine. She was one of the first female wireless operators infiltrated into occupied France. On arrival she found that her unit had already been betrayed.

As the last remaining wireless operator in France she continued to transmit messages to London. In 1943, the Gestapo captured her. Although tortured, she refused to reveal any information. In September 1944 she was transferred to Dachau concentration camp, where she was executed. Khan was posthumously awarded the Croix de Guerre with Gold Star by the French Republic and in 1949 the George Cross by the British Government. In 2012, following a campaign led by the Noor Inayat Khan Memorial Trust, a permanent memorial for her was unveiled in Gordon Square, London. A photograph of Noor Inayat Khan, who served as a wireless operator with F Section, Special Operations Executive in World War Two.

When the RAF advertised to cover the shortage in qualified pilots, 24 Asians answered Britain’s call. 18 successfully passed their training and flew missions in Spitfires, Hurricanes and Lancaster bombers. Among them was fighter pilot Mahinder Singh Pujji, who served with both the RAF and Indian Air Force. He flew missions over the English Channel with squadrons 43 and 258 between 1940–41, and also fought in North Africa and Burma. In 1945 he was awarded the Distinguished Flying Cross.

Photograph of Indian pilots arriving in the UK 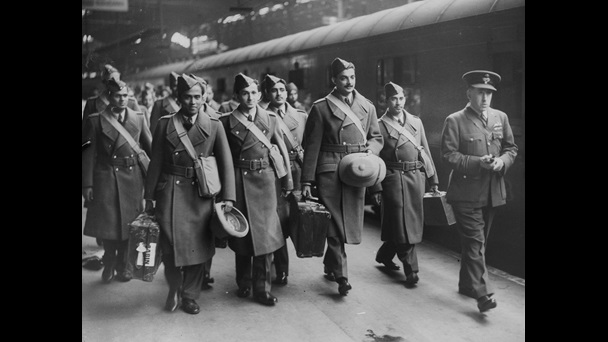 A photograph of the first group of Indian pilots arriving in the UK in 1940.

India at war: a record and a review Pictured is Prithpal Singh, an Indian officer in the Royal Air Force.