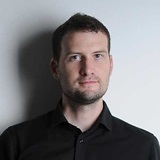 Alexis Bennett is an Associate Lecturer at Goldsmiths, University of London, and a performer and composer. He was an Edison Fellow at the British Library where he researched material relevant for his PhD thesis on British film music of the 1930s.

The research I did as an Edison Fellow at the British Library in 2015-16 was invaluable for my PhD thesis on British film music in the early years of sound cinema.

For me, the Library's most interesting material was a collection of uncatalogued sound recordings made by the Romanian-born composer Francis Chagrin, who worked on several films in London in the 1930s. Chagrin was an example of a composer who came to London from an increasingly belligerent Europe. He contributed scores to the rapidly changing filmmaking scene and worked extensively for the BBC French Service, writing music for propaganda broadcast to occupied France.

My work on Chagrin resulted in:

My thesis argues that 1930s British film music has been neglected by scholars because of the complex fabric of styles and traditions that fed into various film music practices. I also explore the implications of new technology as applied to film. Paradoxically, many British films from this period had no music at all, since there were factions in the industry who thought that the coming of sound and recorded dialogue meant that music was useless.

The British Library also helped me investige two mysterious lacquer discs that I found at my family home. These are now catalogued and kept in the Library.