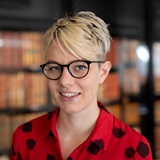 Alice is undertaking an AHRC collaborative PhD with the British Library and Queen Mary, University of London on Hans Sloane’s Library and its material connections.

I am incredibly lucky to be working within an institution that encourages self-reflection.

In 1753, the physician, scientist and collector Hans Sloane died, bequeathing his collections of books, plant specimens, fossils, stuffed animals and much more to the nation for a bargain price of only £20,000 to be paid to his heirs. This was to become one of the foundation collections of the British Museum, and thus also the Natural History Museum and the British Library.

Approaching a project in which the parameters had been as broadly defined as ‘discuss this library, or this collection of books’, the obvious starting point was to define exactly what I meant by those terms. Coming from an English Literature background with a particular interest in the material Early Modern book, I am always interested in pushing at the boundaries: is a library simply a collection of books, placing the field of historical library studies comfortably within that of collection history, or is there something else going on? In this sense, Sloane’s collection both is and isn’t like other early collections at the British Library. Its roots go much deeper into the question of what does and doesn’t belong where.

Working with the Sloane Printed Books team has meant that I have had been able to use the data which they have created, an invaluable resource without which it would be impossible to get a grasp on such a huge collection (well over 40,000 books). Since my project is constantly asking what it means to say that something belongs in a library at all, it allows me to look at some of the most interesting, esoteric and beautiful items held by the British Library: maps, manuscripts, prints, and a sample of elephant skin…

Institutional history has had an unavoidably large impact on my work, so I am incredibly lucky to be working within an institution that encourages self-reflection. There is a fascinating tension between the necessities that result from practicalities within a library and the fluid, amorphous Early Modern concepts which I am thinking about. Luckily, the support and access I have at the British Library makes this a productive rather than daunting prospect!