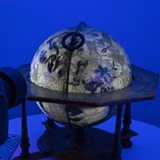 Using 3D photography, the British Library's rare and fragile collection of historical globes have been digitised and made available for the public to discover via augmented reality

This project makes a number of our most important globes available beyond the British Library’s Reading Rooms and exhibition galleries, to a wider audience and in a more imaginative way than ever before.

Historical globes are a little-known yet fascinating element of the British Library’s map collection, which totals approximately 4 million items and includes one of the world’s largest atlases, the Klencke Atlas.

Dating from between around 1600 and 1950, these terrestrial and celestial globes represent three centuries of western scholarly knowledge concerning the world and cosmos.

As part of our Heritage Made Digital project, we have photographed the surfaces of a third of these globes to produce virtual 3D models for anyone to access online for free.

These invaluable historic globes are some of our most fragile collection items. Access has, until now, been restricted due to their condition and special handling requirements.

Prior to digitisation, they had never been photographed in their entirety, meaning that very few researchers could actually view them.

The entire surfaces of 32 of our most significant historic globes were photographed using our in-house 3D imaging system. These images were then assembled into virtual 3D models, with the assistance of the digitisation company Cyreal.

With recent advances in 3D scanning technology, the models were constructed to sub-millimetre accuracy and benefited from multi-camera focus-stacking.

This was an opportunity to create digital surrogates of the globes to open up access, while restricting the handling of these fragile collection items.

High-quality interactive content is now freely available for researchers to view on our Maps website or via a Sketchfab platform, which includes an augmented reality setting (available on phone or tablet via the Sketchfab app). This allows unprecedented up-close interaction with the globes from anywhere in the world.

As a result of the digitisation:

…“As custodians of this invaluable Elgar manuscript, it’s a joy to open up access to it online. We were very impressed by Eugenio’s meticulous handling of the score and the two Newman manuscripts of the poem and are delighted with the final images.” Daniel Joyce, Librarian & Archivist, Birmingham Oratory …

…"We were delighted with the British Library service offering onsite photography at our convenience: it was efficient and enjoyable, and produced the most beautiful images." John Sunderland, Friends of Malmesbury Abbey…

Malmesbury and its Abbey, had one of the most important libraries in Europe in the Middle Ages, and the famous historian William was from Malmesbury. The Friends of Malmesbury Abbey commissioned the British Library to digitise four volumes of the bible, known as the Malmesbury Bible earlier this summer.

…This project makes a number of our most important globes available beyond the British Library’s Reading Rooms and exhibition galleries, to a wider audience and in a more imaginative way than ever before.…

Using 3D photography, the British Library’s rare and fragile collection of historical globes have been digitised and made available for the public to discover via augmented reality.