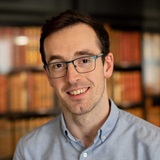 Dominic's AHRC funded collaborative PhD with the University of Liverpool and the British Library explores the political and social functions of published music in the long eighteenth century. His research examines the historical networks of the music trade focusing on how ideas were transmitted through musical print.

Book historical research has transformed the way we look at books and their role in society.

In recent years book historical research has transformed the way we look at books and their role in society. The study of print culture now extends far beyond viewing the book as a simple conduit for the text and opens up to questions of authorship, production and dissemination. Whilst this broad approach is allowing scholars to achieve a more thorough understanding of the impact of print culture on society, these methods have not yet been applied to music publications.

The Eighteenth century was a pivotal moment for both music and literary print, together they experienced a dramatic growth in production and consumption, were intertwined with the wider networks of the print trade, and were consumed, at least in part, within the same cultural milieu. The broad aim of my research is to draw music publications back into the book historical lens, making steps towards a more complete understanding of print culture through the social and political impact of printed music.

The foundation of my research is a database of the publishers, printers, and engravers of eighteenth-century London. Through trade directories, catalogues, insurance records, and newspaper advertisements I will identify the people who were producing music, opening up my research to questions of class, gender, politics, and place. The next step will be to map this data, using Historical GIS software, to establish the social, economic, and cultural trajectory of the trade and to allow for a comparative history with similar studies of literary print.

The British Library’s printed music collection will be invaluable in establishing how the output of music publishers contributed to the cultural fabric of the period. Having identified the publishers working in the industry I will then analyse the paratextual additions in their printed music (graphic images, frontispiece decorations, titles and subtitles, forewords, dedications, prefaces, intertitles and notes) to shed light on how the agency of the publisher is articulated in these publications and how the score, as a part of print culture, reflected eighteenth-century social and political life.