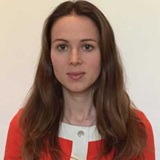 Evgeniya is a PhD student at Goldsmiths, University of London researching the relationship between music and British images of the USSR during the Cold War. She attended the Library’s Music Doctoral Open Day in February 2017.

Attending the Music Open Day has really broadened my understanding of what can be done in my field using the British Library’s resources and collections.

My PhD research looks at how music recordings can function as an ideological instrument. In particular, it examines their role in creating an image of the USSR in the eyes of the British public during the Cold War.

Over the course of several months I photographed 210 LP covers of Soviet classical music from the British Library holdings. I analysed the imagery and sleeve notes to establish the perception and presentation of Soviet classical music in the UK during the 1960s and 70s. To complement that, I studied reviews and articles on Soviet music in magazines such as Billboard and Gramophone. I have presented my findings at an international conference on East-West cultural relations and am turning this research into a journal article for publication.

After attending the British Library Open Day I realized how vast the resources of the Library are, beyond what I had already used in the Sound Archive. I was especially fascinated by the opportunities presented by the digital research team, something I hadn't previously thought about in application to my topic. Learning how digital technologies can be applied to musical analysis has given me many new ideas – the next step is to try and utilise them in my research.