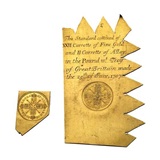 The Goldsmiths’ Company Library is the UK’s biggest specialist resource for researching silversmithing and jewellery, and has embarked upon an ambitious project to put its collections online by 2027, to mark the company’s 700th anniversary.  Deputy Librarian Sophia Tobin describes how the British Library’s free metadata service is helping to deliver its Online Public Access Catalogue earlier than planned

The Goldsmiths’ Company Library’s computer catalogue was not publicly accessible, and was not compliant with MARC 21 (an international format for exchange of catalogue records). We started a project to get our Library catalogue online in time for the Company’s 700th anniversary in 2027. It soon became clear that the British Library’s Z39.50 free MARC 21 data service would be a central plank in our strategy, allowing us to import ‘clean’, MARC 21 compliant records to which we could add our specialised data. For a Library which has always placed emphasis on manual cataloguing, the idea of importing free records seemed almost magical.

We procured our very first Library Management System in 2020.  The majority of the initial data load came via the British Library’s Z39.50 service.  In total we obtained 3,417 clean bibliographic records from the British Library. Some records were also obtained from Library of Congress. Whilst much work remains to be done, the Z39.50 data service has allowed us to get our system up and running far sooner than we thought. It also supports cataloguing of new books by delivering (MARC 21 and RDA compliant) records which we can enrich with our local data. Availability of these records has freed staff to concentrate on subject analysis and summaries. Consequently, we hope to launch the first version of our Online Public Access Catalogue in the second half of 2021, far sooner than we thought possible.