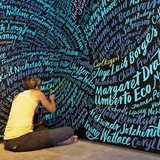 ...there was an obvious starting point - the archives of the British Library...

In 2016, Hachette UK, the UK’s second largest book publisher, brought its 9 publishing houses together under one roof in their new riverside offices on Victoria Embankment, London.

The Graphic History Company was commissioned to unlock the histories of all 9 publishing houses and weave them together into a cohesive story, while also respecting the proud independence of each publishing house in the group.

We wanted to tell as full a history as we could - going right back to the origins of the oldest division of the company, John Murray Publishing, founded in 1768. To access such historic data there was an obvious starting point - the archives of the British Library. Working with the British Library, we agreed the criteria necessary to identify every author and book title published by each of the 9 publishing houses within the Hachette Group to create a comprehensive database spanning 250 years.

This yielded a list of over 55,000 authors, including a number of important historic authors whose connection with the company had been lost in the mists of time. From this enormous list, we created a priority list of 5,000 of the most prominent authors, including Charles Darwin, Jane Austen, Bram Stoker, Daphne du Maurier, Nelson Mandela, Goscinny & Uderzo, JK Rowling and Malala Yousafzai.

We then created a giant mural,spanning 8 floors and 450 square metres of wall space,featuring all 5,000 author names in chronological order. We designed the mural in the shape and colours of a river reflecting the twists and turns of great stories as well as the riverside location of Hachette's offices. Each name is hand drawn and colour coded to the publishing house who first published them, giving each publishing house its own identity within a cohesive whole. New authors names are added every year, making the mural a living and growing homage to Hachette and its writers.

Boost your library and publishing services with our bibliographic metadata and standards.