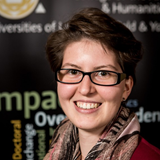 Helen's AHRC funded collaborative PhD with the British Library and the University of Leeds explores the working life of the British evolutionary biologist John Maynard Smith (1920-2004) through his archive and both his popular and professional writings.

You get to know how people work in an institution like this... it's something I would like to do as well.

Why age? What is the point of sex? Why do animals fight - but then try not to hurt each other too badly? John Maynard Smith (1920-2004) spent half a century answering these and other questions in evolutionary biology - often by 'doing the sums', given his mathematical abilities and first career in engineering. Today he is best known for the development of evolutionary game theory and evolutionarily stable strategies (ESS), which the British voted to be the 61st-most important British innovation of the 20th century.

My thesis studies Maynard Smith's archive (Add MS 86569-86841 in the Archives and Manuscripts Catalogue) and his popular and professional writings against the backdrop of the history of 20th-century evolutionary biology. Combining the correspondence, notes and papers in the archive with published material by and on Maynard Smith, I focus on his working life and aspects of science communication.

Maynard Smith’s working life also saw the rise of computers in science, evidence of which are the reams of printouts now stored in archival boxes. More recent material is kept on floppy disks and hard drives, making Maynard Smith’s archive a prime example of the increasingly common hybrid archives that have both paper and (born-)digital material. As part of my project I will contribute to the processing and cataloguing of this born-digital material to make it available to researchers.

Writing and speaking about my research forms another part of my work. As such I present at national and international academic conferences and, together with fellow PhD researchers like Emmeline Ledgerwood, I organised two academic workshops myself. A completely and wonderfully different way of talking about the history of science was the result of a collaboration with Undercurrent Theatre, the British Library’s first associate theatre company: I scripted a performance based on letters in the science archives. We presented it for the first time in May 2018 in front of a full house, re-staged it as part of the British Science Week on 15 March 2019 and recorded the event as a podcast.

Evolutionist Maynard Smith on Science and Religion (talk, 12 November 2018). Available as a podcast.

You can read more about Helen's research on her university profile.