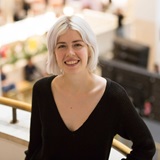 The British Library is home to countless experts whose passion makes navigating its enormous collections a pleasure.

I came to the British Library through its PhD research placement scheme, for which I spent three months under the supervision of Diana Siclovan. Together we planned a Treasures Gallery display (opening May 2018) that examines the life of Karl Marx and his relationship to the Library, which was something of an intellectual home for him during his thirty years in London. I was involved in various aspects of the planning process, including material sourcing, designing events, writing associated blogs, and forming the narrative structure of the display.

Sourcing materials for the exhibition meant following a number of unusual leads, as we don't have a dedicated 'Marx collection'. The Corporate Archives hold the library's donation registers, which record book donations made throughout the 19th and early 20th century. Searching through these brought us to a series of staggered entries for the French edition of Capital. This previously unknown first-edition copy was donated by Marx himself and contains several marginal annotations in the author's hand. The archives also held a charming in-letter from the library's former administrators concerning the delivery of this canonical text. These were exciting discoveries, and narrowing down the final range of material was a hard task!

The British Library is home to countless experts whose passion makes navigating its enormous collections a pleasure, and so new avenues of exploration were always opening before me. Marx's circle held a number of interesting characters, each just as headstrong and contrary as Marx himself. His daughter Eleanor, about and from whom we have a substantial collection, led a fascinating political life. A large part of my research examined the impact that she had on her father's legacy in Britain, as well as that of others responsible for disseminating his ideas following his death. Finding a narrative that remained true to Marx and his life without shrinking from the controversy his ideas later caused was an important preoccupation that required a lot of biographical reading. The events programme will reflect this concern, and many of the most original and interesting thinkers on Marx are involved.