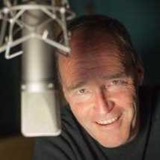 Audio-book narrator Jeff Harding, registered for his PLR share in an astonishing 658 audio books when the extension of UK PLR to non-print material was first introduced in July 2014. He currently has over 700 titles registered.  Jeff describes the skills of narration and explains what PLR means to him.

“I expected pennies and I got pounds! Quite a few more than I had expected. How many times in somebodies life do you get something for nothing?”

Trained as an actor in the USA and with a number of film and TV credits to his name, Jeff Harding has been recording audio-books since he first moved to the UK. Having started small by  recording for the charity Talking Books (now Listening Books), he became a full time narrator five years ago – and he loves it! He has recorded Clive Cussler’s Robert Ludlum titles, a slew of Lee Child thrillers including his best-selling, and most-borrowed, Jack Reacher  series, and the darkly humorous novels of Carl Hiassen and Lemony Snicket. Most recently, he has just recorded Homer’s The Illiad - 853 pages in verse! Preparing to read any book is a challenge to be taken seriously. Jeff’s preparation for each title is meticulous, “I read it very slowly moving my lips but not saying it out loud. I mark-up difficulties and I look up how to pronounce names. I make a character list so that I know exactly who is who – that helps to get the conversation right!’  But, preparation aside, Jeff’s biggest tip is “keep it lively”.

It was Jeff’s audio-book publisher Isis who put him onto registering the titles for PLR and provided him with most of the ISBNs. “I knew the audio-books were sold into libraries but we get very little feedback. I certainly didn’t know how often they were going out."