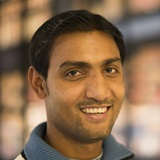 Junaid-Ul-Hassan is a Chevening Fellow working at the British Library on a one-year-long project titled ‘News and Media in South Asia: Past and Present’. The project focuses on the enhancement of the Library’s catalogue records to make it more user-friendly for researchers.

The BL Newspaper collections are vast and in many cases also rare and unique in their content and collection histories.

My project aimed at reviewing the British Library's catalogue of serial publications to improve the records for the oriental collection of newspapers and periodicals. The serial publications from the India Office library collection include annual reports, journals, newspapers, monographic series, almanacs and others serials that were published with varying regularity in different oriental and European languages.

In the records metadata, most of the serial items were marked as periodicals. This has made it difficult to filter the periodicals and to locate records that actually refer to newspapers. This wrong classification has reduced the accuracy and functionality of the catalogue's search function. It has also affected newspapers published in European languages, as 214 titles from the eighteenth century were falsely marked as periodicals.

These records were corrected using following the steps:

Newspaper censorship reports produced under British rule from the 1930s onwards proved highly useful for this project, as they contain bibliographical data related to the newspapers' and periodicals' owners as well as additional information such as the proprietor, keeper and publishers' names. These reports also provide an insight into media news trends in particular years and the government responses towards them.

The contribution of my project to the British Library will be an enhanced list of newspapers, which will help it develop future initiatives to digitize the newspapers published in Roman scripts.

This project has been immensely helpful for me, as it has given me an opportunity to enhance my skills by interacting and learning from many different professionals across the British Library, such as curators, cataloguers, conservators and acquisitions teams responsible for processing and managing collection items.