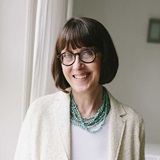 “I have come to think of the British Library as a gym for writers.”

In my earlier career, I was a print journalist who specialized in subjects as far-ranging as fashion design, architecture, and cuisine - topics all connected by creativity. My profession put me in touch with thousands of people who make things, and their stories in turn made me wonder what enables someone to step out into the world as a creative person. So that’s the matter at the heart of my ongoing doctoral research.

During my first semester at the University of Westminster, my PhD director suggested I attend the British Library’s Open Day for media and arts scholars. It was excellent advice, as I met other researchers, got a clearer picture of the library’s resources, spoke to some of the staff, and found the Newsroom, a place where I understandably felt at home.

Importantly, the library became the setting for the readings that influenced what has become my multi-disciplinary way of explaining what creative people go through before they feel - well - creative. Affordance theory, which I first encountered in the Newsroom one evening stumbling across J.J. Gibson’s seminal 1970s writings in ecological psychology, considers the role of aspects in the environment that influence an organism’s actions. It became the axis my thesis revolves around.

It is hardly a stretch for me to think of the British Library as a creative affordance that has transformed my research. Access to far-flung segments of the literature and staff assistance in locating otherwise elusive papers have made it a resource that I can’t imagine being without.

Even more to the point, it has enhanced my relationship with writing. Writing is ultimately a solitary effort. Yet my experience at the library helped me understand the importance of having people nearby who are writing too. Indeed, I have come to think of the British Library as a gym for writers. Industry positively radiates through the reading rooms. And the affordance of having everyone around me intently working spurs me on to do the same.

You’ll find British and overseas newspapers dating back to the 1600s and we have growing collections of radio, television and web news