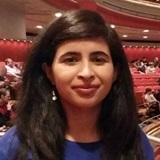 Neema is a PhD student at the School of Sociology, Politics and International Studies (SPAIS),
University of Bristol. She used the UK Web Archive to find out what ethnic minorities thought about the EU Referendum.

The UK Web Archive is a fantastic resource for researchers

During my PhD placement at the British Library, I worked with the UK Web Archive collections on the 2015 General Election and 2016 EU Referendum. These Special Collections boast over 7000 websites including those of candidates, interest groups, think tanks and political parties captured around the time of the election and referendum. I analysed the websites of ethnic minority interest groups to build up a picture of attitudes towards Europe among different communities and how they intended to vote in the Referendum.

My placement has undoubtedly enhanced my research and broadened what is possible for my PhD. The UK Web Archives is a fantastic resource for researchers and full of untapped potential. The archival material uncovers a rich and complex picture of attitudes, concerns and identities among ethnic minority groups. It complicates the assumptions of who and what ethnic minorities are voting for.

The majority of ethnic minorities voted to remain in the EU. I found that arguments put forward in favour of Remain by ethnic minority interest groups online included the UK and mainland Europe as stronger together when it comes to tackling racism, and the EU’s legislative framework on race equality holding the UK and other member states to account. There was also concern expressed that a victory for Vote Leave would reinforce ultra-nationalist far-right sentiments.

However, the EU Referendum collection also points to potential Euroscepticism and opposition to European immigration among some ethnic minority interest groups. Groups such as Africans for Britain and Muslims for Britain argued that Black and Asian people have a strong connection to Britain having come from Commonwealth countries and they therefore felt it was unfair that EU citizens could easily come and settle in the UK. Moreover, they maintained that leaving Europe would allow Britain to trade more freely with the Commonwealth.